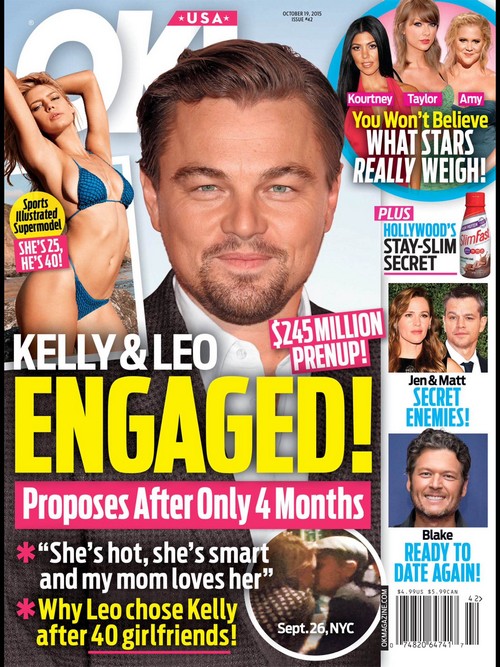 Leonardo DiCaprio is engaged to marry his girlfriend of four months, bikini model Kelly Rohrbach. DiCaprio has been rotating through a steady stream of models for years, but the prolific bachelor is apparently ready to finally settle down and get married – hey, better late than never! According to a new report, Leo popped the question with a modest proposal and Kelly Rohrbach gleefully said “yes.”

This week’s cover of OK! Magazine features Leonardo DiCaprio, and the headline shouts, “Kelly & Leo Engaged! Why Leo Chose Kelly After 40 Girlfriends!” The cover also goes on to tease that the couple is hatching out a $245 Million prenuptial agreement, and Leonardo’s mother is reportedly smitten with his new fiancé, and can’t wait to welcome her in to the family officially.

Leonardo DiCaprio isn’t one to normally make a commitment – but according to OK! Magazine’s inside sources, he had to lock down Kelly Rohrbach, because he isn’t like his other girlfriends. An insider dished to the tabloid, “Kelly is incredibly smart and she understands Leo. She shares his passion for tackling social issues like global warming and world poverty. They connect on an intellectual level, which is new for him. She is more than just a pretty face.”

Despite the fact that Leo is worth hundreds of millions of dollars, the actor’s proposal was small and sweet. On September 26 he and Kelly enjoyed dinner at an Italian restaurant in Manhattan – and he asked her to marry him right there at the dinner table!

So, when is the wedding? According to OK! Magazine, the couple hasn’t even set a date and has no desire to any time soon. Apparently, they are considering eloping – or having a small and private ceremony. Right now the happy couple is focused on moving Kelly in to Leo’s Los Angeles home – and hashing out a prenup.

Are you shocked that Leonardo DiCaprio is finally getting married? Do you think he and Kelly Rohrbach have a future together, or will they never make it down the aisle? Let us know what you think in the comments below!