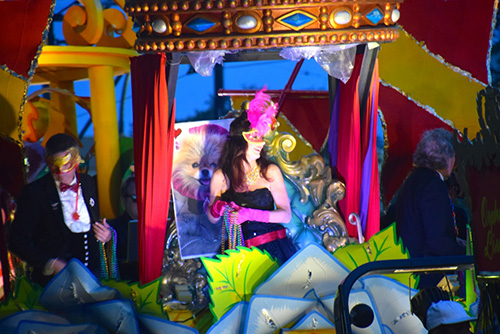 Mardi Gras, or Fat Tuesday 2015, has arrived in the Big Easy and Real Housewives of Beverly Hills star Lisa Vanderpump was given a new role last night. Lisa Vanderpump was crowned Monarch of Orpheus in New Orleans on Lundi Gras, the Monday before Mardi Gras. The Orpheus Parade is New Orleans’ born singer and composer Harry Connick Jr’s baby and is always a celebrity-laden extravaganza. Vanderpump ruled as Monarch with a poster of her pup, Giggy, on board and husband, Ken Todd, at her side tossing beads and favors at cheering parade goers.

Vanderpump told local FOX affiliate WVUE, “Mardi Gras and New Orleans – it’s an incredible experience to be here. We have gumbos in our restaurants, absolutely,” she said. “I have a great affinity for the city and its food with the French Quarter here.”

Also parading in Orpheus was country superstar and singer Dierks Bentley. He was scheduled to perform as the headliner at the Ball following the parade. Members of the cast of NCIS: New Orleans, including Lucas Black, Zoe McLellan, Rob Kerkovich, and C.C.H. Pounder, along with their writer-producer Gary Glasberg, also joined in the fray. Ribald comedian Ron White led the procession. Also on board White’s float was his wife, singer Margo Rey, who was scheduled to perform later that night.

One of the many parades (or Krewes, as they are known in New Orleans), is held in the streets of the city and ends at their grand Ball – or Orpheuscapade. The Krewe of Orpheus, like all Mardi Gras Krewes, derives its name from Greek Mythology, Orpheus, being the son of the god Apollo and the muse Calliope. The formal Ball features multiple musical guests and celebrities ending at 3 a.m. and followed by a Mardi Gras morning breakfast.

Comedian Ron White, per New Orleans local FOX affiliate WVUE, shared, “The culture of this city embraces the kind of behavior I like,” he said. “I never get bored in New Orleans.” White, known for delivering his stand-up comedy routines with a glass of bourbon in one hand and a cigar in the other, also added, “I’m going to be able to drink all night”.

Check out the photo gallery we have for you below and let us know what you think about this Mardi Gras celebration!