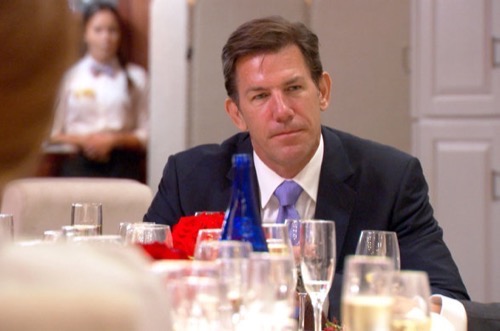 Tonight on Bravo Southern Charm returns with an all new Monday March 23, season 2 episode 2 called, “Guess Who’s Coming to Dinner,” and we have your weekly recap below. On tonight’s episode, Thomas Ravenel invites the gang to another one of his unpredictable dinner parties and this time he and Kathryn Calhoun Dennis have some big news to share.

On the last episode, a second christening was planned for Thomas and Kathryn’s daughter. Shep invited an old friend to the big event, while Whitney arrived late in the season 2 opener. Did you watch the last episode? If you missed it, we have a full and detailed recap right here for you.

On tonight’s show as per the Bravo synopsis, “Thomas invites the gang to another one of his unpredictable dinner parties and this time he and Kathryn have some big news to share. As Cameran continues chasing her real estate dreams, Craig refuses to settle into office life. Meanwhile, Landon is ready to leave her old LA life behind and get back a Southern Lifestyle.”

Tonight’s episode is going to be another drama packed one, which you won’t want to miss. So be sure to tune in for our live coverage of Bravos’ Southern Charm Season 2 episode 2— tonight at 10PM EST! While you wait for our recap, hit the comments and let us know how excited you are about the new episode of Southern Charm tonight.

Landon, a mixture of both the typical and nontraditional southern girl, is definitely someone to watch on tonight’s all new episode of “Southern Charm”. Because while she seems to be easy breezy about life and wants to remain noncommittal – she has someone like Shep wrapped around her finger. Apparently those two met back in college and since then they’ve been really good friends. Yet there was never a time where they could have had something more.

She eventually moved away and then was later married. And now, all of sudden, she’s back and divorced. So in other words it’s the perfect time for someone like Shep, who might have missed his chance way back when, to finally go after the girl.

But will he grab this golden opportunity or is still afraid of anything that comes across as settling down?

You see the guys on “Southern Charm” tend to take the word bachelor to whole new level. Almost as if when they say they want to have a quiet family life they actually do so to please their overbearing family. A good example of this would be Whitney. Whitney is the kind of guy whose words and actions rarely match up. He tells his mother that he’s going to give her grandchildren one day but then he drags his feett about it. And does his best to hide from other people’s children like Thomas’s in the meanwhile.

So, out of the group, the one guy that did end up settling down – in fact did so when his hand was forced. Nothing against baby Kensington but she was a surprise. And since her arrival, her parents have been adjusting as best as they can.

Meaning Thomas expects Kathryn to be the traditional housewife. It seems he wants to have dinner cooked and ready during a certain time. And he also wants Kathryn to focus on the running of the house instead of offering opinions about how she can help with his upcoming campaign.

As for Kathryn, she continues to be suffocating in her new role despite trying her best. The young woman, because she is still young, wants to be around friends and occasionally go out to have some fun. But what with a new baby and a boyfriend that view their semi-marital state a certain way – Kathryn is growing frustrated. So much so that she’s even voiced some of her concerns with Cameran.

Cameran has somewhat rejected the traditional role herself. For instance, she wants to keep working because as she said it herself “her husband could leave her or die tomorrow”. So she freely admits to knowing she has to have some kind of independent income just in case.

But Kathryn doesn’t have that. What she has is Thomas. Thomas who wants to raise their daughter on his plantation that’s miles away from the nearest restaurant or other forms of a mother’s release. And Thomas who raised everyone’s hopes/dread when he told them he wanted to make a big announcement then invited Jennifer, his very close friend, to the dinner.

Thus he was making inappropriate comments before he finally got around to announcing his run for senate.

And his friends cheered at the announcement but deep down there were many that thought marrying Kathryn would be better for Thomas than running for senator. On one hand he would make good senator yet on the other he has a rap a sheet. And that rap sheet would make it extremely hard for him to actually get elected.

Then, just to make things even more difficult, Thomas later told Whitney that he can help with his campaign. So now his friends are wondering if he really wants this because if he did then he would never have allowed someone like Whitney anywhere near it.