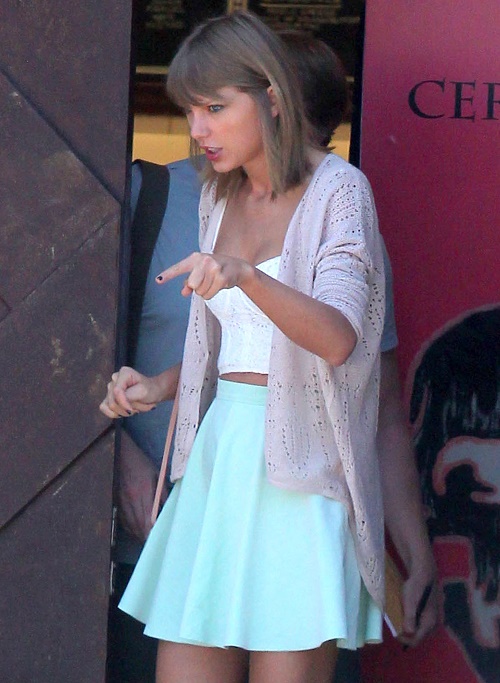 Taylor Swift is not happy with her pal Selena Gomez – and has reportedly gone in to a jealous mean girl rage over Selena’s BFF-Fest on Twitter with Demi Lovato. Taylor Swift might be “America’s Sweetheart” but anyone who isn’t blinded by T-Swift’s good girl persona knows that she is an undercover Regina George, and can be a total bully. Taylor Swift has a herd of hot celebs she refers to as her BFFs, but if they don’t fall in line and let Taylor run the show – she tends to turn on them like a rabid dog.

Last week, America swooned when Demi Lovato and Selena Gomez professed their love for each other on Twitter. That is everyone except for Taylor Swift – who was not happy at the thought of Selena sharing her affection with another singer. Taylor Swift and Selena Gomez have a bizarre relationship. Remember when Selena was hanging out with the Jenner sisters and Taylor cut her off. Or what about the year that Taylor wouldn’t even speak to her because she was dating Justin Bieber? Their friendship resembles a horrible Lifetime movie about fatal attraction. Taylor seems to want Selena all to herself, or not at all.

An insider close to Taylor’s circle of friends dished to CDL, “Taylor wants to be everyone’s BFF, and she freaks out if she is not the most important person in each of her friends’ lives. She won’t ever confront them though, when Taylor is mad at you – you will know. She goes out of her way to exclude you from group hangouts, and usually does something petty like befriending someone you don’t get along with.”

Taylor Swift is literally Regina George 2.0, there is no doubt in our minds that the rumors are true and Taylor is upset about Selena and Demi’s lovefest on Twitter. What do you think Taylor will do to get back at Selena for daring to be friends with someone other than her? Do you believe the rumors that T-Swift is a total mean girl? Let us know what you think I the comments below!

Update: Taylor Swift brought Selena Gomez on stage at the Staples Center last night August 27 in a prearranged promo – along with Justin Timberlake and Lisa Kudrow. Why was Selena included? Certainly not for the musical enrichment of Taylor’s fans?