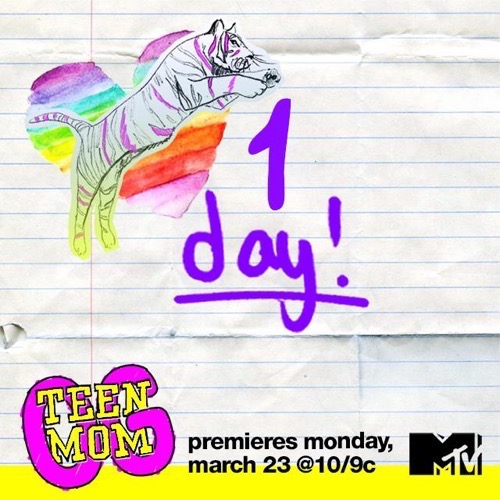 Tonight on MTV their series Teen Mom continues with an all new Monday March 23, season 5 premiere called “We’re Back” and we have your weekly recap below. On tonight’s episode, Cate Lowell and Tyler learn they are pregnant.

For those of you who don’t know, Teen Mom documents their first years of motherhood and places additional emphasis on strained family and romantic relationships.  This years Teen Mom picks up with Amber, Catelynn, Farrah and Maci a few years after the cameras were turned off and finds them at a new stage in their lives as parents.

On tonight’s episode after 6 years Maci Bookout, Amber Portwood, Catelynn Lowell and Farrah Abraham are back and as per the MTV premiere synopsis, “Cate and Tyler learn they are pregnant, spurring Cate to seek marriage; Maci struggles to co-parent.”

It sounds like Teen Mom is going to be an awesome new show. Don’t forget to check CDL for our live recap of Teen Mom premiere at 8PM ET!

On #TeamMomOG, we’re at Catelynn’s house and Tyler reads an article about them wanting a baby. He says they’re stable, own a house and are ready. Tyler says they’re worthy now and can have a kid if they want. They gave Carly up for adoption when she was 16. She says their families didn’t support them but they got engaged and planned their wedding and stuck together. Catelynn says they even went on VH1’s Couple’s Therapy then Tyler called off the wedding but then proposed again.

She says they’re read for the next stage. Catelynn takes a pregnancy test. They watch it and she says it says yes. They’re excited and Tyler just cries. He says he can’t wait to hold the baby. They both say they’re ready. Tyler says he needs to get his degree and she asks if she should be a stay at home. He says at least for the first three years then says once the kid goes to school she can go back to school. He says if they should announce on Twitter but she says it’s too soon.

Catelynn says she’d like to be married before the baby comes and suggest eloping. Tyler says he would never do that. Amber is moving into her own home after getting out of prison. She says she gave up a lot of her old friends that were bad influences. Krystal comes to see her and cries because she says she wasn’t there for her. Amber says she had two kids and is going through a divorce. Krystal says she’s proud of Amber.

Amber talks about having Leah and how she and Gary fell apart. She was charged with domestic assault and substance abuse and was sent to prison for 5 years but only served 17 months thanks to a special rehab program. She doesn’t have custody and says Gary is in a new relationship so it makes things harder. Amber calls Gary and talks to Leah. She asks if she wants to come see her new house and says she’s on the way.

Leah runs out to see her mom and Gary comes out with medicine for an ear infection. He hugs his daughter and loads her in the car. Leah asks if the cameras can see her and her dad says she can. Leah says she has parts in her head. She asks her mom if she can climb a tree but Amber says she’s scared of heights. They get out at the park to play. Amber gives Leah her medicine that night and they get her into her jammies. Amber tucks her in bed and lays down with her.

Maci is in her last year of college and has a weekly radio show. She says her boyfriend Taylor just moved in with them. She says she and Ryan didn’t work out and they split up. She says co-parenting with Ryan isn’t easy. She says when they started dating other people, it got even worse. She says now Ryan is in a serious relationship with his GF Shelby. Bentley fusses when it’s bed time and she says they’re not doing this. He whines and she calls him butthead and says to go to bed.

Bentley says he’s going to fake sleep but she says he’s being mean and needs to go to sleep. Bentley runs in and climbs into their bed. She tucks him in there and Taylor tells him not to drool on his pillow. Maci says Bentley is acting out because of the cameras. Taylor jokes about sleeping on the ninja turtle bed but says if they made it a year and a half long distance, they’ll be okay. She says he still has to meet Ryan.

She asks why kids before marriage. He says they do things opposite. He says society puts too much emphasis on marriage and says good people make good kids, not marriages. Gary comes to Amber’s to pick up Leah. He says it’s a big house for one person. Amber says they don’t fight anymore and he says it’s nice when she doesn’t cut him off and gets mad at him. He says he did a lot when she was in prison. Amber says she just wants them to have a good relationship even though they won’t get back together.

He says you can never say never and Amber says that’s weird. Gary tells Leah they have to go. Shelby is with Bentley and Ryan playing with an RC boat. Maci goes to get a pedicure with her friends Will and Mimi. She says Bentley is in Nashville but didn’t want to go. Mimi says Jen and Larry are so nice and Ryan is a jerk. Maci says Ryan is incapable of putting Bentley first. They encourage her to tell Ryan that he needs to make Bentley a priority. She says she has to tread lightly.

Tyler says there’s an article online saying Catelynn is pregnant then comments calling them trailer trash. He says they should get married first. Catelynn says she should have told her friends not to put things on Facebook. She says she shouldn’t have to worry about it being leaked. Tyler says he wanted to make it a nice story and someone ruined it. Later, Alexa asks about the leak and Catelynn reads the story about them doing a Couple’s Therapy and seeing Farrah on there.

Alexa asks about Farrah not being signed on the show and they talk about how Farrah is gross with all her sex stuff. Catelynn says she wants to get married first but Tyler wants the big wedding so he wants to wait. Alexa says Tyler needs to think about what she wants and Catelynn says he’s so stubborn.

Maci texts Ryan and asks if they can talk today when she picks up Bentley. She gets a call from Ryan who asks what’s up. He says he’s at the lake and wants to know what she wants to talk about. She says she doesn’t want to talk on the phone and he says he doesn’t have time to talk with her but she says it can wait until they have time to talk in person. Ryan tells Shelby he’s about to try and flip his shit. Maci tells Taylor that Ryan doesn’t want to hear anything.

Amber and her friends go to the spa. Over at Gary’s, he and GF Kristina are putting together a bunk bed. He tells her he’s going to go fishing with his brother Robert. He says his brother wants to talk about his GF and she asks if he’ll propose but Gary says no and says they don’t propose around here. She looks quite upset. Amber tells Krystal and Tonya, her mom, that the old Gary is peeking back out. She says she just wants to be friends with him.

Tonya says it’s the same old shit. She calls Gary evil but Amber says he’s the father of her child and took care of her baby while she was in jail. Tonya says she can’t trust him and there is someone better out there for Amber. She gets upset with her mom and says she doesn’t want to talk about this negative stuff and says she’s mean. Krystal cries and them Tonya tells the producer that none of Amber’s friends care unless the cameras are around.

Tyler then says she should her vagina. Catelynn tells Farrah that she’ll be better about herself if she just is honest with herself. Farrah cries and says she was stupider a year ago. Catelynn and Tyler sort of make nice. Later, Tyler tells Catelynn that was tough and Tyler says Farrah at least admitted she regretted it. Amber tells Krystal she just wanted to relax and get her nails done and all that made her want to get high. She says she just needs to see her daughter.

Gary tells Leah to drink her medicine. Amber calls and he says he’s just playing with Leah. She asks her to come over but Gary says they’re leaving on vacation for a week but then he’ll call when they get back. She tells Heather the producer that he’s going on vacation with Kristina and says she’ll always love him but know it will never work out. She says she sounds like a ranting ex and says she thought he’d have more respect.

Shelby tells Bentley they should pull his loose tooth out with a string. Ryan tells him to pull the tooth hard and he tries to pull it out. Bentley says maybe it’s not ready. Maci goes to pick up Bentley and says she’s going to try and talk to his parents about Ryan. He has his tooth out and says it came out brushing his teeth. Maci and Jen talk. She says she’d like to try and get Ryan to communicate with her in person. Jen says it’s pretty impossible and says to try email and start out non-confrontational.

Jen says bring herself down a little and say what can I do better to help us communicate better. Maci says she’ll try it. Catelynn and Tyler are still in LA. She tells him she’d like to be married before the baby comes. He says he wants to do it in real time. Catelynn asks if he’ll freak out again. Tyler says he won’t and says he’s fine now. She asks why he freaked out last time and asks if he wants to marry her. He fakes a face then says yes.

Tyler says they’re going to get married and have a real honeymoon in Scotland. Maci smooches Bentley and he tells Taylor to give him a piggyback ride. He takes him off to bed. He helps Bentley put his tooth under the pillow. He asks how it went and she says she talked to Jen who suggested email. He says it’s not a bad idea and the worst thing is that he would just put it in spam. She says if this doesn’t work she’s done with Ryan. Taylor says as long as she has Bentley she’s not done with that.