The Bold and the Beautiful Spoilers: What’s Next for Maya and Rick – Transgender Wedding on B&B?

BY Stormy Elizabeth on May 31, 2015 | Comments: 2 comments
Related : Soap Opera, Spoiler, Television, The Bold and the Beautiful 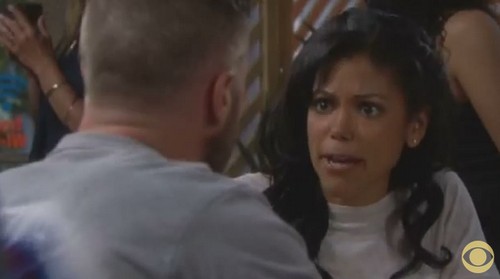 The Bold and the Beautiful Spoilers predict what’s next for Maya and Rick? Even though Maya Avant (Karla Mosley) and Rick Forrester (Jacob Young) are apart for now, both are very present in the other’s thoughts. Rick is telling anyone and everyone that Maya is still the one for him and that her lie wasn’t really that dishonest (oy vey) Rick is pushing the line on that one, but it does seem like he genuinely loves Maya and doesn’t care that she wasn’t born a woman and only opened up when she was caught and had no choice.

So what’s next for the couple? Rick is fighting hard to prove to his dad Eric Forrester (John McCook) that he deserves to stay at the helm of Forrester Creations but Ridge Forrester (Thorsten Kaye) is just as adamant with Eric that Rick should be out and that he should be in charge. Eric really seems to be weighing his options but will end up sticking with Rick much to Ridge’s consternation.

Ridge is pushing hard to say that Rick’s only focus running the company is money and Eric pushes back that Ridge doesn’t seem to have profits enough on his mind. Pushing them together seems like a natural option, but will either of the guys accept this compromise? And, on a personal note, could Caroline Spencer’s (Linsey Godfrey) return further damage Rick and Ridge’s  already awful relationship?

Even in her wheelchair, though, Caroline can make trouble for Maya if she tries to rekindle her romance with Rick. And wouldn’t that just aggravate the stuffing out of Ridge? But I don’t see Rick turning his back on Maya – he has a lot invested in their relationship. I doubt he’ll turn to Caroline, but that doesn’t mean she won’t try. And it could be enough to make Maya suspicious.

But you have to hope that Rick and Maya triumph over all. In a way, Maya is the perfect woman for him. Maya accepts Rick as he is and when he’s ready to run people over or embark on nefarious schemes, she’s happy to be right there by his side. And now that Maya’s proverbial “cat” is out of the bag, there’s nothing to hold her back.

No one can blackmail Maya over her secret anymore and, with Rick at her side, they can really wreak some havoc. They could go after Ridge and anyone else they want. Plus, if “The Bold and the Beautiful” writers press on with this story line, we may see the first ever transgender wedding on B&B!

How great would it be if Rick and Maya tie the knot, adopt a child and go on to happily-ever-after scheming to make everyone else around them unhappily ever after? Even if Rick can’t hold on to his boss chair at Forrester Creations, he and Maya could go start a design house of their own. That would shake things up nicely, wouldn’t it?

What do you think B&B fans, what would you like to see happen with Maya and Rick? Splitsville or a walk down the aisle?

Be sure to check back at CDL often for more “Bold and the Beautiful” spoilers and gossip.