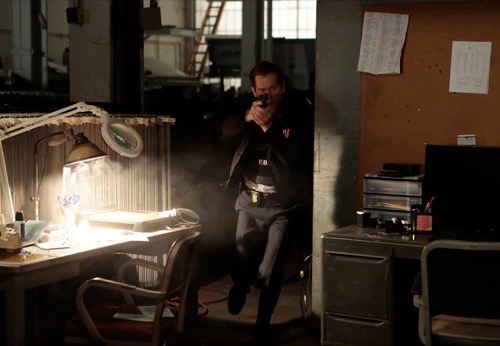 Tonight on FOX their hit psychological thriller, The Following returns with an all new Monday, April 6 season 3 episode 7 called “The Hunt,” and we have your weekly recap below. On tonight’s episode, as Joe Carroll’s execution nears, Ryan [Kevin Bacon] and Mike [Shawn Ashmore] face a new threat, while Max is cleared to rejoin the task force and immediately finds herself in harm’s way.

On the last episode with their latest target on the run, Ryan and Mike follow a tip to a small town to investigated and confirm he isn’t seeking protection. While in town, they both discovered an even larger threat who had managed to avoid suspicion up until now. Meanwhile, Max struggled to make a confession.

On tonight’s episode per say the FOX synopsis, “With only a few days before Joe Carroll’s execution, Ryan and Mike shift their focus to a new threat. Meanwhile, after being approved to start work again, Max rejoins the task force and comes dangerously close to a deadly menace.”

Tune in at 9PM on FOX for another exciting episode of The Following! We’ll be blogging it right here for you so check back in with us. In the meantime, hit up the comments and tell us your thoughts on the second season of the show!

Tonight’s episode of The Following kicks off with two officers transporting their prisoner Duncan to another facility in the middle of the night. They are driving down a dirt road when they lose signal and their car dies. The first officer gets out of the car to investigate under the hood and someone slashes his neck with a knife and murders him. The second officer climbs out of the car and is murdered as well. Straus’s “best student” opens the back of the truck and tells Duncan to come with him.

Ryan is visiting Joe Carroll in prison – he demands to know who Straus’s star pupil was, but Joe won’t give him a name. A guard arrives and informs Joe that he will be executed in seven days and it is up to him to decide whether or not he wants to be electrocuted or lethally injected. Ryan and Mike head to the crime scene on the dirt road to investigate Duncan’s escape.

Ryan and Mike head back to the office, they will be working with US Marshall Scott to bring in Duncan and Straus’s “star student” – who they still don’t have a name for. Nick arrives and says that he is in charge, he says that he didn’t come to fight he has just come to restore order to the office. He taunts Ryan that he might not fit in to the new order. Ryan tells Mike that they are “full steam ahead” on this case no matter what Nick says.

Ryan checks in on Max – she is at the shooting range and trying to shoot her gun, but she keeps doubling over in pain. Ryan tells her that she is supposed to be taking it easy and doing desk work. Mike rushes in and says that they got a break on their passport lead, the last guy to have the passports in his hands was a guy named Luis. Ryan and Mike run out to go track down Luis.

Meanwhile, Luis leaves his friend’s apartment and the elevator isn’t working so he takes the stairs. Duncan and Straus’s student arrive seconds after Luis leaves – his friends tell them that Luis just left and “went to their momma’s house.” Straus’s student uses his machete to chop off one of the guy’s arms and demand to know where Luis went.
Back at the police station Max and Sloan crack the code on the hacker and realize that the FBI’s computer hack came from a company named Manitech. Nick gives Max permission to go to Manitech and do some interviews and try to get to the bottom of it.
Duncan and the student are sitting outside of Luis’s apartment – he tells Duncan that he has to go take care of something. He tells Duncan to follow Luis, and make him take him to the printing press, and then he has to kill him. He warns Duncan not to leave any clues behind – or else he will kill him.

At Manitech, Sloan and Max introduce themselves to the manager, they explain that someone used their network to hack in to the FBI’s mainframe. The Manitech manager is more than willing to help with their investigation and says he will put his “best guys on it.” Straus’s student arrives at the office apparently he works at Manitech and is the one who hacked the FBI.

At Manitech Straus’s student sneaks in to someone’s office named Peter Collins. He plugs a flashdrive in to his office computer and uploads files, and then he slips out undetected. Max runs directly into him in the hallway, she cringes because of her cracked rips and asks him for directions to the bathroom.

Ryan gets an ID on Luis’s girlfriend, and he heads out with Mike and Scott to track him down. At Luis’s girlfriend’s house – they are in bed and hear a noise outside. Luis tells her to stay put and heads downstairs with his gun to investigate. Luis can’t find anything and he heads back upstairs to bed – he finds his girlfriend dead and covered in blood in bed. Duncan hits Luis over the head and knocks him out.

Mike and Ryan arrive at Luis’s girlfriend’s house – they find her dead in her bed right where Duncan left her. Ryan figures out that Duncan didn’t kill Luis because he needs him to destroy evidence from the passports. He tells Mike to get a team over there now so that they can turn the house upside down and figure out where the passport equipment is that they went to destroy.
At Manitech, Sloane gets a lead – she says that Peter Collins accesed the FBI mainframe from his computer two days ago and he also called in sick the day that Strauss was killed. Max arrests Peter Collins and sends him back to the office, she calls Ryan and fills him in on Peter – but he was at work all day so he couldn’t have killed Luis’s girlfriend. After Max hangs up a guy corners her at the office he tells her that Peter Collins is innocent and the reason that he called in sick yesterday was because they were together at a Bed & Breakfast all day. He explains to Max that anyone could have planted those encryption codes on Peter’s computer, and he promises to help her figure out who framed him.

At a warehouse Duncan is destroying all of the passports – all that is left is the printing press. Luis cries to let him go, Duncan prepares to shoot and kill him. Straus’s student calls Duncan and tells him not to kill Luis yet, he has one more job that he needs Luis to do. Meanwhile, Mike gets footage from a street camera and they figure out where the warehouse is that Duncan and Luis are at.

At Manitech, Max and Peter’s boyfriend are two seconds away from figuring out who framed Peter Collins, and the server is disconnected. He heads down in to the basement to reset the server, and Straus’s student is waiting for him. He stabs him and kills him and leaves him lying on the basement floor.

Max heads down to the basement to see what is taking so long and finds the body on the floor – she calls for back up and begins searching the office for the killer. Two police officers barge in she tells them to search the building, the killer is still there.

Ryan and Mike rush in to the warehouse with the swat team and there is a shoot out. The officers manage to arrest Luis without incident, and Ryan chases after Duncan on foot. Ryan catches up to Duncan, and after a struggle – he shoots Duncan twice in the chest. Mike finds a picture at the warehouse and he sends it to Max – she says that it is not Peter Collins, it’s the Manitech manager Tucker.

Meanwhile, Tucker heads home from work and finds Straus’s student Sam sitting in his livingroom with a gun – by the time the cop’s arrive at Tucker’s house, he and Sam are both gone and so is Tucker’s car. Mike heads home to bed and has a dream about playing pool with Joe Caroll.