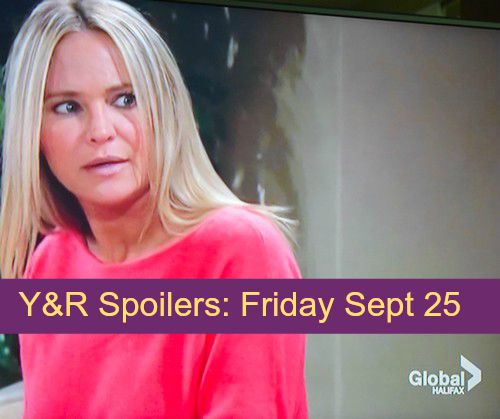 “The Young and the Restless” spoilers for Friday, September 25, promise a shocking episode of confrontation and betrayal – Y&R tease’s that Patty (Stacy Haiduk) will try to get Sharon (Sharon Case) to come around on the idea of being friends. Patty will say she’s sorry for coming on so strong, but she was just really happy to see Sharon. When Patty mentions Sharon’s visitors, Sharon will declare that Patty needs to stay away from her family. Patty will mention miscarrying Jack’s (Peter Bergman) baby and indicate that she doesn’t want to be judged on her past.

Meanwhile, Noah (Robert Adamson) will confront Marisa (Sofia Pernas) about all her lies. Marisa will try to explain, but Noah won’t be interested. Noah and Mariah (Camryn Grimes) will head over to Fairview to see Sharon. After learning about Noah’s relationship woes, Sharon will remind him that sometimes lies are meant to protect the ones you love. Once Noah heads out, Sharon will discuss her miscarriage with Mariah. Patty will eavesdrop nearby as Sharon talks about wishing she’d just come clean about her miscarriage instead of rushing to get pregnant again.

Patty will run into Sharon’s therapist and tell her she overheard Sharon say she’s faking her pregnancy. When Patty returns to Sharon, she’ll say she’s making her baby some booties. Sharon will ask how Patty knows she’s pregnant. Patty will say she heard Sharon talking to Mariah and she’ll wonder when the baby’s due. Sharon will insist that she wants nothing to do with Patty. It looks like Sharon may not be able to keep her secret from Dylan (Steve Burton) for much longer.

Speaking of Dylan, he’ll resume his mission to find Hilary (Mishael Morgan). Kevin (Greg Rikaart) will help out as well. They’ll track down the pilot they believe took Hilary out of Virgin Gorda. Devon (Bryton James) will get updates on what they’ve learned. Later, Dylan will meet with the pilot in the park and suggest that he might have bent the rules. The pilot will deny everything. Devon will show up and demand to know where Hilary is. Things will get heated and Devon will eventually throw a punch.

Thanks to Devon, Neil (Kristoff St. John) will get the news that Gwen (Nadine Nicole) has feelings for him. Neil will head to the lake house to check on Hilary, who is still unconscious. Neil will admit that he cares for Gwen, too. It seems Neil thought revenge would make him happy, but his efforts are robbing him of happiness instead. Neil will get a call from Gwen about making dinner plans, but he’ll make an excuse to avoid seeing her.

Other “Young and the Restless” spoilers reveal that Michael (Christian LeBlanc) and Lauren (Tracey E. Bregman) will go on a date. Lauren will suggest that Michael should move back home and they’ll share a kiss. As their relationship begins to mend, Noah and Marisa’s will deteriorate even further. At The Underground, Marisa will tell Luca (Miles Gaston Villanueva) that she wants a divorce and he’ll agree—with one condition. Luca will demand to know why Marisa left him. Suddenly, Noah will interrupt and order Luca to get out.

Noah will let Marisa know that things are over between them. Marisa will beg Noah to give her another chance. Noah will say that being a nice guy gets him nowhere, but Marisa will insist that she’ll explain everything. Marisa will offer to tell Noah all about Victor (Eric Braeden), Marco (Peter Bergman) and Jack. Will Marisa come clean about the Jack swap and all the consequences that came with it? Y&R rumors hint that Noah is in for quite a shock. Stick with the CBS soap to see what Marisa will spill.