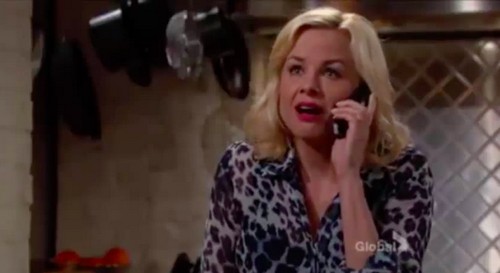 “The Young and the Restless” spoilers for Thursday, June 18, reveal that Avery (Jessica Collins) will call Dylan (Steve Burton) and say she spotted someone on her balcony. They’ll get disconnected and Dylan will tell Sharon (Sharon Case) to call 911. After Dylan leaves, Mariah (Camryn Grimes) will pop in and express concern that Avery wants Dylan back. Sharon will say she’s not worried about Dylan cheating on her. Sharon will add that Dylan has moved in and Mariah will give her a hug.

Avery will inform Dylan that a man in a trench coat was watching her from outside. Paul (Doug Davidson) will arrive and they’ll tell him they suspect Joe (Scott Elrod) was the one lurking around. When Paul doesn’t find any evidence, he’ll urge Avery to call the police first if the man shows up again. Later, Sharon will come over to see what’s up. Avery will say that Dylan left already, but she’ll let the police handle it next time. Sharon will say she’s happy that Avery is safe.

Neil (Kristoff St. John) will drop off Nikki (Melody Thomas Scott) at the athletic club and he’ll say it probably isn’t the best place for her right now. However, Nikki will think it’s a good move. In Victor’s (Eric Braeden) office, Jack’s (Peter Bergman) doppelganger will point Victor’s own gun at him. Victor will say that magazine is empty and tell fake Jack to go ahead. Fake Jack will pull the trigger and laugh when he hears the gun click. Victor and fake Jack will continue to argue until Phyllis (Gina Tognoni) comes in. Phyllis will indicate that she knows Gabriel (Justin Hartley) is fake Jack’s son and she’ll suspect that Victor agreed to share the news in exchange for the merger. Victor will deny it before getting a phone call about Nikki’s arrival in town.

Once Victor departs, Phyllis will demand to know why fake Jack has changed. It seems secrets are coming between them. Fake Jack will explain how much he loves her and he’ll agree to spill the whole story. As they hold each other close, Phyllis will notice fake Jack has a gun on him and he’ll admit that he feels threatened by Victor. Meanwhile, Victor will try to convince Nikki to come home with him. Nikki will refuse and hint that she just can’t stay sober around Victor. Neil will try to smooth things over and get Victor to give Nikki some time. Talk will turn to all the shadiness at the company. Victor will confess that he fears fake Jack will try to kill him.

As Lily (Christel Khalil) drinks at the bar, Joe will join her and order something stronger for the both of them. Lily will tell Joe about her marriage problems with Cane (Daniel Goddard). Neil will see Lily and ask where Cane is. Lily will sarcastically reply that Cane got a room at the club to be closer to Lauren (Tracey E. Bregman). When Joe steps away, Lily will give Neil updates on Cane and Lauren’s kiss. Upstairs in a suite, Paul will stop by at Nikki’s request. Nikki will express regret that she lied for Neil and she’ll say she owes Christine (Laralee Bell) an apology as well.

Other “Young and the Restless” spoilers tease that Dylan will go after Joe to give him a piece of his mind. When Dylan sees him, he’ll make it clear that Joe needs to back off Avery. Mariah will appear and say it would hurt Sharon if Dylan ended up getting arrested. Dylan will insist that hurting Sharon isn’t his intention. Mariah will urge Dylan to stay away from Avery and Joe.

At Avery’s place, Joe will arrive as Sharon is leaving. Sharon will decide to stick around to make sure Avery is OK. Avery will comment on Joe’s trench coat and Sharon will order him to get lost. Y&R rumors say that Avery may be brutally raped in the near future. Will Joe be responsible for this atrocious crime? Stay tuned to the CBS soap to see if Avery’s storyline will take a terrible turn.