The Young and the Restless (Y&R) Spoilers: Victor Threatens to Kill Phyllis While Ian Watches – Nick and Sage Jealousy Erupts 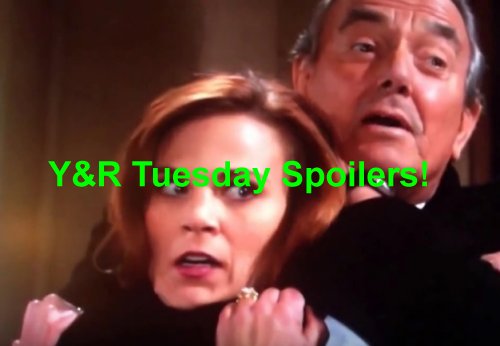 “The Young and the Restless” (Y&R) spoilers for Tuesday, December 1, tease that Victor (Eric Braeden) will press Phyllis (Gina Tognoni) for answers about what she’s up to. Phyllis will give Victor updates on how she got in touch with Ian (Ray Wise).

Ian’s response video will provide his location. Phyllis will want to meet with Ian alone, but Victor will insist on coming along. Meanwhile, Ian will thank Patty (Stacy Haiduk) for helping him. They’ll talk about Phyllis and Ian will suggest that Victor will come with her.

Ian will hand Patty a plane ticket to Paris and a new passport. It’s best if Patty leaves right away. Patty will protest, but Ian won’t want her tangled up in all of this. There’ll be some money waiting for Patty in a Swiss bank account.

Patty will give Ian a peck on the cheek as she leaves. Phyllis and Victor will arrive to see Ian, but he’ll imply that they’re wasting their time. Phyllis will ask Ian to disable the Paragon virus, but he’ll claim that it’s out of his control.

Ian will hint that Adam must’ve left him for dead so he could bring down Victor on his own. Victor will get outraged and demand that Ian stop Paragon immediately. After grabbing a nearby knife, Victor will hold it to Phyllis’ throat and threaten to kill her if Ian doesn’t get rid of the virus.

At the penthouse, Adam (Justin Hartley) will tell Chelsea (Melissa Claire Egan) that everything is going to be fine. Nothing can tear them apart again. Chelsea will indicate that she’s worried about Victor disappointing Adam, but he won’t be concerned.

As long as Adam has Chelsea and Connor (Gunner and Ryder Gadbois) in his life, he’ll be okay. They’ll all bond as they decorate the Christmas tree. At The Underground, Faith (Alyvia Alyn Lind) will say she wants to visit Sharon (Sharon Case) and the baby.

Nick (Joshua Morrow) will want to wait a little longer, but Sage (Kelly Sullivan) will think he should go ahead and take her. They’ll exit and Mariah (Camryn Grimes) will show up to talk about some orders.

When Mariah suggests that Sage may have come back to work too soon, Sage will snap that she should mind her own business. Sage will realize that sounded awfully harsh and she’ll apologize.

Other “Young and the Restless” spoilers reveal that Nick will open up to Dr. Anderson (Elizabeth Bogush) while Faith meets the baby. Nick will confess that he’s feeling jealous about Dylan (Steve Burton) and Sharon welcoming their little one.

Dylan will come out and chat with Nick alone. Nick will let Dylan know that he thinks he’ll be a good father. Later, Sharon will give Dr. Anderson the news that she intends on going home today.

Dr. Anderson will go get the release papers so they can get the process started. Back at The Underground, Faith will excitedly describe meeting “Sully.” Faith will want to spend more time with Dylan and Sharon, which will set Sage off.

Sage will insist that Nick needs Faith right now. When Sage states that Faith is being selfish, Nick will intervene. Sage will say she’s sorry, but Faith will ask to leave with Mariah. Sage will admit she was upset because Faith seemed to be picking Sharon’s family over theirs.

It looks like Sage still has some issues to sort out. Stick with Y&R to see if Nick can help Sage cope. So Y&R fans, what do you think about these “Young and the Restless” spoilers?