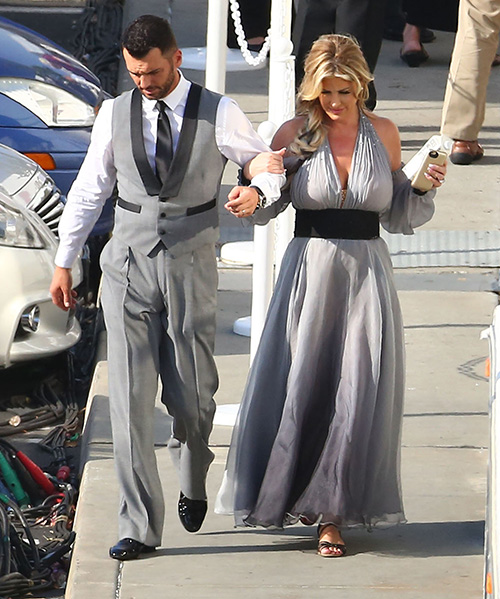 Dancing With The Stars ex-partners Tony Dovolani and Kim Zolciak have some serious bad blood between them. As you all know, the Real Housewife of Atlanta suffered a stroke after Week 2 of Season 21 – and because she and Tony didn’t perform in the next live show, they were automatically eliminated per DWTS rules, regardless of what the reason was behind their absence was. Kim Zolciak was furious she was eliminated, and even encouraged fans to sign a petition begging the DWTS judges to let her return to the show.

No one seems to be taking into consideration how Tony Dovolani feels about his elimination so early in the competition – it turns out the pro dancer is not a happy camper. And, in an interesting turn of events, he actually blames Kim for their elimination! In a recent interview with Star Magazine about his early elimination in Season 21 of Dancing With The Stars, Tony threw some major shade at his former partner Kim.

Tony ranted to the magazine, “Dancing with the Stars isn’t something you just blink at. Let [Kim’s stroke] be a warning. So for future celebrity contestants out there, get on a treadmill, starting working out before you come here, and get checked out by a good doctor, especially if you aren’t used to that sort of physical activity.”

It’s pretty clear that Tony didn’t think Kim Zolciak was in the best of shape, nor was she even close to prepared to compete on the intense dancing competition. Of course, Kim’s medical crisis could have just been a fluke accident and may have happened to someone in tip-top shape, we’ll never really know. Regardless, we can see why Tony would be frustrated by being eliminated so early on in the competition because of something completely out of his control.

DO you agree with Tony Dovolani? Or do you think that he crossed a line by dissing Kim Zolciak for having a stroke? Let us know what you think in the comments below!