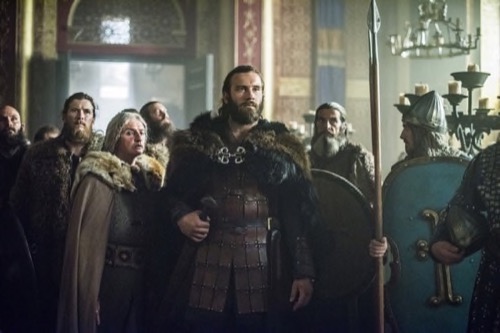 Tonight on the History Channel Vikings returns with an all new Thursday, April 23 season 3 finale called “The Dead” and we have your weekly recap below. On tonight’s episode, the Vikings, in the Season 3 finale, Viking troops make one more daring effort to take Paris, and Ragnar [Travis Fimmel] requests a favor of Bjorn. [Alexander Ludwig]

On the last episode, the Vikings launched an all-out second assault on Paris, and Emperor Charles was forced to make a desperate move. In Wessex, Judith was faced with her own pivotal decision. Did you watch last week’s episode? If you missed the episode we have a full and detailed recap, right here for you.

On tonight’s episode as per say the History Channel synopsis “in the Season 3 finale, Viking troops make one more daring effort to take Paris, and Ragnar requests a favor of Bjorn, one that could alter the course of Viking history.”

Tonight’s episode looks like it is going to be great and you won’t want to miss it, so be sure to tune in for our live coverage of The History Channel “Vikings” at 10:00 PM EST! While you wait for our recap hit the comments and let us know how excited you are for the season 3 finale of Vikings tonight.

Tonight’s episode of Vikings kicks off on the beaches at Paris, the French soldiers arrive and inform Bjorn and Lagartha that they have brought all of the treasure they promised – the Emperor expects them to keep up their end of the deal and leave immediately. The French leave and Ragnar’s men begin digging through the chest of treasure and cheering. Meanwhile, inside a tent Ragnar is lying in bed shaking and coughing, he doesn’t look good. Rollo visits him and informs him that they have brought the payment that they promised. Ragnar says it doesn’t matter to him because he is dying, but at least he will get to see Athelstan again.

Rollo leaves the tent and talks to Floki – Floki says that the priest poisoned Ragnar’s mind. Lagartha doesn’t believe that Ragnar is really baptized. Rollo explains that their Gods didn’t protect his mind form the priest because he has taken Athelstan’s side.

Meanwhile in Paris the Emperor and his daughter head to the Church to pray with other members of the city. Count Odo tries to talk to Princess GIsla after prayer but she gives him the cold shoulder. The Emperor boasts to the people that it is a beautiful day because they are safe, his daughter Gisla sneers that all he did was pay off the Vikings, and more people will be back to try and get in to their city.

Later that night at the beach the Vikings are celebrating the treasure they received. Floki finds Helga sitting off by herself and tries to talk to her – she tells him she has no forgiveness for him and doesn’t want to understand and then she storms off. In his tent Ragnar is talking to Bjorn, he warns him that he will soon be responsible for their people. Ragnar warns him that when the time comes he must lead with his head and not his heart. And, then he tells Bjorn he has a job for him that only he can do.

At the palace Count Odo has a woman in his chambers, he pours her a drink. The woman scoffs that Princess Gisla is boring and moral, and won’t even speak to Odo. The Count reassures her that Princess GIsla will speak to him eventually – the Emperor will make her. Count Odo takes the woman by her hand and takes her down a dark chamber in to a room in the basement – he lights torches and the creepy room looks like some sort of torture chamber. He tells the woman that if she lets him chain her up and whip her, he will let her choose which whip he uses on her. She lets Count Odo chain her up and take off her clothes and he begins whipping her.

The next morning Helga finds Floki on the beach tinkering around with some tools – he says that Ragnar has asked him to build one last boat for him. The French soldiers arrive at the beach and demands to know why they haven’t left yet since they were already paid. Bjorn explains to Count Odo that his father Ragnar is very sick and too weak to travel. The Count demands to see if Ragnar is really sick – Bjorn takes him in to Ragnar’s tent. Bjorn informs the Count that Ragnar has asked for one thing, he wants a proper Christian burial and they are not leaving the beach until he promises to do so. Count Odo agrees that Bjorn can bring his body to the Cathedral with unarmed men after he dies and they will say a Christian mass for him.

The next morning, Bjorn emerges from Ragnar’s tent – where there is a coffin inside shaped like a boat. It looks like Ragnar has died, he tells all of the men lined up outside of Ragnar’s tent that they can go talk to him now. Lagartha heads in to the tent first where the coffin is lying on a fur rug and surrounded by candles. She crouches on the floor and whispers to the closed coffin that she doesn’t know what the Gods have in store for Ragnar – but she believes they will save him from the Christians. Afterwards Rollo files in and says his peace, followed by the other men. FLoki rants to Ragnar’s coffin that he betrayed him and his heritage and chose the Christian Athelstan over him.

The next day Ragnar’s men carry his casket to Paris, the Priest opens the doors for them and leads them through the city and to the chapel where Count Odo, Princess GIsla, and the Emperor are waiting for the funeral. Inside the chapel the Priests begin the funeral and prayer. Ragnar jumps out of the coffin – very much alive, and slits the priests’ neck. He takes Princess GIsla hostage and uses her as a shield to get back to the doors to the city. Ragnar opens the door and Bjorn is waiting outside with all of the men. Ragnar turns around to kill Princess GIsla, thinks for a moment, and then lets her go free, she rushes to safety. The Vikings storm through the doors that Ragnar opened them and in to the unsuspecting city of Paris. Ragnar stumbles out of the city gates and his son Bjorn catches him.

Inside the chapel the Emperor is sitting on the floor crying to GIsla and Count Odo about how the Vikings violated their city, the Princess orders her father to get up and tells him the heathens have left. Back on the beach Lagartha is shouting at Bjorn, she demands to know why Bjorn didn’t tell her that Ragnar was alive. Bjorn tells reminds her that Ragnar is still king and that was what he wanted and because of his plan they got even more spoils from their raid on the city of Paris. They plan to raid Paris again in the Spring and they need to leave some men on the beach – Rollo volunteers, Ragnar and Bjorn and the rest of the Vikings ship off for home. At the Palace that night the Emperor reveals to Princess GIsla that he has offered her as a wife to Rollo to bribe him to leave the beach and go home and not raid their city again. Princess Gisla cries that her father is only doing this because she won’t marry Count Odo – the Emperor scoffs that she has to obey him not as her father but as the Emperor.

The French soldiers visit Rollo on the beach and offer him Gisla and the title of Duke, in return Rollo has to help the French defend Paris against Ragnar when he returns. Rollo agrees to the terms and heads to the castle, the emperor greets him and Princess GIsla stands up and sneers that she will not marry the “filthy Pagan animal.” Rollo is unfazed by her and laughs and says “Hello” in French to the Emperor. Meanwhile, on the boat back home everyone is sleeping. Ragnar whispers to Floki and calls him over to him. Floki kneels down next to Ragnar and he whispers to him that he knows he killed Athelstan.