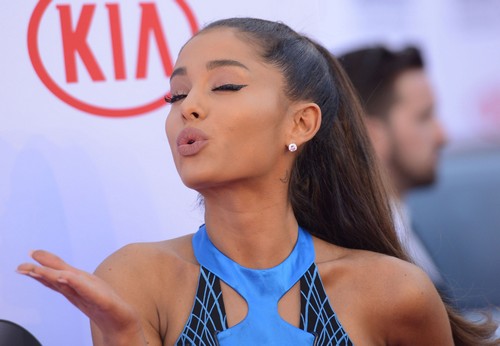 Poor Ricky Alvarez, Ariana Grande is just not that “Into You.” Ariana Grande has officially broken off a year-long relationship with dancer Ricky Alvarez according to a recent article in US Weekly, amidst online rumors that the “Dangerous Woman” has her sights set on Justin Bieber.

Despite telling Billboard Magazine in a May 2016 interview that she was “very happy” with Alvarez, Ariana Grande fans suspected not all was well in her love life following the singer’s recent tweets about changes in her life and the mysterious deletion of all Ricky Alvarez photos from her Instagram account.

The couple went very public with their romance in July 2015 in a now infamous donut-licking surveillance tape that was released online in which the couple locked lips before tongue-violating several pastries.

Ariana Grande has “Bang Banged” her way through several celebrity and quasi-celebrity boy toys over the past few years, including rapper Big Sean and British crumpet Nathan Sykes. Rumors of a Justin Bieber connection have been swirling for some time now, but the rumor gained street cred due to a recent Teen Vogue article which linked the two.

Like many secret relationships before them, Instagram seems to have been their downfall when Justin Bieber reposted a picture of Pikachu that was taken from Grande’s own Instagram account. The connection was enough to start the hashtag #JelenaWillNeverRiseParty trending on Twitter while fans anxiously waited for either celeb to confirm or deny a blooming romance.

Let’s all hope that Bieber refrains from adding an image of Pikachu to his Mike Tyson-esque list of facial tattoos.

Relationship woes aren’t Ariana Grande’s only problems. The singer has had a rough couple of months following reports of diva behavior, low concert ticket sales and being booted from this week’s Democratic National Convention due to her anti-America remarks captured on the aforementioned donut tape.

With rumors of an impending Justin Bieber hookup, the singer can now add Selena Gomez and faithful Jelena fans to her list of 99 problems. Jariantor fans however, are practically salivating at the thought of seeing the two canoodle on the red carpet at the upcoming MTV Video Music Awards, in which both are nominated to bring home coveted spaceman trophies.

However, the declining diva has been known to fake celebrity hookups in order to gain buzz so Jariantor fans may end up just as disappointed as Grande’s concert promotors.

What do you think about the Ricky Alvarez and Ariana Grande split? Is the Ariana Grande and Justin Bieber connection legit or just another one of her faked celebrity hookups? Will the alleged couple go public at the MTV Video Music Awards? How will Selena Gomez react to the news? Sound off in the comments below!