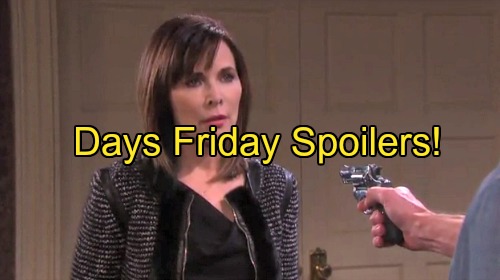 Days of Our Lives (DOOL) spoilers for Friday, September 16, tease that Clyde (James Read) will taunt Kate (Lauren Koslow) while holding her at gunpoint. He’ll insist that Kate messed with the wrong man. Kate dumped Clyde because she couldn’t handle his huge ego, but he’ll indicate that it was grave mistake.

Clyde likes to be in total control at all times. Whether it’s a business deal or a relationship, Clyde wants to run the show. Kate’s nasty comments didn’t go over well when she broke it off. Clyde prefers to be the dumper, not the dumpee. Days of Our Lives spoilers suggest that Clyde will plan on showing Kate the error of her ways.

Meanwhile, Chad (Billy Flynn) will realize that Clyde has backed Kate into a corner. He decided to check on Kate after her phone call and it’s a good thing he did! Chad will try to step in and save Kate from this hillbilly hoodlum. He just has to figure out how to do it without getting them both killed. Clyde is armed and dangerous!

Chad will manage to get them out this jam, but another one awaits. Days spoilers say Clyde, Orpheus (George DelHoyo) and Xander (Paul Telfer) will meet up for continued scheming. Salem hasn’t seen anything yet. The villains will set up a home base so they can plot in peace.

DOOL viewers should expect some thrilling moments throughout the rest of their revenge mission. Nicole (Arianne Zucker) will certainly be worried about what’s in store. Days of Our Lives spoilers reveal that Theresa (Jen Lilley) will offer Nicole a warning. She’ll state that Nicole could become Xander’s next target.

Nicole will fear Xander’s imminent attack. Deimos (Vincent Irizarry) could probably handle Xander, but who knows if he’ll be around when the time comes? Xander will obviously wait for the right opportunity to strike. Stick with Days to see if Nicole will eventually find herself in a fierce faceoff.

Across town, Steve (Stephen Nichols) will pay Kayla (Mary Beth Evans) a visit. She’s still recovering from her surgery in the hospital, but she’ll be headed home before long. However, Steve will undoubtedly want Kayla to stay put during the fugitive mayhem. He’ll be concerned about Orpheus coming after her.

Steve is just being protective, but Kayla will think it seems controlling. She won’t appreciate Steve ordering her around, but a little advice from John (Drake Hogestyn) and Marlena (Deidre Hall) will help shift her view. Kayla and Steve’s reunion will be back on track soon. Days of Our Lives spoilers say Kayla will agree to let Steve move home.

The conflict will start to subside for “Stayla,” but that doesn’t mean the drama is over. Next week, DOOL fans will see Kayla and Joey (James Lastovic) stuck in a hostage situation. Steve will do his best to play the hero. We’ll give you updates as more news emerges. Stay tuned and don’t forget to check CDL often for the latest Days of Our Lives spoilers, updates and news.

Can Xander’s rage be explained? Visit the #DAYS Tumblr for a refresher on his past: https://t.co/oiBE7GSChs pic.twitter.com/OUrzm4HzOY