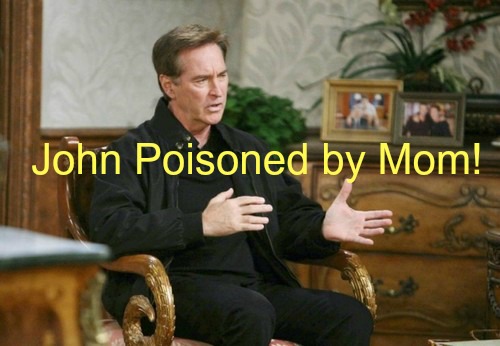 “Days of Our Lives” spoilers reveal that John (Drake Hogestyn) will finally have a chance to meet his mother, Maude (Eve Brenner). Eduardo (A Martinez) told the organization that John just wanted details on his past and they provided this new information. However, Eduardo and John agreed that they should proceed with caution. This organization clearly can’t be trusted.

Nevertheless, John is desperate to find out more about his history and he won’t be able to resist setting up a meeting with his mom. DOOL spoilers say Maude will explain that John was being raised on a farm until his father died. Maude couldn’t provide for John on her own, but a wealthy couple living nearby decided to adopt him.

Unfortunately, tragedy struck and John’s adoptive parents were killed in a car crash. The couple’s relatives were anxious to get their hands on the money, but that couldn’t happen if John inherited everything. With that in mind, the adoption was nullified and John was sent to an orphanage. That’s where John was adopted by the Alamains, a family that was involved in a previous version of John’s past.

“Days of Our Lives” spoilers indicate that John will believe Maude’s side of the story and he’ll give Marlena (Deidre Hall) updates on the big news. John will be glad to have some answers about who he is and where he came from. Later, John will make a return trip to see his mother. He’ll want to tell Maude just how grateful he is.

When they sit down for a cup of tea, “Days” spoilers say John will appear to pass out after drinking his drugged beverage. A formidable man named Vadim (Joseph Kamal) will emerge and insist that Maude needs to take care of this mess. Suddenly, John will pull out a gun and let Vadim know he was faking.

It seems you have to get up pretty early in the morning to fool John. Imagine, his own Mom in on poisoning her son! He’ll state that he smelled the poison and declined to partake. John will knock out this mysterious thug and head on his way. When he reports back to Eduardo, they’ll realize John is in more danger than ever.

DOOL viewers will want to stay tuned for all of the action ahead. Stick with “Days of Our Lives” to see if John can keep himself and his family protected.

So “Days” fans, what do you think about John’s perilous predicament? Can John remain safe when the organization still wants him dead? Will John manage to stay one step ahead of them? Voice your opinion in the comments below and don’t forget to check CDL often for the latest “Days of Our Lives” spoilers, updates and news.