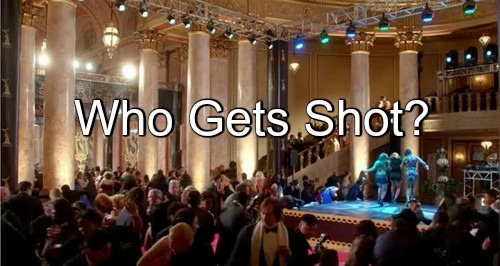 Empire spoilers for Season 2 Episode 17 “Rise by Sin” airing Wednesday, May 11, show us that it’s the night of the big ASA awards. Cookie Lyon (Taraji P Henson) is looking glam in gold and Lucious Lyon (Terrence Howard) wants to be her date.

We have to wonder if Lucious’ tux will be a little tight after all the cake he was forced to eat at knife-point by his crazy mama Leah Walker (Leslie Uggams). On the red carpet, Cookie says they’re not the Brady Bunch or even the Jacksons – to say the least.

Did Carol Hardaway (Tasha Smith) notice the FBI shield that Tariq Cousins (Morocco Omari) had on him or was she too busy checking out how fine he is? Tariq approaches Cookie who says she knows he’s a Fed and he asks what she’s hiding.

Tariq overheard Carol talking to Candace (Vivica A Fox) about Carol helping Lucious with murderous tasks, so will Tariq spill the secrets Carol has been keeping from her before she can come clean to her sister? How long until Carol falls off the wagon with a thud?

Carol and Cookie bicker over a sexy dress Carol wants to wear to the ASAs and Cookie tells her she looks like a hooker. Carol tells Cookie she’s got a date with Tariq and Cookie worries about that what Tariq “the freak” Fed wants from poor clueless Carol.

Cookie tells Jamal Lyon (Jussie Smollett) the truth about what happened to Freda Gatz’s (Bre-Z) father Frank Gathers (Chris Rock) – that Lucious had him killed in jail. Jamal warns Freda about his shady family and then Lucious and Jamal get into it in the studio.

Lucious chokes out Jamal and is close to hitting his son then tells him he’s “nothing but a disappointment to him.” Cookie warns Jamal that the Feds are after the family but Jamal wisely knows it’s only his dad they’re after – and he doesn’t care if Lucius goes down.

Hakeem Lyon (Bryshere Gray) tries to make room in his life and career for fiancée Laura Calleros (Jamilia Velazquez) but Tiana Brown (Serayah) proves to be a constant temptation. Crazy old Leah tells Andre Lyon (Trai Byers) that she knows the whole family is performing at the ASAs.

Leah complains that she was not invited and tells Andre she’s never even seen her son onstage. Andre says maybe she can go. She says Lucious wishes she was dead and says she just wants to see her grandbabies onstage and promises not to spill Lucious’ big secret.

The ASAs will erupt into chaos and Empire spoilers say “one Lyon will fall.” Is there a death coming? A serious injury? Which Lyon is at risk? We know that a sacrifice is made on behalf of Lucious – but who would stick their neck out for their vindictive patriarch?

Gunshots ring out at the ASAs and people flee. Is it Freda coming for the man who had her dad killed? Or has Leah snapped and she’s just as dangerous as Lucious says? Did she sneak a gun in tucked in her old lady purse? What will happen?

Be sure to tune into CDL Wednesday May 11 for a live recap of Empire Season 2 Episode 17 “Rise By Sin.” and all you Empire news, recaps and spoilers!