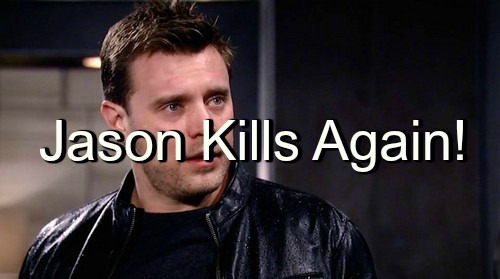 “General Hospital” (GH) spoilers reveal that on this week’s episodes Jason Morgan (Billy Miller) will worry more about his violent tendencies and propensity to kill first and ask questions later. It’s all about Jason’s upcoming business trip to the Keys.

This banking trip seems awfully contrived as a way to get Jason out of Port Chuck. So what’s going to happen? You might think it’s a throw away to score Billy Miller some much-needed vacation time except for a spoiler about Sam Morgan (Kelly Monaco).

We know Sam will have a nightmare and it’s certain to be about Jason’s life being at risk. The thing is, when it comes to violent conflict involving Jason, it’s rarely his life at risk (unless you sneak up behind him and shoot him – as his enemies figured out).

GH spoilers tease that Jason will encounter an enemy while taking care of his banking business. But which enemy is it coming for him? General Hospital could invent an enemy we don’t know about that Jason encountered while working for Helena Cassadine (Constance Towers).

We’ve got fingers crossed it will a former enemy back for more. The nominees are…

After all, it was Cesar that shot Jason and tipped him into the harbor. Once he finds out Jason is still breathing, he won’t be happy. Cesar’s appearances are always enjoyable. Plus, Anna Devane (Finola Hughes) is single now, so he’s got another reason to show up.

Most of the Alcazars have been wiped out but there were hints that Lorenzo might have survived and his death was faked. Lila Rae Alcazar lives on plus GH showrunners could always resurrect and old or create a new Alcazar. Lots of options there.

Jason killed Mateo’s twin Manny Ruiz. Remember, Mateo is a priest and former criminal with violent tendencies of his. Perhaps losing his twin was too much for him and he’s out to avenge him. Plus, LaSardo plays a great villain – would be good to see him back.

We’re wondering if Finn might play into the revenge storyline. Finn supposedly is out for revenge and Jason has an enemy coming to town for revenge. Finn could be associated with any former enemy or one we’ve never heard of for a fresh plot.

The bottom line is, no matter what enemy comes for Jason, it looks like the Big Bad him (or herself) won’t be revealed at the time of the attack. General Hospital spoilers know that it’s far more likely that the uncloaking of Jason’s enemy won’t occur until May sweeps.

Jason will dispatch the minions sent after him with extreme prejudice. The problem is, killing off all the attackers means you get no info about who sent them. After he kills them, though, Jason will have a crisis of conscience.

He doesn’t want to kill people but it’s like his body and instincts are trained for murderous violence and he’s on a hair trigger. He almost killed Nikolas Cassadine (Tyler Christopher) the other day when they brawled at Wyndemere.

Once Jason gets caught up in a confrontation, his Stone Cold side take over and he goes into assassin auto-pilot. GH spoilers say that Jason will wonder if he can control it and how to get this demon out of him. Even though it’s kept people safe, Jason doesn’t want to be a killer.

Problem is, if Jason pursues a solution to quell his inner rage monster, will his loved ones be at risk when his enemy comes calling? Since Kevin Collins (Jon Lindström) is back, maybe he can use hypnosis to put the demon back in its box.

But that might turn out to be an even worse option…

What do you think GH fans? Is Jason right to hate the part of him that kills without thinking? Is he a danger to the society of Port Charles? Share your comments below on who you think might be coming after Jason and check back with CDL often for more “General Hospital” spoilers and news.