General Hospital (GH) Spoilers: Lulu Learns She Has a Child At Helena’s Will Reading – Stavros Embryo or Baby Revealed? 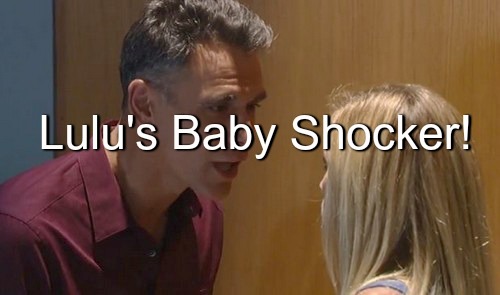 “General Hospital” (GH) spoilers indicate that shockers are in store at the reading of Helena Cassadine’s (Constance Towers) last will and testament. But now that Lulu Spencer (Emme Rylan) revealed that she was invited – we have to wonder why. Does this have something to do with her Stavros embryo?

For those newer to GH, Lulu was kidnapped by Stavros Cassadine (Robert Kelker-Kelly) who was obsessed with her. Weirdly, Stavros is Nikolas Cassadine’s (Tyler Christopher) father who forced Lulu’s mom Laura Spencer (Genie Francis) to be with him and bear his child back in the day. Ick…

Stavros later became obsessed with the daughter of his unwilling baby mama and when Stavros held Lulu, he took one of her eggs and fertilized it with his sperm to create an embryo that was last held by Helena. The initial notion was that it went up in flames at Crichton-Clark along with Stavros himself.

But there are always fake fiery deaths on GH so Stavros may or may not be dead – and all indications are that Helena saved the embryo. So did Helena then hire a surrogate to carry Lulu and Stavros’ child? The last we heard of the embryo was quite a while ago so that embryo could be a full-fledged kid by now.

If GH stuck to the timeline, Lulu’s kid could be no older than three since that was when the embryo was made. However, there was embryo conversation after that, so it may have been still un-implanted as of 2014. So the kid could be as young as a newborn.

Also, we have to remember that GH likes to play with time when it suits them, so the kid could be any age really. The bottom line is, Lulu could find out at the reading of Helena’s will that she has a child she does not know about, sired by Stavros.

Helena could leave a trinket to Lulu for her involuntary egg “donation” – or the fact of the child could simply be revealed. There are GH rumors that surprises and an unexpected guest will turn up at the reading of the will.

Could a Lulu-Stavros offspring be part of the surprise? We also know that Laura Spencer (Genie Francis) will soon embark on an adventure that springs from this will reading. Could she be looking for her grandchild that came from this embryo?

While we don’t know for certain what will come at the will reveal, you have to agree that it seems out of left field that Lulu was invited along for the ride. Laura’s invitation makes some sense, at least, since she is the mother of Nikolas, the presumed Cassadine heir.

But why Lulu? Is it because she unknowingly spawned another Cassadine and Helena is using this event to unveil the shocking truth? What do you think GH fans? Why was Lulu invited to the reading of the will? Do you think her embryo/possible child with Stavros is the reason?

Share your thoughts below and come back to CDL often for more “General Hospital” spoilers and news.