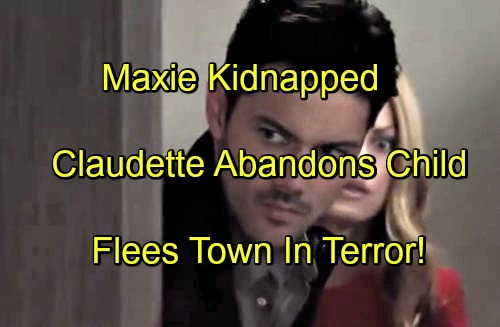 New General Hospital (GH) spoilers indicate that Maxie Jones (Kirsten Storms) will fight her attacker, but it won’t go well. Even after Maxie clarifies she’s not Claudette Bolland (Bree Williamson), she’s not released! The henchman takes Maxie and stashes her away instead.

That makes sense because Maxie would go blab and warn Claudette. Valentin Cassadine’s (James Stuart) henchmen can’t risk letting her loose so she’s hidden away to be dealt with later. When Maxie doesn’t turn back up at home, Claudette and Nathan West (Ryan Paevey) go check out Claudette’s room.

When they find Claudette’s hotel room ransacked and a hint that Maxie was there, that’s too much for the crafty Canadian minx who decides to hightail it out of Port Charles before she’s harmed. But the cold-hearted cheater stunningly abandons her daughter when she bolts. 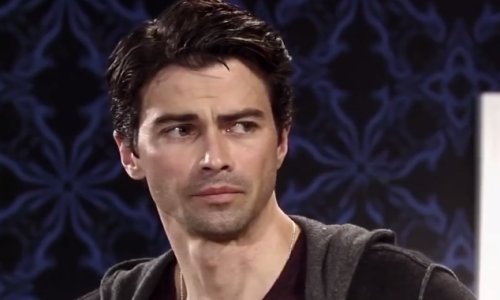 Griffin Munro (Matt Cohen) has Charlotte Munro (Scarlett Fernandez) with him since he thinks that’s his daughter – the jury is still out on that. They spend time with Anna Devane (Finola Hughes) who is pleased that Griffin has more family in Port Charles.

Griffin is shocked when he finds out Claudette ditched their kid and ran. As awful as it seems, Claudette’s rapid exit is really to protect her daughter from Valentin. Claudette hopes that Valentin will assume both she and the kid ran and he’ll leave Port Charles and her daughter will be safe.

Claudette has not spilled the whole truth of her sordid past with Valentin and more of it will be confessed soon and Nathan and Griffin will find out just how low Claudette sunk after her relationships with both of them ended. It’s pretty wild stuff that will put Claudette in a worse light. 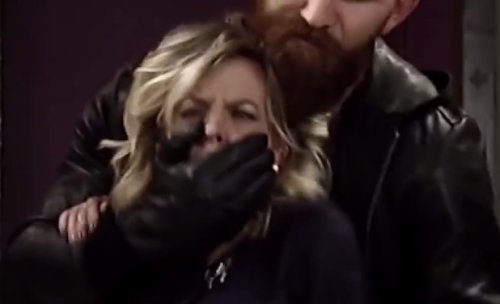 Griffin and Anna look into Valentin’s laundry list of crimes and decide that Claudette was indeed in danger and her leaving Port Charles was wise and General Hospital spoilers indicate that Griffin worries him dumping her made her vulnerable to the guy. That’s his Catholic guilt consuming him.

This may soften Griffin’s heart and lead to him taking a different approach to Claudette, but is it too late for her? Valentin is back, pursues Claudette and wants to punish her for some of what she’s done to him. GH spoilers tease Claudette’s habit of doing men dirty hit Nathan, Griffin and Valentin!

Maxie is determined to save herself and when her kidnapper leaves her alone to go about other henchman duties, she races to get herself out of what’s obviously a deadly and desperate situation. Maxie is a clever girl, so she may rescue herself rather than waiting on her man to save her.

Maxie tries to get to the truth…@teenystweeting @GeneralHospital #GH

General Hospital spoilers reveal that James Stuart is already back on the ABC soap set filming and we can expect to see him in coming weeks with the return of big bad Valentin and this time, the Cassadine Casanova is sticking around for a while.

What do you think GH fans? Is Claudette wrong to ditch Charlotte and run? Is she still lying about who Charlotte’s father is? Will Maxie get herself out of the mistaken identity mess or will it be Nathan who saves her?

Share your comments below and be sure to check back with CDL often for all the latest General Hospital spoilers and news.