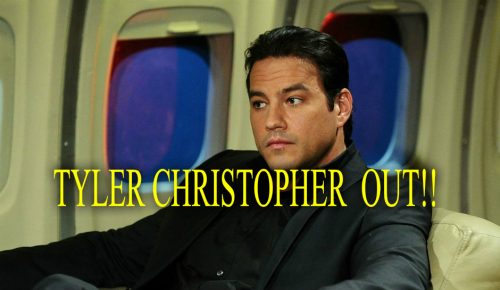 Hot new General Hospital (GH) spoilers reveal that contract talks between GH and Nikolas Cassadine portrayer Tyler Christopher have tanked and he is NOT coming back to General Hospital. Soap Opera Digest confirmed this shocker today.

What does that mean? The good news is that everyone in Port Chuck already thinks that Nikolas is dead, so they can either leave him dead, recast him now, or recast later if TPTB at General Hospital decide to bring him back.

But does that also mean the return to Cassadine Island is off that Lulu Spencer (Emme Rylan) and Dante Falconeri (Dominic Zamprogna) were planning? Will we ever see Valentin Cassadine (James Stuart) again now that Nikolas looks to be dead for real?

Is that whole chunk of story about to be abandoned? Will Laura Spencer (Genie Francis) abandon her quest for answers about Helena Cassadine’s (Constance Towers) bequest? Then there’s the Jake Webber (Hudson West) angle on the island story.

Jake was supposed to tell Franco (Roger Howarth) about the woman (Daphne) and kid (Athena) he spent time with there. Looks like we may never get closure on Jake’s kidnapping without the island plot.

This is stunning and the third in a series of renewal talks that has shaken up fans. Rebecca Herbst (i.e. Elizabeth Webber) almost left the show and Franco portrayer Roger Howarth reportedly got raked over the renewal coals too and now we’re losing a major veteran of the show.

The actor hinted at the end of July that he would be back shooting soon and then apparently things turned badly with negotations between the actor and the ABC network. This is a big blow to fans particularly on top of losing Teresa Castillo when Sabrina Santiago is killed off this week.

This is a real let-down because Nicolas touched so many active plots. Perhaps the network knew this was coming, though, and that’s why they shipped Spencer Cassadine (Nicolas Bechtel) off to boarding school to tie up loose ends for Nikolas.

It’s time to close down the shutters at Wyndemere, roll up the carpets, and throw covers on the furniture. The last legitimate Cassadine has left Port Charles and it’s a sad that we’ve lost this family that has been part of epic storylines since the 80s.

What do you think GH fans? Are you crushed that Nikolas isn’t coming back to Port Charles? Will you miss Tyler Christopher? Share your comments below and check back with CDL often for all the latest General Hosptial spoilers and news.