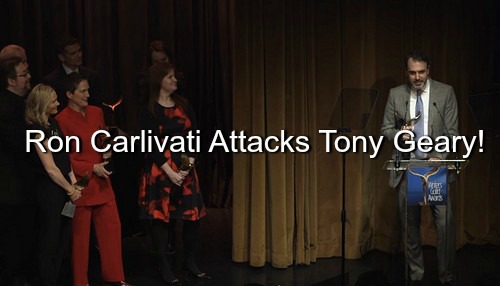 “General Hospital” (GH) spoilers indicate that the showrunners at the ABC soap may have been hasty when they pushed Ron Carlivati out the door last year because he brought home the Writers Guild of America award for best writing in Daytime Drama.

What made it even better is that Ron was snippy as he accepted the prize. An experienced soap writer knows how to bring the drama – and boy did Carlivati deliver. He declined to take ABC to task for his ousting – even though he had to share the stage with one of his replacements, Jean Passanante.

Carlivati may have left the network alone (he may, in fact, still be under a gag order tied to his severance package) but decided to go after Anthony Geary instead. And you have to admit that Geary may have had some karmic payback coming for the mud he slung at Carlivati last year.

After Geary’s retirement from GH last year, he did a very revealing interview with TV Insider that seemed to intentionally burn bridges – specifically those leading to the writer’s room. Although Geary declined to mention Carlivati by name, he made it very clear he was talking about the head scribe.

Geary said at the time, “I think the problems were always more with the writer than with Frank, although the writer and I have never spoken… We’ve sat at the same table at the Emmys and what not, but he never has anything to say to me.”

Geary iced the cake by answering when asked if he would ever come back to GH for a visit that a deciding factor would be “Who will be writing?” That interview was published July 2015 – so the revenge that Carlivati served on Geary at the WGA Awards was ice cold.

When Carlivati took the stage, he admitted that he thought “The Bold and The Beautiful” would win for their transgender storyline but then read from a written statement to make his acceptance speech which centered on Geary’s comments in that interview last summer.

Because his speech was in writing, there is no doubt that the former GH head writer intended to slap back at Geary – this was no off the cuff remark – it was thought out and pre-planned. Carlivati said, “We told an origin story about one of the most popular characters on daytime television.” Nice so far…

Then Carlivati added, “At the time the actor who played him told me it was his favorite story line of his entire thirty-seven-year run on the show.” That alone conflicts with Geary’s assertions that they never spoke and that he was not a fan of Carlivati’s writing.

But then Carlivati went for the jugular explaining, “Shortly after this, however, he became disenchanted with my writing – and for some strange reason refused to acknowledge that we’d ever even met referring to me in interviews only as ‘the writer’.” That’s Carlivati calling Geary a flat our liar…

Then Carlivati smirked, “Apparently this is supposed to be some kind of insult but I’m sure my fellow writers standing on the stage and probably most of you in this room would agree, I consider being called a writer to be a badge of honor. So thank you to him for that, and thank you to the writer’s guild for this.”

Obviously Carlivati had months to stew on what he perceives as insults and lies by Geary in that interview. Carlivati was axed in July and WGA nominations were due in October so you have to wonder if ABC submitted the nomination or Carlivati himself did – either could have.

But either way, Carlivati had to be gleeful to hear that he won and could deliver the coup de grace in his feud with Geary. It was also masterful to NOT name Geary in the speech just as Geary chose to NOT name Carlivati in his snarky interview.

No doubt that was the acceptance speech heard round the world – and you have to also wonder how long it took Geary to hear the news all the way over in Amsterdam where he’s taken up residence since retiring from General Hospital.

What do you think GH fans? Was Geary rude to call out Carlivati in his exit interview? Was Carlivati justified in calling out Geary in his WGA acceptance speech? Who do you think is telling the truth – and who threw the best shade – Carlivati or Geary?