Pitbull Honored With Hollywood Walk Of Fame Star: Dedicates His Star To The Latino Community (PHOTOS) 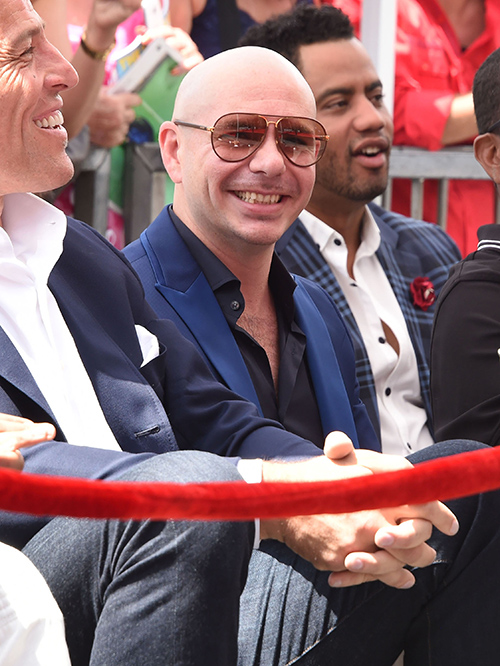 Pitbull finally gets inducted into the Hollywood Walk of Fame after being a key player in the music industry for over a decade. The “Timber” rapper dedicates his star to all the Latinos who came to the U.S. with big dreams and worked hard to get there.

According to E! Online, the unveiling of Pitbull’s star on the Walk of Fame was a frantic affair that attracted not only the rapper’s fans but also his close friends in celebration of his achievement. The event was attended by Lil John, Tony Robbins, and record label owner Luther Campbell.

Not only was Pitbull acknowledged for his remarkable contribution to the music industry, 70 million single sales, and 9 billion YouTube views, but also how he fought his way through to become that the sensation that we know him to be today.

Tony Robbins, a motivational speaker, honored Armando Christian Perez, Pitbull’s real name, for being an extraordinary musician and one of its kind in Miami’s little Havana. He also said, “In a community that is stressed, in a community where often the most respected people sell drugs, his life could’ve been completely different. In fact, should’ve been based on the law of averages. He’s a man where somewhere inside he’s got so much love for people that he couldn’t hurt anyone.”

Just recently, Pitbull partnered with Visit Florida, the state tourism marketing corporation, and released a music video “Sexy Beaches,” which promotes the tree lined beach side of Florida to boost tourism. In this 4-minute video clip on YouTube, viewers will be able to see Florida’s stunning beaches and state-of-the-art hotels.

On Friday, this Cuban musician was awarded a star at the famous Hollywood Walk of Fame and in the following ceremony, he praised the hard work that Latinos do to live and survive in United States. He also said that people don’t know the real struggle Latinos experience. Pitbull thanked all the Latinos who work really hard in this country to build a better future.

The artist said in his acceptance speech, “We really appreciate the opportunity the United States represents, to be free, to get ahead.”

Pitbull is known by many other names such as “Mr. Worldwide” and “Mr. 305.” He is all set to launch his new album, “Climate Change,” later this year and has already sold as many as 6 million copies of his albums throughout his career. Pitbull’s star, awarded by Hollywood Chamber of Commerce, will be the 2,584th star on the Hollywood Walk of Fame.

Not only did Pitbull earn a star for his commendable music career, but was also presented with a striking shoe, enclosed in a Lucite box, by Leron Gubler, president of Hollywood Chamber of Commerce. This came as a gift from the late singer, Celia Cruz, and her estate.