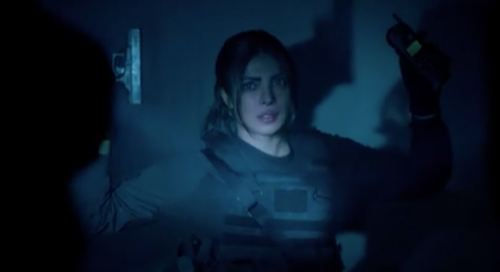 Tonight on ABC their hit drama Quantico airs with an all-new Sunday, October 30, 2016, season 2 episode 5 and we have your Quantico recap below. On tonight’s Quantico, Season 2 episode 5 in the future, Alex (Priyanka Chopra) is cornered by the terrorists.

Did you watch the last Quantico episode where the trainees were put through a training drill that tested their stress levels while Alex (Priyanka Chopra) tried to gather information and get close to Owen? If you missed it we have a full and detailed Quantico recap, right here for you.

On tonight’s episode as per the ABC synopsis, “At the Farm, Harry is still suspicious of Alex and Ryan, and he’s determined to learn more about their plan, while Leon is recruited for a special assignment by Owen. Meanwhile, in the future, Alex continues to run from the terrorists but faces her toughest challenge yet when the terrorists corner her.”

Tonight’s episode of Quantico kicks off with a flashback to the CIA training camp, Harry is hooking up with a guy named Will, who apparently is linked to the FBI and knows Shelby. Harry snatches Will’s phone and blocks Shelby so that Will can’t get any calls or texts from her.

Meanwhile, Shelby heads to a coffee shop near the CIA camp, she has a chance encounter with Leon and he flirts with her. When Nimah finds out she is floored and tells Shelby that she can’t see Leon again.

Back at the camp, Ryan and Alex are searching Leigh’s room to find proof that she bugged them and is listening in on everyone’s conversations. Harry catches them in the act, luckily they didn’t find anything in Leigh’s room.

Out of nowhere someone jumps Alex, Harry, and Ryan and stabs them in the necks with syringes. The three of them wake up in a classroom with Owen, they’re in bed with each other and naked. Apparently, this is their next lesson at the CIA farm, what to do when your enemy drugs you 101.

Present Time – Miranda and the FBI are still stationed outside of the terrorist attack building. Miranda takes Shelby aside and tells her they need a hacker to find out why the terrorists brought in Eric Boyer. Miranda wants Will Olsen, she tells Shelby to contact him and set up a meeting.

Flashback – Owen has a new assignment for the CIA trainees. There’s a reporter named Crawford that is holed up at a hotel, he is suspected of sharing secrets with the Russians. They have to go undercover at a socialist party in DC and case the reporter’s hotel room.

Present – Shelby secretly meets with Will behind Miranda’s back. She tells him about the email she got from Boyer saying that Miranda was one of the bad guys. She asks Will to help her get to the bottom of it and find out if Miranda is working with the terrorists.

Alex is still running around the terrorist site rogue – slowly picking off the terrorists one by one. She manages to get her hands on one of their cell phones.

Flashback – Harry Doyle is on to Alex and Ryan. He texts Shelby the address to the party they are going under cover to that night, and it’s from Will’s phone. Shelby is freaking out, she thinks that Alex and Ryan have been compromised. She heads to the party and runs in to Leon. Meanwhile, Harry tries to catch Shelby talking to Alex and Ryan so that he can prove that they are still working with the FBI.

It’s “Go Time,” Alex, Ryan, and Harry head up to Crawford’s hotel room. When they arrive, they realized that they have been duped by Owen again, there’s what looks like a dead body lying on the bed. The phone rings, it’s Owen, he tells them they have 13 minutes to clean up the room and get rid of all traces of their DNA before the police arrive. If they fail this mission, they shouldn’t even both coming back to the training camp.

Harry agrees to help Alex and Ryan clean up the suite – on one condition, he wants to know the truth about what they are doing at the farm. Ryan tells Harry that he is FBI, but Alex is not. Henry slips downstairs to get Owen’s keycard to help them make it look it was his room. While Henry is away, Alex and Ryan play him – they put the room in Harry’s name instead, so the police bust him with the dead body. It looks like they beat Harry at his own game.

Present – Alex shuts down the lights in the building. The terrorists manage to finally capture her at gunpoint. Just as a man is about to shoot and kill Alex, his partner kills him. Alex is shocked – the woman that saved her is wearing a mask and won’t tell her who she is. She gives Alex a gun and tells her to go, she takes Alex’s bracelet to prove to the other terrorists that Alex is dead.

Flashback – Owen has Alex over for tea once they get back to the training camp. He’s impressed that she and Ryan made it out of the hotel room and had the nerve to frame Harry with the body. Back at the students’ house, Leigh corners Ryan in the kitchen and makes small talk. She confesses that she misses her kids and her husband. Ryan gives her a pep-talk and reassures her that she is doing just fine at the training camp.

Harry returns and he is not a happy camper. He says that the rule was no one gets kicked out if they reveal that they are CIA to get out of trouble with the police – and he didn’t use his get out of jail free card, so technically he is still in the program. Harry demands answers from Alex and Ryan…he wants the truth.

Ryan and Alex go out to drinks with Alex at the bar so that they can talk in private. Harry reveals that he is a member of MI6, he’s apparently part of a program where an American trains with MI6 in England and he trains with the Americans. Ryan and Alex tell him that they can’t tell him anything about their mission until they talk to their superiors. He tells them to get on the phone and call them then – because no one is leaving the bar until they have this all straightened out.

Meanwhile, Shelby sneaks off and heads back to the diner and secretly meets up with Leon again.

Present – Miranda gets a phone call from Will. He looked at Eric boyer’s emails like Shelby asked him to. Will tells Miranda that he knows what she is doing, and he supports her and he wants to help, he scoffs that he convinced Shelby Miranda is innocent too, even though she isn’t.

Alex is roaming the halls again, sneaking around the terrorists, and she bumps in to a familiar face…Lydia.