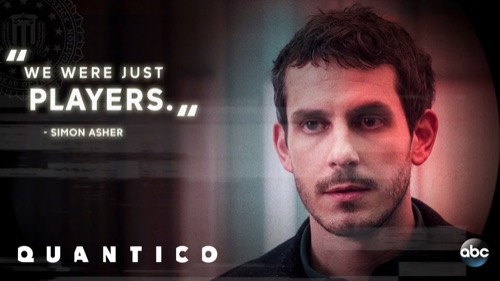 Tonight on ABC Quantico airs with an all new Sunday May 8, season 1 episode 21 called, “Closure” and we have your weekly recap below. On tonight’s episode on career day at Quantico, as graduation nears, the NATS prepare to leave Quantico for their real-world assignments.

On the last episode, Alex and Ryan found themselves working together when the NATS visited various FBI field offices. Did you watch the last episode? If you missed it we have a full and detailed recap, right here for you.

On tonight’s episode as per the ABC synopsis, “as graduation nears, the NATS prepare to leave Quantico for their real-world assignments. Meanwhile, in the future, Alex discovers that a Quantico colleague isn’t who they appeared to be; and finds herself in the midst of another possible attack.”

Tonight’s season 1 episode 21 looks like it is going to be awesome so make sure that you tune in to our live coverage of Quantico at 10:00 PM EST!

Tonight’s episode of Quantico kicks off where we left off last week – Alex is driving around Ryan’s truck with the nuclear bomb in it. The FBI office is in mayhem, Ryan explains to Miranda that he caught Alex uploading something to his computer and she stole his truck. They pull security footage from the parking ramp and confirm that the truck has a bomb in it. Miranda makes Ryan surrender his gun and says that he is a person of interest too.

Flashback to Quantico – Liam gives Alex her father’s badge. He tells her that her father would be proud of her, she’s at the top of her class. He will be honored to work with her in the field some day. Alex is being stationed in New York, and Ryan is going to DC. He tells her that they will only be three hours apart.

Shelby gets another letter from her parents – she freaks out on Caleb and tells him to stop writing the fake letters. Obviously, Caleb is baffled, he actually didn’t write this letter. Afterwards, Shelby meets with Caleb’s father, to discuss having her parents captured.

In class, each of the students are assigned a terrorist attack to study. They meet with agents that worked on the cases, to discuss how they captured the terrorists. Alex requests to work on the Omaha bombing since it was her father’s case – Liam says that’s not allowed, they can’t work cases they have a personal connection to.

Present – Alex is still driving around in Ryan’s truck with the bomb, and talking to Drew/The Voice on the phone. He tells her not to try anything – the whole truck is rigged. If she opens the truck door or rolls down the window, the bomb will be detonated.

Miranda has everyone searching for Ryan’s truck. Shelby shows up at the FBI office with Senator Hass, they have a recording of Will talking to Alex on the phone and instructing her to drive the truck. Hass demands that she releases Caleb, they need him and Shelby to help them stop the bomber. They are going to have to release Ryan and Rayna too.

Flashback to Quantico – Shelby is trying to get her parents to come out of hiding so that she can set them up. She lies to her mother on the phone and tells her that she is working on an immunity deal for her. Shelby and Alex switch cases so that Alex can snoop around her dad’s old case, and Shelby can snoop around the 9/11 files that her parents were involved in.

Alex is reading her father’s journals – he turned a log book in every week that he was under cover. She notices that one of the logbooks are missing. She asks the agent that was on the case with her dad and he tells her not to worry about it.

Present time – Miranda and Senator Hass are trying to keep the bomb quiet. But, a video is leaked on the news of Alex leaving the parking garage with a bomb in the truck. The city is about to launch into mass paranoia.

Hass holds a press conference and says that she is suspending her campaign to help the FBI with the bomb. Meanwhile, Miranda tells Ryan to watch the floor and says that she is heading upstairs to a briefing. Ryan is suspicious, because he notices that the elevator went downstairs instead of up.
Flashback to Quantico – Alex can’t drop the missing log book. Finally, her father’s former partner reveals that he burned it after the Omaha bombing. He explains to Alex that her father was undercover – he actually helped the militia that did the bombing in Omaha get blueprints to the building. He didn’t want her father to be remembered like that.

Present – Rayna and Caleb manage to track down an address to the phone that is calling Alex, Ryan rushes to the address. Meanwhile, Drew and Simon wake up in a room – handcuffed together. Drew isn’t the terrorist, somehow the terrorist is using Drew’s voice to talk to Alex. Drew and Simon start struggling to get free. But, there is a trip wire on the door – if someone opens the door, a bomb will be detonated an they will be dead.

Flashback to Quantico – Shelby is getting herself in to trouble. She stole files from the 9/11 case to pretend that it is an immunity deal for her parents. Caleb meets up with Shelby’s mom, he tells her that Shelby is setting her up, if she really loves her daughter – then she needs to turn herself in before Shelby has her arrested, and ruins her career in the process.

Present – The Voice has made Alex pull over the truck in the middle of the street. She is being surrounded by cops. Ryan arrives at the apartment where Drew and Simon are tied together. Simon and Drew get untied, and Simon makes it out of the fire escape. Ryan kicks in the door, while Drew is still inside, and the bomb goes off. Ryan is okay – the SWAT team announces that whoever was inside the room is dead.

Simon finds Alex’s truck parked outside. Meanwhile, Ryan calls Alex on her cell phone. Alex is freaking out, she heard the explosion, and the line went dead. Now, the Voice isn’t giving her any more instructions.

Flashback to Quantico – Shelby gets to the hotel and her mother is gone. Her plan to capture her parents is ruined. She freaks out on Alex, she can’t believe that she and Caleb ruined her plan. She tells her that she wishes that she never met her. There are two weeks until everyone leaves for their first assignments. Alex tells Ryan that she thinks they should run away for those two weeks and get to know each other.

Present time – Simon talks to Alex through the car window. She refuses to unlock the door. He tells her that the bomb team has swept the entire truck, and the bomb is not detonated. The Voice was playing her again, there is no bomb. He tries to tell her that Drew wasn’t The Voice – it was all another game.

Tonight’s episode of Quantico ends with Senator Hass and Alex holding a press conference – the bomb was detonated and the terrorist threat is over, they reassure the city that they are safe. Meanwhile at the FBI office, the bomb that they just took out of the truck is missing. Simon, Rayna, and Shelby realize that Miranda is missing too – they are certain she is the terrorist.

Meanwhile, Miranda is two steps ahead of them. She has already figured out who the real terrorist is. She breaks in to somebody’s office, and finds computer monitors set up in all of the Quantico students houses. The terrorist walks in and shoots Miranda… it’s Liam. While she is gasping for air, Miranda asks him why he is doing this. Liam nonchalantly responds, “ to make things right.”