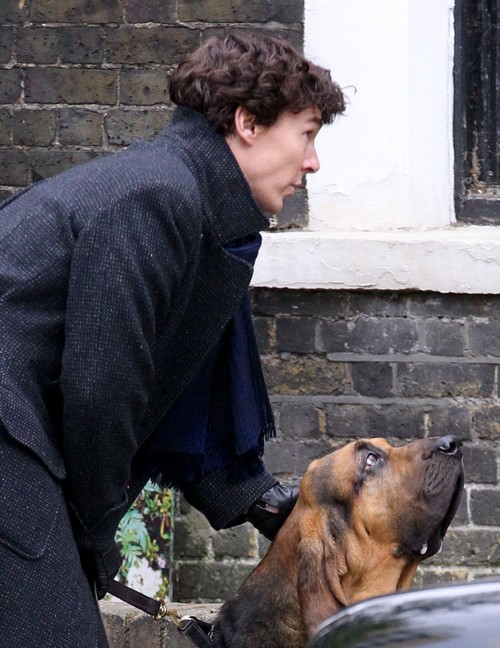 Sherlock spoilers for Season 4 (or Series 4 or if you’re an Anglophile) is filming but we’ll have to wait a while longer to see our favorite detective. In the meantime, here are some spoilers from the set. Sherlock Holmes (Benedict Cumberbatch) has a bloodhound at his side and we wonder what they’re sniffing out.

Season 4 will have just three episodes and showrunner Steven Moffat says, “Ghosts of the past are rising in the lives of Sherlock Holmes and John Watson and terror and tragedy are looming. This is the story we’ve been telling from the beginning and it’s about to reach its climax.”

Perhaps Sherlock has a four legged companion because Dr John Watson (Martin Freeman) and wife Mary (Amanda Abbington) are prepping to become first-time parents. Freeman was also spotted on set and his character Watson was sporting a baby Bjorn with a fake baby tucked inside.

The air date for Sherlock Season 4 was teased as 2017 but Moffat then said they may air on the BBC as early as Christmas 2016. We also know that in addition to the now-hitched Watsons and Sherlock, Molly Hooper (Louise Brealey) is back as is Anderson (Jonathan Aris).

Moffat has also promised a major cliffhanger that will leave viewers “desperate” for Season 5. Let’s hope it’s not as nail biting as Sherlock’s death plunge at the end of Season 2. Other teasers for Season 4 is that Jabez Wilson from Arthur Conan Doyle’s “The Red Headed League” will feature prominently.

And for any Sherlock fans hoping to see more of Jim Moriarty (Andrew Scott), Moffat has made assurances that Sherlock’s former nemesis is well and truly dead and did not survive the bullet to the face. Good to know!

Also of import is that Martin Freeman has hinted that Dr Watson will be a widower before all is said and done. Given Mary Watson’s dodgy and dangerous past, it would be sad (but not entirely surprising) if she’s taken out in some epic manner in Sherlock Season 4.

On Mary’s future, BBC’s Sherlock co-creator Moffat said, “John’s got a wife and Sherlock likes her and isn’t it adorable and it all goes to hell.” Also, Season 4 will introduce a new character known simply as “Passenger” played by James Holmes.

Not that if you Google the actor, he’s not the Aurora theater shooter Holmes – be sure to add “UK” or “actor” to the search or you get tragic results… Holmes is a famous UK actor that few US viewers will recognize at a glance, but the funny man is best known in England for the series “Miranda.”

What do you think Sherlock fans? Are you giddy that Season 4 is shooting and it’s a little more than seven months until a prospective Christmas air date? What do you think about Mary’s possible demise? Will that leave Sherlock and John set up as an oddball family unit with the baby?

Share your comments below on your hopes for Sherlock Season 4 and check back with CDL for more Sherlock spoilers as shooting progresses.