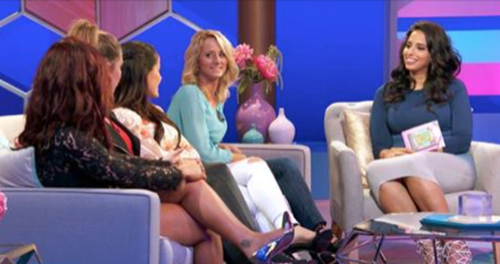 Tonight on MTV their series Teen Mom 2 continues with an all new Monday May 16, season 7 episode 9 called “While You Were Out” and we have your weekly recap below. On tonight’s episode, Barbara and David face off over Jenelle.

On the last episode, Leah and Corey squared off in court over custody of the twins; Jenelle agreed to let Nathan see Kaiser; and Kail struggled to help Isaac, who missed Javi. Did you watch the last episode? If you missed it, we have a full and detailed recap right here for you.

On tonight’s episode as per the MTV synopsis, “Barbara and David face off over Jenelle; Aubree gets a new accessory; Kailyn and Javi struggle with his deployment; and Leah receives troubling news about custody.”

On this weeks episode of Teen Mom 2 Chelsea and Cole are working on their new house. She is out in the garage helping him work on a project. Chelsea talks to Cole and tells him that Aubree is having trouble seeing things in class. She tells him that she is going to make her an eye appointment.

Janelle is having lunch with David. She tells him “I wanted to get Jace tonight, but my mom asked me if I could get him on Saturday. I told her no because I didn’t get to see him last weekend.” David says “Your mom is ridiculous. She is trying to keep you from your son. You need to get custody.” Janelle says “If we get custody of Jace I swear we are going to move away.” Janelle asks David if he has heard from Nathan. David says “No. He hasn’t sent any pictures of anything that he has for Kaiser.” David and Janelle continue to talk and she tells him “We’ll sort the whole Kaiser custody thing out later.” David laughs and says “It’s amazing that he wants to sue you for custody.” Janelle tells him “I am just waiting for him to file the papers and if he does he will be in a for a fight like he has never seen.”

Kailyn is dealing with raising Lincoln and Isaac while Javi is away on deployment. Javi calls his friend to talk to him about what’s happening. His friend asks him how things are going and Javi tells him “It sucks over here. I wake up in the middle of the night checking to see if Kail or anyone else has texted me and I can’t go back to sleep. Then I have to wake up and shower to get ready for work.” His friend asks how Kailyn is doing and Javi tells him “Her load has doubled since I left so I am going to tex Gigi and Peach to pick up a bottle of wine and some flowers and go check on her. I want her to know that I appreciate everything she is doing.”

Chelsea and Cole are getting ready for the concert. They head off with their friends to the Jason Aldean show and Chelsea is excited because they have backstage passes so they get to meet him. The group takes pictures with the country singer and they have a blast at the concert.

Janelle is spending time with Kaiser and waiting to hear back from Barb as to whether or not she can have Jace for the weekend. Barb asks Jace “What do you do when you’re at Mommy’s house?” Jace tells her “We don’t do anything. We sit around and watch TV all day.” Barb asks him “Don’t you go out walking or to the park or anything?” Jace tells her “No not anymore. Mommy sleeps all day.” Then Barb asks “Well where’s David?” Jace tells her “He comes out of the room sometimes.”

Kailyn is happy that Javi is paying for her and her friends to go out. She decides to bake some cookies to send him. Her friend asks her “How is it being here by yourself all the time?” Kailyn says “I don’t have time to be lonely. I hear Isaac crying at night and it’s like he is talking to Javi.” The cookies don’t turn out well. All of them head out and Kailyn sees all of the flowers that Javi has sent for the whole group. He writes Kailyn a beautiful note thanking her for all of the things she is doing to hold their family together while he is away.

Leah is at Gracie’s cheer practice. When practice is over Ali starts to cry because she can’t cheer like her sister. When Leah gets home she finds a letter in her mailbox letting her know that she is not recognized as the joint custodian of the girls. She says “I should’ve known it wasn’t over.” She looks very upset.

Chelsea and Aubree go to the eye doctor to get Aubree’s eyes checked. Chelsea reads a text message from Cole. She tells her “Cole says don’t be scared or nervous. It’s gonna be all right.” The Dr. comes in and begins to examine her. The Dr. tells her that they are going to dialate Aubree’s eyes and the little girl gets very nervous. She doesn’t want them to put the drops in her eyes. When the Dr. goes to do it Aubree starts to cry and becomes very upset. The Dr. gets Chelsea to try and get the drops in her eyes but Aubree continues to kick and scream.

Janelle is very upset. When Barb comes to pick Jace up he is outside with David’s daughter Maryssa. Barb is very upset and calls out to Janelle. David comes out of the bedroom and tells her “Janelle doesn’t want to talk to you.” Barb gets angry and continues to scream at David. She tells him “I’m not the one with the pending charges.” David asks her “What charges?” She responds “You have domestic abuse charges pending.” David laughs and tells her “You better check again.” Barb gets even louder and David tells her “Either stop yelling in front of my kids or leave my house.” Barb tells him “You just live here. Janelle pays the bills.” The argument continues until David calls the police. Jace comes out the door with his cousin. Barb puts them in the car and then tells them “You won’t be coming back here anymore.” The police wait until she drives away to leave.

Leah is upset and confused about he papers she received from Corey’s lawyer. Corey is talking to his dad about the issue of primary custody. Corey says “Leah and I have been trying to work this out for six years and for six years it hasn’t worked.” His dad says “There is always some type of turmoil. when the girls live with her.” Corey says “I hope she doesn’t do anything stupid so she doesn’t end up in jail.”

Javi calls Kailyn the morning after his arranged outing for her and her friends. Javi is really down and he tells her “It is really hard to be here and do the same thing over and over again.” Kailyn asks him “What can I do to help you or make it better?” He tells her “There is nothing anyone can do. I don’t have anything here. I have my room but I go to sleep to get up and go to work.” Javi starts to cry and become really emotional. Lincoln and Isaac come over and Kailyn tells them to say hi to Daddy. They both say hi and Isaac tells him “I miss you.” Javi repeats the sentiment and Kailyn tells him “Keep your head up and remember why you did this. It will all be over sooner rather than later and you’ll be home.” They end the call.

Chelsea and Aubree are finally finished with the eye doctor and they are waiting for the results. Chelsea tells Aubree “The next time you are afraid of something like that you can’t scream and kick me.” The Dr. comes in and sends Aubree out to go look in the toy chest while she talks to Chelsea. She tells her “Aubree needs glasses and we want to check her again in three months.” Chelsea is very emotional, but she pulls it together and helps Aubree pick out a really cute pair of glasses.

Leah is upset and she talks to her friend. She tells her “Corey had his lawyers file these papers in response to what my lawyer wrote up and he’s contesting joint guardianship.” Her friend says “I thought you two worked this out.” Leah nods and says “We even talked and agreed that joint guardianship was what was best. Now he goes and pulls this.” Her ftiend says “Why not just drop everything you guys have just done and go back to court and let them settle it?” Leah says “That’s what we’ll have to do. He has become this family man and now he thinks he is the better parent and deserves primary custody of my girls. I should have primary custody because I do everything for them.” Her friend nods and says “Corey is really hurting the girls.”