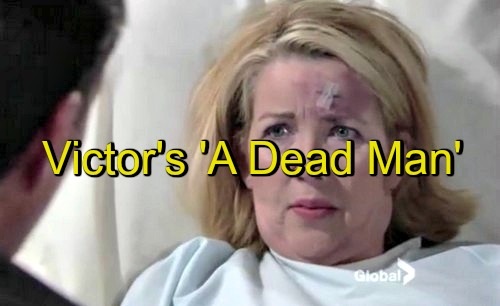 “The Young and the Restless” (Y&R) spoilers for next week’s episode, Monday, April 11, tease that Victor’s (Eric Braeden) situation will continue to take a toll on Nikki (Melody Thomas Scott). Victor drives Nikki up the wall, but she still loves him deep down.

After relaying her fears to Nick (Joshua Morrow) and Victoria (Amelia Heinle), Nikki will head to the athletic club and down a drink.

Nikki will spot Sage (Kelly Sullivan) and suggest that she could use her wealth to get her another child. Sage will be offended and shout that a baby isn’t an accessory. Nikki will be disheartened by the confrontation. Nothing seems to be going her way.

Later, Jack (Peter Bergman) will find Nikki at the hospital. He’ll learn she got drunk and walked in front of a car. Nikki will just have some minor injuries from the hit, but the ordeal will worry Jack. Nikki will beg Jack to keep her secret. She won’t want her family to know how much she’s struggling.

Other “Young and the Restless” spoilers say Victor will ask Ian (Ray Wise) about the prison warden. Ian will insist that the warden has good intentions, but he can’t keep an eye on all the inmates 24 hours a day. Ian will open up to Victor about the concept of family. He’ll admit he’s jealous of Victor’s clan.

Victor will sit alone in his cell and reflect on happy memories with Nikki. When the lights suddenly go out, a booming voice will announce that Victor is a dead mean. Meanwhile, Dylan (Steve Burton) will meet with Adam (Justin Hartley) at Crimson Lights.

Adam will give Dylan updates on his conversation with Victor. He’ll believe Ian is a real threat.

Dylan will reply that the other inmates could be targeting Victor as well. It’s obviously quite dangerous for Victor in the state pen. Adam will be concerned about what he might do if Victor gets killed. He could take things too far.

Y&R spoilers say that Dylan will appreciate Adam’s honesty and he’ll agree to help him out if possible. Afterwards, Dylan will call the warden and declare that Victor needs to be protected from Ian.

Adam will also share some sweet moments with Sage. When she stops by the penthouse looking for Chelsea (Melissa Claire Egan), Sage will confide in Adam. He’ll urge Sage to take plenty of time to grieve. She’s experienced so much loss.

Sage will be grateful for Adam’s friendship and how he always understands. Adam will have a flashback of when he said he mourned Christian on his own.

Sage will head over to Sharon’s (Sharon Case) house to visit the baby. Nick will show up and ask if Sage is OK. She’ll indicate that she feels better after spending time with Sully. Of course, Y&R viewers know Sage is actually cuddling with her own son. Will the secret finally be exposed soon?

Stick with the CBS soap to see when the news will get out.