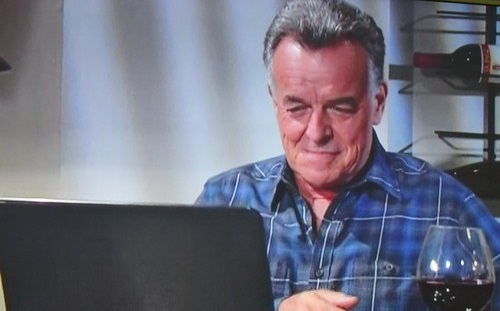 “The Young and the Restless” spoilers tease that Ian (Ray Wise) will finally cross the line. Ian has been pushing Adam’s (Justin Hartley) buttons since they first formed their partnership. Adam is trying to make sure Ian plays by the rules, but things haven’t been working out as well as he’d hoped. Ian does what he wants and it doesn’t matter if Adam approves. That’s just what Adam gets for pulling a guy like Ian out of prison to help take down Victor (Eric Braeden). Somewhat reminiscent of what happened when The Moustache got Marco out of prison to take down Jack – we all saw how well that worked out for everyone.

Adam desperately wants revenge on his father. In fact, Adam wants vengeance so much that he’s risking Chelsea (Melissa Claire Egan), Connor (Michael and Nolan Webb) and the life he’s currently rebuilding with them. However, Adam apparently didn’t think this plan through. Ian recently tried to sabotage Chelsea’s fashion line, but Adam forced him to back off. Ian shifted his attention to reigniting the Newman and Abbott feud as fans saw this week, but Adam wasn’t pleased with that idea either.

What did Adam expect? There’s no way to bring down Victor without attacking Newman Enterprises. Since Billy (Burgess Jenkins) and Ashley (Eileen Davidson) want to come after Victor, they’ll serve as the perfect puppets for Ian’s show. Of course, Victor will never let the Abbotts get away with it. Adam knows what Victor is capable of and he’ll fear the whole situation has spiraled out of control.

“The Young and the Restless” spoilers say Adam will demand that Ian call all of this off. Adam will want to drop the Paragon Project entirely in an effort to protect Jack (Peter Bergman) and preserve his relationship with Chelsea. Unfortunately, Ian has no intention of letting this plot go. After all, things are going splendidly on Ian’s side.

Ian knows about the Gabriel charade so there might be a little insurance policy there. Ian could easily reveal that Gabriel Bingham is actually Adam Newman. On the other hand, Adam could just as easily out Ian and get him in a world of trouble. What Ian and Adam have is mutually assured destruction which keeps the other from doing any exposing.

There will be a new battle brewing between these schemers. It seems viewers will get to see who really holds the power in this scenario. We also have to consider Phyllis’ recent suspicions about her pal, “Fred.” It appears Phyllis was brought into this storyline for a reason. Perhaps Phyllis will be the one to blow it all wide open. Y&R rumors hint that Adam may pay a steep price for doing business with someone as ruthless as Ian. Stick with “The Young and the Restless” for updates on Adam’s attempt to stop the chaos he started.

So Y&R fans, what do you think about the news that Adam will want Ian to call off the Paragon Project? Who holds the upper hand? Will Ian throw Adam under the bus for his own gain? Let us know what you think in the comments below and don’t forget to check CDL often for the latest “Young and the Restless” spoilers, rumors, updates and news.