The Young and the Restless (Y&R) Spoilers: Lily Plays Dirty to Take Down Hilary – Ashley Caught in Mess 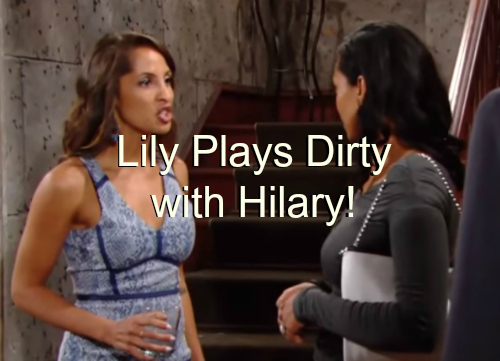 “The Young and the Restless” (Y&R) spoilers tease that Cane (Daniel Goddard) and Lily (Christel Khalil) will bond as their ambition grows. Lily will soon be more determined than ever to bring Hilary (Mishael Morgan) down.

She’s convinced that Hilary will destroy Devon’s (Bryton James) life if she keeps this up. Lily doesn’t want to see Devon get hurt and she’s willing to do anything to put Hilary in her place. Cane will back Lily up on all of her future endeavors.

Their marriage is strong and they’re really trying to be a team. That means Lily will support Cane’s new venture as well. “The Young and the Restless” spoilers indicate that Cane will get a craving for power.

It seems Hilary isn’t the only who will be playing hardball. Lily will fall in love all over again as Cane displays a fierce passion. She’ll find Cane’s determination sexy and desirable.

Cane will hope to gain some control in Genoa City, but Y&R buzz suggests he could cross the line in his pursuit. In addition, Lily could take her Hilary takedown plans a bit too far.

That storyline is obviously going to get incredibly complicated in light of Dr. Neville’s (Michael E. Knight) recent news. “The Young and the Restless” spoilers say Lily will force Ashley (Eileen Davidson) into a difficult position.

Ashley knows that Hilary’s behavior is ruthless and unacceptable, but she also knows that Hilary is experiencing symptoms of a relapse. That may not excuse Hilary’s actions, but it’s undoubtedly what will save Hilary down the road.

Whenever a soap character becomes this atrocious, tragedy usually strikes. By putting a cruel character in a perilous or upsetting situation, the audience becomes more sympathetic. It’s a common redemption tactic and it typically works.

Most Y&R viewers are even feeling a little sorry for Victor now that he’s moping around in prison. They’ve thrown in some flashbacks of Victor’s terrible father for good measure.

Likewise, we’ll probably see Hilary’s enemies drop their pitchforks if she slips back into a coma. When Dr. Neville inevitably finds a true cure, Hilary can wake up with a whole new perspective.

The show might attribute Hilary’s dreadful conduct to post-traumatic brain injury or drug side effects. Max (Jared Breeze) is currently getting a pass for his evil acts thanks to his brain tumor.

Once Max has his surgery, he may become the best-behaved child in town. Will Hilary get an overhaul, too? Will Lily feel guilty that she went after Hilary? What’s up with Cane’s power trip?

Stay tuned for updates on the chaos ahead! Sound off in the comments and don’t forget to check CDL often for the latest “Young and the Restless” spoilers, updates and news.