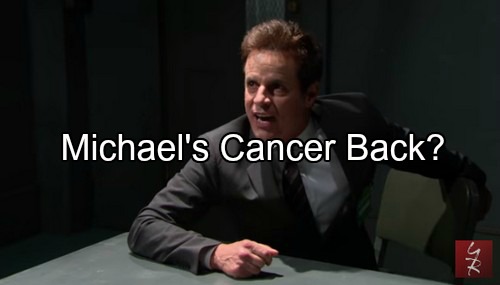 The Young and the Restless (Y&R) spoilers ask if Mal Young will do the right thing and revisit Michael’s battle with prostate cancer – a compelling storyline that was suddenly dropped leaving many Y&R fans upset. The word remission brought relief to Michael Baldwin (Christian LeBlanc), his family, and friends in the recent past on ‘The Young and the Restless’.

However, that life-threatening and marriage-affecting battle with prostate cancer hadn’t been defeated, but was placed on a future The Young and the Restless storyline shelf. Now that Mal Young has taken the reigns at CBS’ top daytime steamer this poignant arc should be revived.

Depending upon how issues are addressed, deep connections can be created with Y&R viewers through honest explorations of real-world problems. Of course, health scares are common among tens of millions of individuals.

These tense topics have often been mined by The Young and the Restless and by all other daytime dramas. Doing so provides audiences an outlet to explore potentially unresolved elements within the lives of those they care deeply about, or within themselves.

Michael visited the doctor a few years ago after he began experiencing changes in his romantic drive. That specific concern never existed in the past, so he was understandably miffed. Resulting tests confirmed high PSA levels and a diagnosis of prostate cancer, which he hid for an extended period of time from Lauren (Tracy Bregman) and others.

Kevin’s (Greg Rikaart) peaked interest eventually led to him to him discovering Michael’s health secret and refusal to confront the matter aggressively. Personal pressure eventually allowed Lauren and Fen (Max Ehrich) to be informed of the truth, but that didn’t prevent another problem from forming.

Facing what he believed was a permanent inability to perform his marital duties, or even his potential demise, Michael distanced himself from Lauren. He promoted a misguided relationship between his wife and Cane (Daniel Goddard) as a means of setting her up with another man.

He also opted to separate from Lauren for awhile. After moving toward divorce, Michael finally agreed that he couldn’t live without his soul mate. So, this enduring couple thankfully reconciled on ‘The Young and the Restless’.

The Young and the Restless spoilers know that there are further engaging stories that could be explored if Michael’s cancer were to return. It would be particularly vexing for viewers if this well-liked character began receiving treatments that weakened his physical appearance, while Victor Newman (Eric Braeden) attempted to exact vengeance against the man who sold him out in court.

Also, a more detailed exploration of the toll that cancer can take could be presented as a means of promoting public awareness. Yes, LeBlanc and his cast mates could be given another meaty story in which this deeply serious topic is presented.