The Young and the Restless (Y&R) Spoilers: Tuesday January 26 – Dr. A Watches as Sage Slaps Nick – Phyllis and Natalie’s Plan 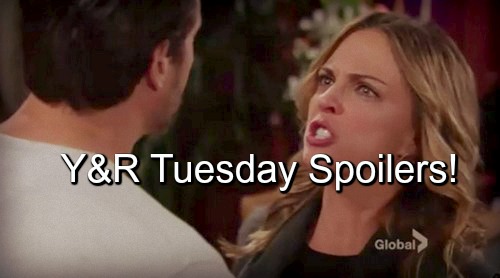 “The Young and the Restless” spoilers for Tuesday, January 26, tease that Dr. Anderson (Elizabeth Bogush) will feel like she making some headway in her current plan. The preview video shows Nick (Joshua Morrow) telling Sage (Kelly Sullivan) that they should go somewhere to talk.

As Dr. Anderson watches nearby, Sage will call Nick a traitor and give him a hard slap.

The question is: could Nick be starting to accept Dr. Anderson’s claims or is this still part of Nick and Sage’s scam? With Sage’s approval, Nick decided to get closer to Dr. Anderson by arranging a meeting with her. Nick was hoping to learn more about the shady doc’s background.

Dr. Anderson suggested that Sage could be on the verge of a mental breakdown and she needed to be committed.

It’s tough to believe that Nick is buying all of this just yet, but doubts could soon begin to creep in. Thanks to Dr. Anderson, Sharon (Sharon Case) is also becoming wary of Sage. By making Sage look crazy, Dr. Anderson seems to be driving her down that path. Sage isn’t obsessed with Sully, but she may end up being committed anyway.

When this storyline started, many Y&R viewers predicted that Sage would eventually head to Fairview. Will Nick really let it come to that? If he does, there’s a good chance that Adam (Justin Hartley) will be Sage’s knight in shining armor. It should be interesting to see where this leads. 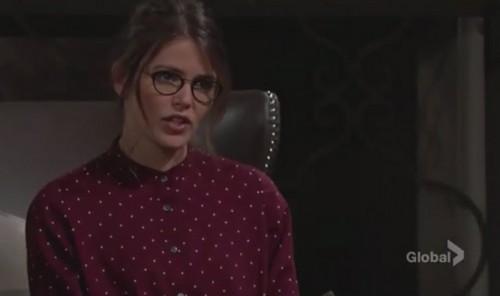 Elsewhere, Phyllis (Gina Tognoni) will have a request for Natalie (Mara McCaffray). “The Young and the Restless” spoilers say Phyllis will ask Natalie to work with her on a new plan. It looks like Phyllis has been in touch with Natalie before. Now Phyllis wants Natalie to buckle down and help her achieve her goal.

We know that Phyllis is desperate to send some karma toward Victor (Eric Braeden). Phyllis probably wants to take back the project for Jabot or at least make sure Victor gets conned. Meanwhile, Victor will be irked by the news that Natalie has given him the slip.

Nikki (Melody Thomas Scott) will say she hopes Natalie went far away and took her drama with her. Unfortunately, a whole lot more is coming. Stick with the CBS soap for updates on the chaos ahead.