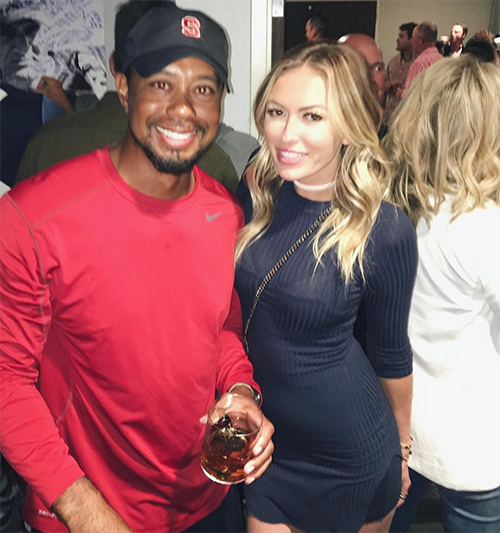 If there’s one thing Tiger Woods can’t get enough of in his life, it’s being surrounded by hot blondes. The golf legend, who not too long ago ended his relationship with long-term girlfriend Lindsay Vonn, was spotted getting rather up close and personal with Wayne Gretzky’s daughter, Paulina Gretzky.

According to TMZ, Tiger and Paulina both attended a Ryder Cup celebration party over the weekend. The two posed for a picture, which has many fans and critics wondering if Tiger’s on the prowl again?

Of course, Paulina is currently engaged to professional golfer Dustin Johnson. The former model gave birth to their son, Tatum, last year and, according to her social media accounts, the couple is still very much together – even though they are yet to set a wedding date. And even though Paulina herself shared the photo of her and Tiger on her Instagram account, many skeptics still think that Tiger – who single-handedly destroyed his career after he was caught cheating on a number of women while with Elin Nordegren back in 2009 – has a penchant for women who look just like his ex-wife.

Then again, no one knows for sure what Tiger was thinking while posing with Paulina for the otherwise harmless photo of the two. Sources say that Dustin Johnson was at the party, too, so it’s doubtful that Tiger would make a move on another man’s fiancée with him in the room. But then again, this is the same Tiger Woods who went to rehab for his sex addiction after being unfaithful in his marriage for years. There was even speculation that Tiger allegedly cheated on his ex-girlfriend Lindsay with multiple women during their relationship as well.

Clearly, Tiger’s one and only concern in his life is himself and that’s why he had had such a hard time staying monogamous or faithful to anyone. In other words, a tiger never changes his stripes.

Tell us CDL readers, what do you think? Is Tiger Woods desperately looking for a new ‘hot blonde’ to call his girlfriend? Or should the golfing ace continue to stay single? Let us know your thoughts by dropping us a line below and, of course, don’t forget to check back with CDL for all the latest news on Tiger Woods and all of your favorite celebrities right here.

Had so much fun @ the Kapalua Zipline!! Thanks so much baby for making my day ☺️ @djohnsonpga