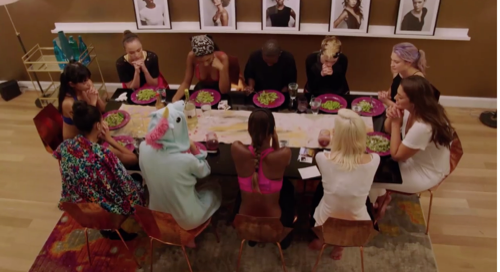 Tonight on VH1 America’s Next Top Model (ANTM) airs with an all-new time.  ANTM airs with an all new Monday, January 16, 2017, cycle 23 episode 6 called, “Out for the Count” and we have your weekly American’s Next Top Model recap below.  On tonight’s ANTM episode as per the VH1 synopsis, “Two models become romantically involved, but it could cost one of them the competition. Later, the ladies take on a body-in-motion challenge with Chanel Iman.”

America’s Next Top Model (ANTM) begins tonight with Kyle worrying about her being in the bottom two. She wants someone to comfort her and she is looking towards Marissa. Krislian, Paige and India discuss how hard panel was that night. Kyle lays on Marissa asking her to rub her head and calm her down. Marissa admits she doesn’t believe in falling in love with a gender.

Ashley Graham arrives at the house, telling them they are going to cook dinner and she wants to get to know them on a personal level. This week’s theme is all about body and strength and she is going to be their mentor all week. They are making her signature dish called kale pesto pasta; she tells them they need to eat and eat healthy. Krislian really connects with Ashley revealing she was sexually harassed too.

As they discuss the tough elimination, Ashley suggests that Kyle put on a pair of heels. Ashley takes a tour of the house. The models offer her to stay the night, she jokes that she has a man at home and she is the only one who can leave. Binta tells the girls it is embarrassing for this house to be so dirty, some of them casually wipe stuff while Binta cleans the entire house. Tatiana and Binta get into a fight over her hair being everywhere in the bathroom, everything coming out of Binta’s mouth is nasty.

Marissa and Kyle are cuddling again but Kyle is concerned that Marissa is only turning nineteen. They do kiss, and things begin to heat up between the two of them. The ladies arrive and will be doing extreme posing. Each one of them will be leaping in the air off the trampoline; Ashley tells them photo shoots like this are why its critical for their bodies to be in tip-top shape. The twist is they only get one shot to get it right. The model with the best image will receive a special treat.

The winner of the challenge is Paige. She has won a 90-minute deep tissue massage at the house and she is able to choose another girl to get it done with her. She shares it with Tatiana, they are discussing Marissa and Kyle and how Marissa needs to focus on the competition.

The next morning the girls get a RitAlert. She tells them that she is known for knocking out her competition in business and given that this week’s theme is all about body and strength. Now its their turn.

The models are excited because they all feel they are very active. They arrive at Gleason’s Gym that is all about boxing. Ashley Graham and Drew Elliott meet them there. Ashley tells them boxing is trending in the high end modeling world. Drew tells them today they are going to put their bodies in motion but the trick is to remain beautiful.

Kyle again frets over being in the bottom two last week, but her budding relationship with Marissa is distracting her. Paige tells her today she can redeem herself. Ashley arrives and introduces the models to supermodel Chanel Iman. She will be shooting with them, which means they will have to out super model the supermodel.

Ashley isn’t happy with Kyle’s shoot saying she is very one-dimensional and its because she is too distracted with Marissa. Drew and Ashley didn’t like her work at all. Drew tells Krislian this is a big one and she needs to show she can do this. Ashley feels nothing is translating in her shoot.

Back at the house, some of the girls are encouraging each other. Marissa and Kyle are polar opposites, Marissa gets up in the middle of cuddling and Kyle wants to know why she is apologizing. Marissa says she is too needy and annoying. Courtney tells Marissa she is being difficult, she knocks over a table and leaves. Instead of Kyle letting it go, she continues follows Marissa to the living room and continue to fight. Courtney follows them and they both order Courtney to go away. Marissa threatens her.

In panel, the models arrive to see judges, Law Roach, Rita Ora, Ashley Graham and Drew Elliott. Cody is really pulling ahead in the competition. Drew is worried they can’t get diversity with Courtney. Kyle is told it was a rough day for her, but there is no openness with her; they don’t feel she is different enough to pull through. Marissa’s photo has great energy. Tatiana’s photo is fabulous and Rita says its her favorite photo so far.

The best photo goes to CoryAnne. The bottom two are Kyle and Krislian. Rita tells Krislian that her transition makes them so proud but the judges are concerned she reached her peak. Kyle is told this week was almost a bust for her; it is clear that she is trying hard but the question is that enough. Kyle has another chance to be Next Top Model.

Rita tells Krislian to watch the show back, and be proud of changing into a whole other woman. She says her goodbyes to the other girls. She is sure bigger and brighter things are in her future.