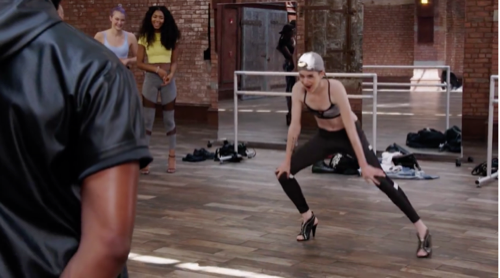 Tonight on VH1 America’s Next Top Model (ANTM) airs with an all-new time.  ANTM airs with an all new Monday, January 23, 2017, cycle 23 episode 7 called, “X Marks The Spot” and we have your weekly American’s Next Top Model recap below.  On tonight’s ANTM episode as per the VH1 synopsis, “Stacy Mckenzie joins forces with Beyoncé’s choreographer, Chris Grant, to challenge the models to create their own signature dance routine for a block party video shoot.”

Krislian’s elimination had been a hard one for the house. They knew that they were going to miss her and they had also hoped that someone else would naturally go home ahead of her. But there was no changing Krislian’s elimination and there were more available spaces with her gone. So one girl in the house had been looking at the spot and figuring out whether or not it was going to be enough for her however Marissa had come out of nowhere and had thrown her things on that side of the closet. Marissa had said that area was hers now and she had gone out of her way to be rude about it.
T ha
However, the others were quickly becoming accustomed to Marissa’s behavior. They considered her to be the overconfident younger sister and so they saw her as more or less a child that sometimes needed to be playacted. So no one paid attention to Marissa’s behavior and they later focused their attention on Rita Mail. The models had apparently learned that they were going to be heading to a dance studio yet they hadn’t known that Stacey Mackenzie was going to be there with celebrity choreographer Chris Grant. Chris Grant did the choreography for Beyoncé’s latest tour and he actually left that halfway through in order to make a special guest appearance on ANTM.

So Chris’ time was valuable and no one should have wasted or ignore what Stacey was trying to tell them. At least not during a challenge! Yet, there will always be the few that grow too confident. Like Paige who would gone on to focus on the dance moves Chris had showed her rather than remember she should also be modeling though Paige’s problem had been that she was a trained dancer and had thought that she could easily win the challenge. And so Paige had relied too much on the technical footwork and had accidentally given duck face. Then again Paige’s duck face was better than Marissa’s laughter.

Marissa hadn’t taken the challenge seriously and both Stacey and Chris had seen that. Though they had been hoping that Marissa would get their act together and in the meantime, Tatiana had been the challenge winner. So everyone had gotten their critiques here and there so they knew that they were supposed to work on that back at the house, but Kyle had taken the fact she couldn’t dance in her stride and had focused more on Marissa than she had anything else. Kyle had gotten back to the house and she chose to make Marissa laugh over practicing.

Only one of the girls had said something in the confessional that had sounded ominous. She had said that Kyle was in the competition to have fun while Marissa was here to model which could mean she didn’t think their relationship would last or that she was sure Marissa didn’t feel a thing about Kyle. But either way, the girls had been given a routine and the next day they had been told that they were going to be a music video directed by Director X. Director X was another known name and he had plenty of fans on set however today he was shooting a block party video.

The video was about a block party in Harlem and it was supposed to have a sleek feel as well as a bit of fun. However, Marissa had been a problem for Stacey from the very beginning. Marissa hadn’t known the dance moves and she had given Stacey attitude because she didn’t like it when the other woman tried to tell her that she needed to work a little more before shooting the video. So Marissa had gotten to near shouting levels with Stacey because she thought she was better than everyone else and later she had messed up in the video. She had missed marks or had taken them too early and for the most she committed to the same move.

Marissa would stomp around and them move her hat or her arms. Yet, she had thought she killed because she was Marissa and it turns out this that type of competition. So Marissa floundered because of her music video and the fact she had given Stacey attitude had also worked against her though surprisingly her video was not the worst of the night. Kyle had also lost track of the dance routine and her awkwardness had made the video uncomfortable to watch which was just a little worse than the girl that came across looking crazy (Binta) and the girl that only knew how to pose (Cortney).

So best video of the night had gone to India. India had been comfortable and that had showed in every single thing she did. Though Paige had come in as a close second. Paige had remembered to model as well as dance for the video and so she would have won if India hadn’t finally gotten tired of being in the middle of the pact, but the bottom two hadn’t been a struggle for anyone to figure out. It had been Marissa and Kyle so the judges chose to eliminate Kyle. They had said that they were tired of seeing a glimmer of the model she could be and that they now wanted to see models.