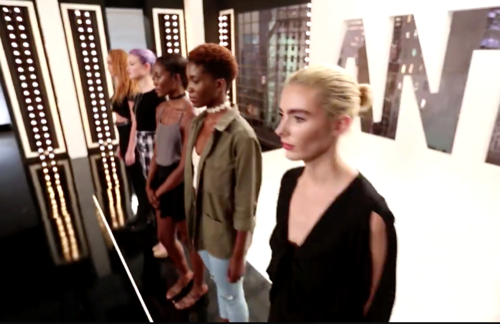 Tonight on VH1 America’s Next Top Model (ANTM) airs with an all-new time.  ANTM airs with an all new Monday, February 8, 2017, cycle 23 episode 11 called, “Celebrity Life” and we have your weekly American’s Next Top Model recap below.  On tonight’s ANTM episode as per the VH1 synopsis, “The models experience a day in the life of their celebrity host Rita Ora, as they are bombarded by the paparazzi throughout New York City and later tasked to personify her Paper Magazine cover.”

America’s Next Top Model (ANTM) begins tonight with the models admiring India’s photo resembling Katy Perry. CoryAnne says India doesn’t have star quality and is the only one to compliment Tash for tying with India for best photo at the last panel.

While speaking on the confessional camera, Cody feels that she doesn’t need to praise her twin, Tash for the photo. She doesn’t have to cheer her on and steal her thunder. She admits she was an outsider in her family and Tash got all her validation from family members. She feels she cannot let Tash take this from her because she has taken everything from her. Courtney thinks her biggest competition is India, which sucks because she is the only girl in the house she connects with.

The doorbell rings and India opens it to let Rita Ora in and take her on a tour of the house. She sits with the models to talk because she feels they haven’t actually gotten to know her yet. She shares that she sees herself in the girls and them in her.

She tells them she moved to New York City on her own at 17 and her parents weren’t speaking to her because she didn’t chose education first. She reminds them it is tough and they have to look after themselves because this is what they wanted; admitting it is very lonely and they all inspire her for their sacrifices. She assures them it is okay to be scared because she was terrified to take over for Tyra Banks, acknowledging those were big shoes to fill.

Cody lashes out because people say her sister Tash is such a fighter, but she is the one who is actually the fighter. She is furious that she doesn’t get the credit, that she came to NYC by herself and found them an apartment, she started modeling first and Tash doesn’t get everything she has done for her.

Rita suggests Tash says thank you to Cody, instead Tash says she could say the exact same thing. She is annoyed that they are still talking about this and feels Cody is doing this in front of Rita to make her look bad. Rita says they don’t need approval from anyone else.

Rita tells the models they will be hanging out tomorrow as they get to experience a great day in her life, and that is all she is going to say. Once Rita is gone, the other models feel what Cody and Tash did could be to their advantage but Tash and Cody continue to argue with each other. The following morning, the models step off their bus and there are cameras everywhere and they have no idea what is going on.

They arrive at the Haven rooftop at the Sanctuary Hotel where Rita is sitting. She welcomes them to a day in her life where the paparazzi’s cameras are more in your face than at a fashion model shoot. Their challenge is to face the paparazzi when they leave and they will be evaluated by how well they took her advice. She wants them to use the paparazzi as free promotion to help enhance their brand. They need to be confident, passionate, fashionable and to not hide their face; live your life like you want to be seen.

Drew Elliott greets them, revealing they are going to do a photo shoot for a Paper Magazine cover; and this is where they will separate the girls from the models because only a superstar gets a cover of Paper. The winner of ANTM, will have this cover on Paper Magazine for the world to see.

They review the before and after paparazzi photos and the winner of this challenge is Courtney. Drew Elliott tells her to pick a friend, she chooses India and they are going on an adventure at Universal Orlando resorts, having a day off. Mickey Boardman works with Drew on the photo shoot. Drew advises the photo is all about the face and they really need to make eye contact with the camera.

Tash is up first in the Paper Magazine photo shoot and is struggling with instructions. Drew says she is not going to like any of her pictures. Drew says she was a bomb and it was weird, reminding her she isn’t a magician. She quickly recovers.

Cody is happy to do the shoot because she can finally show them who she is. Drew said Cody nailed it in the first frame, having the confidence of a megastar. CoryAnne also does the weird hands and Drew says she looks really old, scrunching her face. She gets better when she opens her eyes wider.

Tatiana feels the pressure while Drew tells her to be herself and they honestly don’t have a cover shot yet. Once she relaxes and gains confidence her photos are fabulous. India is told o imagine this is her introduction to the world. Right away Drew is saying her photos are great and gorgeous. Drew says India knows what she is doing and she’s got this.

Drew tells Courtney she can deliver a great face, so make sure she does it. He reminds its a beauty shot, and she says that is her forte; again she is told over and over not to touch her face. Drew says Courtney tries to bring strength into her photos that isn’t necessary.

As Courtney and India plan their excursion to Universal Orlando, the other models are excited to see Courtney gone and wonder how India is going to survive a whole day and night with Courtney. Cody and Tash attempt to speak to each other but are grateful others are sitting in on their conversation. The two of them loved being big kids at heart; Courtney thrilled to be at the Wizarding World of Harry Potter. India comments that its a shame the girls in the house don’t get to see this side of Courtney.

The models arrive at panel where Ashley Graham, Law Roach, Drew Elliott and Rita Ora are their judges. Courtney is called up first, Rita and Ashley loved it. Drew said she nailed it but getting there was hard because she couldn’t find her light.

CoryAnne’s photo was loved by Law and Rita said the attitude is there but Drew says the photo wasn’t for him at all. Its very Tim Burton and spooky, and says she can’t blame hair and makeup.

Rita reminds Cody about knowing the situation between her and her twin sister. Cody says she feels good and a lot of what Rita said was put into perspective. All the judges LOVED her picture.

Tash’s photo is not very good at all. Rita says it looks like a photo that was taken at an after party and had to be made into a leaflet. Law liked it for National Geographic but not Paper Magazine. Drew says last week and this week are polar opposites, and he isn’t impressed.

India’s photo is amazing and Law says it is a real cover for Paper Magazine, but he says he would pick up the magazine thinking she was Gigi Hadid. Ashley says its not a bad thing look like her, but now its time to let people get to know her. Drew says she is very nice but he still isn’t getting super star from her; he believes she is one in pictures but he hasn’t seen it in person.

Tatiana is the last model to be judged, Ashley loved her pose and how she looked so effortless. Law says everything in the photo is right. Drew says he is glad they got this cover because he believes she will be a superstar. She needs to take it to the end and stop being unsure about herself.

After the judges deliberate: Cody, India, Tatiana and CoryAnne are all safe; leaving Courtney and Tash as the bottom two.

“Courtney, you walked on set, sure you could nail this beauty shot, but up close you seem less confident. You have the undeniable face of a model, but being a boss means being confident in any kind of photo.”

“Tash, you’re confidence is your greatest asset, but it is also your greatest liability. Last week your picture was incredible and hands down we made the right choice to bring you back; but this week’s cover was not your finest work, whether or not you agree. Your inability to see your flaws could be your downfall.”

Courtney is congratulated and told to join the rest of the girls. Tash says she can’t be stopped because she is a warrior. She hugs Cody and tells her she loves her and to kill ‘em.