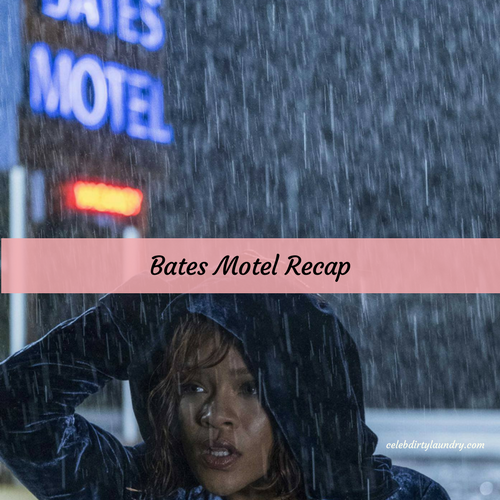 Bates Motel airs tonight on A&E with an all new Monday, March 20, season 5 episode 5 called “Dreams Die First” and we have your weekly Bates Motel recap below. On tonight’s season 5 episode 5 as per the A&E synopsis, “Norman (Freddie Highmore) attempts to piece together Mother’s movements. Elsehwere: Dylan and Emma confront an ugly truth while Sam’s girlfriend Marion makes a spur-of-the-moment decision with far-reaching consequences.”

Bates Motel begins with Norman (Freddie Highmore) waking up alone in bed, rushing to the bathroom and getting sick everywhere. He takes off his shirt and sees scratches and a bruise on his shoulder. He wanders the house looking for his mother, Norma (Vera Farmiga); he looks out the window and sees tire tracks in the driveway and breakfast for one on the table.

The phone rings and it is Sheriff Jane Greene (Brooke Smith), she wants him to come to the station so she could talk to him about something, not being specific; he assures her he will be right over.

Emma (Olivia Cooke) finds the earring in one of the drawers, while looking for a stamp. Dylan (Max Thierot) knows it is her mom’s earring, but he says it was his mom’s and he squeezes it in his hand, not putting it back in the drawer.

Norman is at the Sheriff’s office, and she wants to know anything Norman can share on the whereabouts of his stepfather former sheriff Alex Romero (Nestor Carbonell). She knows he hated him, Norman says that Romero had no friends and that is why he clung to his mother so bad.

She can’t help but feel he is headed home for some unfinished business. She also can’t dismiss the tie-in to Jim Blackwell was too much of a coincidence. She pushes him to see if he would know what that connection would be.

She brings up the physical fight at Norma’s funeral, and the threats that were made. Norman says he just didn’t want him there because he was part of the reason she took her own life; she says that some heard him say Norman was the one who killed his own mother.

She confronts him about the visit he made to Romero 24-hours before he escaped prison. Norman says he is sorry that he never said anything because he didn’t feel it relevant, and was hoping the visit would bring some sort of closure but it was a huge disappointment.

She warns that Romero may be coming for him because the visit may have provoked Romero. As Norman leaves, she tells him that Romero is armed. When Norman returns home he yells for “mother” and when he gets no response he calls The White Horse Bar, asking if Norma had been there?

The bartender (Brendan Taylor) tells him she left the keys at the bar, and if she doesn’t get it today, it’ll be towed. Norman asks if she left with a man, he said probably, Norman thanks him and hangs up.

Emma comes out when Dylan has his hands full with their daughter. Emma reassures him, they are doing fine and wants to talk about the earring. She tells him maybe he should reach out to his mom, Norma; that she would be an amazing grandmother. Dylan gets rude with her and tells her to drop the Norma thing because he knows what he wants, and doesn’t need to be told differently.

Madeleine Loomis (Isabelle McNally) calls Norman, apologizing for last night. She offers him a ride to go get his car since her husband, Sam (Austin Nichols) is away again. Norman claims the car was stolen the night before. She doesn’t want him to think bad of her for wanting companionship.

In Seattle, Sam is in bed with his girlfriend, Marion Crane (Rihanna). She tells him she needs to get to work, he says her boss is an ass. She tries to convince him to stay in Seattle, instead of Oregon and get married. He says they can’t because of his debt. They love each other and he should just marry her already.

She suggests coming to White Pines Bay and he is persistent that she be patient and they will have a life together. She says she has been patient and has other options. He says he gets it and doesn’t deserve her, she just says she misses him. They hug before he leaves.

Marion rushes into work, where she arrives into the meeting to have papers notarized. The client taunts her with a briefcase full of cash and calls her “sweetheart” as she closes the door.

Madeleine asks Norman who he keeps insisting she speaks with her Sam; asking what does he know that she doesn’t. Norman tells her the truth about Sam bringing another woman to his motel; and that was before he ever met her.

She is upset he has known this whole time, and she was just the idiot in the middle. He apologizes and she says he could be saying it to tear her and Sam further apart. She shouts at him to get out of her damn truck.

Norman goes into the bar asking for the keys, when the bartender asks if he is okay to drive, Norman says he is and takes the keys. Norman asks if he has seen Norma, he asks if it was a trick question.

Norman asks if she was in the company of a man who looks like an escaped convict, he asks if he is joking. Norman gets in the car and says its going to be all good. He finds a pair of lacy panties in the back seat of the car.

Marion is visibly upset at work, when her boss shows up at her desk; even though she is feeling sick, he asks her to deposit the money before the bank closes. She stands up and says she is interested in Janet’s job. He says she should work on a degree in night classes and invest in her future.

She asks him for a raise, he berates her and tells her that her sense of timing is horrible and to come in early on Monday and ask at a sensible time. She returns to her desk and stares at the case of money in front of her.

Norman is driving home in the rain, when he sees his therapist Dr. Gregg Edwards (Damon Gupton). He meets him in the coffee shop, thanking him for all his help. He asks about Norman’s blackouts, he says he hasn’t had any since he has been on the medicine he prescribed.

Dr. Gregg wants to know where he is getting his prescriptions filled since he hasn’t received a request for refills in over a year and a half. He says he started seeing a psychiatrist that is closer; Norman believes Gregg doesn’t believe him but he tells Norman he is just glad he came to have coffee with him because as doctors you always wonder why a patient leaves you.

He apologizes he pushed him too far too fast; Norman wants to know what he means. He explains about the coping mechanisms he was using through the traumas through the years.

Dr. Gregg talks about Norman’s mother; and he admits that he sometimes he sees his mother when she isn’t there and sometimes he becomes her. Norman swears that isn’t happening any more and after the psychiatrist asks for him to resume their sessions; Norman runs out the door telling him no.

Marion calls Sam from her place, saying she has something important to tell him, she has the case of cash in her room. She grabs a suitcase, gets in her car and heads to White Pines Bay, but as she is traveling the police pull her over. He pulls her over for her coat covering her license plate; he tells her to pop the trunk and fixes it for her.

At home, Sam is opening a bottle of wine while he is making dinner with Madeleine. It’s Marion who asked if he got any of her messages and she is 30 minutes from town.

He says he can’t meet her because its a bad time; he at first says he is in a work meeting, then he says he is embarrassed but he lives with some guy and can’t have guests. She says to meet him at Bates Motel; when he goes back inside Madeleine asks what her name is?

Dylan tells Emma they need to talk, she comes to sit with him. He tells her he cut off contact with his mom because he thinks Norman is sick, far worse than she thinks. He tells her about Norman’s rage and he could do anything, she asks what bad things?

Dylan tells her about their teacher Blair Watson, how he was a suspect in her death. He shares that Norman killed his own father, but he doesn’t know all the details because Norma always covered for him. Dylan says he was going crazy over his own brother, but felt safer when he was in the facility.

Dylan pulls out the earring, and tells Emma it was HER mom’s earring, not Norma’s. He doesn’t know why Norman kept it, she asks if maybe her mom left it while she was in the motel? Dylan admits he didn’t tell her the truth because he doesn’t know if Norman did something to her.

He tells her that Norma left him alone with her mother at the motel and neither him nor Norma can find her. Emma is furious that he withheld the truth from her, as Katie begins to cry she tells Dylan to take a walk because if he doesn’t she will start screaming and she doesn’t want Katie to hear that.

Norman is in the car while it is raining reciting that sometimes he sees mother when she isn’t there and sometimes he becomes her. He returns to the bar, where a patron says she likes the new look. The bartender asks him if he is okay, hands him a drink for his tab but tells him to take it a little easy as last night was a little crazy.

A man (Eddie Flake) approaches him asking if he got home okay last night? Norman says thank you as he tells Norman to have fun. As Norman walks through the bar he has flashbacks of what he did the night before. The man (Michael Doonan) he was with the night before enters the bathroom and attempts to kiss him calling him Norma.

Norman shakes to the ground as the man sits with him, asking if there is anything he can do for him; he says he needs his mother. Norman sees a flash of Norma, who says they are supposed to be together. He stands up and runs out of the bar to his car. He speeds back to the house.

Emma is on the computer looks at the Bates Motel website, and she finds a website revealing that “Norma Bates, Business Owner and Local Sheriff’s Wife, Found Dead of Apparent Suicide”; Emma reads the article in shock.

Back at the home, Norman stands in the rain and walks up the stairs to the house. He stands at the door, and closes his eyes for a few moments. Marion arrives at the Bates Motel.