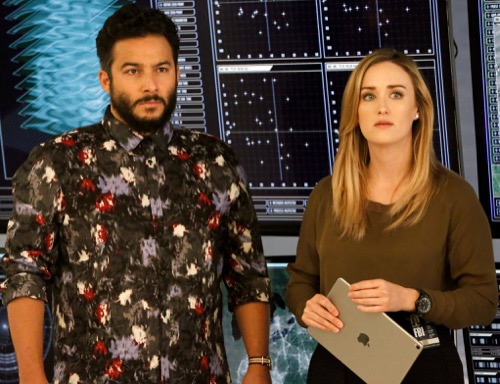 Tonight on NBC Blindspot airs with an all-new Friday, December 1, 2017, episode and we have your Blindspot recap below.  On tonight’s Blindspot season 3 episode 6, “Adoring Suspect,” as per the NBC synopsis, “The team goes undercover on a movie set to stop a terrorist plot with unlikely backers; and Roman blackmails Weller with a horrible secret about Jane.”

Roman needed a favor. He wanted the team to investigate one of the newer tattoos and he needed them to do so sooner rather than later. But Roman knew he couldn’t just call them and tell them about the tattoo because they would try to figure out what was his end game. So Roman decided to use Weller to deliver his message and Weller wasn’t in a position to turn him down. He had found out about Jane’s daughter long before anyone else on the team and so he it was too late for him to tell his wife that he had known about her daughter because he knew she wouldn’t forgive him. And so Roman blackmailed Weller into doing his bidding.

Weller would do anything to keep Jane. But finding a way to connect a tattoo with overrated actor Keith Rhodes was perhaps a new low for him. Weller had pretended he had seen something in an article about Rhodes at the dentist’s office and fortunately Patterson had bought it. She had done a search on Sacred Lynx Production because its logo had supposedly been what triggered Weller’s memory and so she had been surprised when his hunch panned out. The production company’s logo had been a tattoo and it was connected to an Eastern European terrorist group called Brigada.

Brigada was slowly gaining a name for themselves by causing mass amounts of death and destruction. But Brigada had stuck to set areas because their leader Niko Popov had seemingly wanted to stick to those locations through the team believed things might have changed. They found out from Hirst that Niko was called “the Plague” because death followed him wherever he went and so it had alarmed everyone when they saw that Niko was in the city. He had been hanging around Rhodes at afterparties and they eventually found out he had used the production company to fund terrorism. So what they wanted to know was Rhodes’s part.

Rhodes was a child actor that managed to transition without any problems. But he was known as a diva on set and there were plenty rumors about him taking out his frustrations on anyone in the production crew. So Rhodes hadn’t come across as a terrorist, but the team wasn’t going to write off anything until they were sure he was clean and so they found a way to get close to him. He was in town filming a new movie about a rogue FBI Agent that just so happens to get a little too close to his asset and, while Rich had a few laughs about that, he realized Weller could easily become Rhodes’s new FBI consultant.

The actor needed someone that could tell him how to act as a proper FBI Agent and Weller managed to fit right in. He taught Rhodes how to hold his gun and how he should be prepared to shoot intruders from before they could enter through the front door. But what Weller couldn’t be prepared for was an assassination attempt. Someone had tried to kill Rhodes on set by switching out a fake defibrillator with a real one and he would have died if Weller hadn’t been there to give him CPR. So Weller and the others thought it was best to quit playing games and they brought Rhodes in after he recovered by pretending they wanted to show him around.

They told Rhodes that he could meet real agents and see for himself how they did things. But then they started to question him the moment they got him to go into their interrogation room. So Rhodes soon figured out that they weren’t messing around and that had frightened him because it turns out he really didn’t know his movies were funding terrorism. He said the guy that runs the production company, Booky, had been losing money when out of nowhere he went into business with Niko yet Niko didn’t know much about movies. He merely dragged all around the world to places Rhodes had never heard of and so Patterson looked those places up.

They were in Siberia and there were all in the same cities as weapons of mass destruction. But the weapon that Niko appeared interested in was so dangerous that a mere drop could kill everyone in their headquarters. So the team needed to find out the location of the weapons as well as their intent before they were used on US Soil, but Rhodes later told them that there was a way to find out about everything and all they had to do was break into Booky’s safe. Booky records every conversation he has with someone and so he most likely several recordings of Niko in his safe. And so all the team had to do was break-in.

But to do so, they needed a recording of Booky’s voice saying randomly generated words and so Rich came up with an idea. He had Rhodes set up a meeting between him and Booky however he then pitched an insane movie idea that was guaranteed to get Booky to say the necessary words. So Rich had come across as crazy and by luck, he got them into the safe where they found the recordings. The recordings, on the other hand, didn’t stop Reade from going off at Zapata and Patterson. The ladies were investigating Hirst and they had even brought in both Jane and Weller. And so Reade had gotten upset with them because he wanted them to back off of Hirst.

Reade had questioned her about knowing Loewe’s first wife and Hirst claimed not to remember it because it was so long ago. But that had been enough for Reade and he wanted that to enough for the others as well. So he told Zapata and Patterson to back off and barely remembered the recordings until they found something. It was a recording of Niko using a lot on set to house the cyclosarin though Weller and Jane showed up to the lot the same time as Niko’s men and so Rhodes who thought he was going to be a hero ended up getting shot. He thankfully had Rich who happens to be his biggest fan looking out for him while the others dealt with Niko and so Rhodes made it through.

Weller and Jane, on the other hand, had to deal with a pretty dicey situation and they only managed to stop Niko from releasing chemical weapons because Rich showed up to be a big help as well. But saving the city from having their first responders wiped out, hadn’t deterred Reade from wanting to clear Hirst’s name and so he looked into the Loewe case again. That time he found out she had met up with Loewe last year and had also forgotten about that meeting. So Reade tried to get a reasonable answer from Hirst and she basically told him to back off because she was the one to secure his job for him.

So Reade did admit to himself that Hirst was dirty and he later joined the others in investigating her!