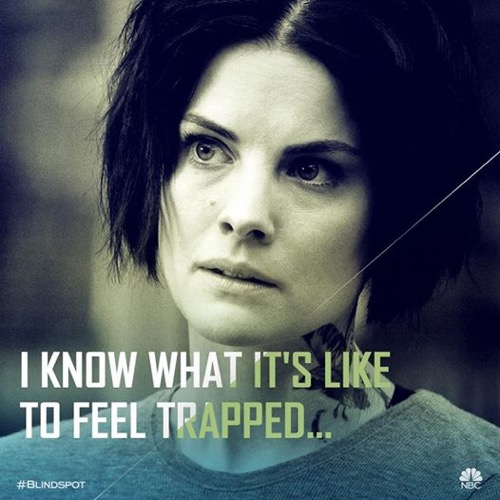 Tonight on NBC Blindspot airs with an all-new Wednesday, March 22, 2017, episode and we have your Blindspot recap below.  On tonight’s Blindspot season 2 episode 16, “Weller (Sullivan Stapleton) and Jane (Jaimie Alexander) come face-to-face with Nas’ inside source within Sandstorm, and they square off with an old foe.”

Nas was attacked on tonight’s all new episode. She had apparently gotten a call from her inside source that she hadn’t heard from in over a year however she had done as he suggested and had gotten the flashdrive he left for her because he had always been so reliable in the past. But, within moments of actually getting that flashdrive, someone had come up from behind her and had tried to strangle her before she could even reach for her gun. So Nas had had to fend off her attacker and, once she did, her team questioned whether or her source had set her up.

They had all been a little concerned about the timing of the attack and how Shepherd’s man had known where Nas would be. However, Patterson had checked out the flashdrive and she had said that it had been too encrypted to be a decoy because she knew without a doubt that she would be up all night decrypting it. So Patterson’s suspicion was later proven to be right. The flashdrive hadn’t been a decoy and it had legitimately information on Shepherd that was worth killing for. Especially as it detailed she was going to be within the next few days.

Yet, Weller had wanted to double-check this source because they had still been concerned about him and what he was telling them. So the source sent them an encrypted message of Borden speaking to a mystery man and he had been telling the other guy that Shepherd was going to make some meeting at three, but the source had demanded half a million dollars in unmarked bills before he would tell them anything else and so the team had prepared themselves. They had gotten the money together and they had put Nas in place just not without backup.

It went without saying that their source had wanted Nas to show up alone yet Weller didn’t feel comfortable with putting her life as risk again and so soon after she had been attacked. So Weller and Jane had followed Nas and they had moved in when they saw that the money was being collected. But they had been in for a surprise when they found out just who their source was. It turned out that Cade had secretly been the one that was feeding them information and he said that he was no longer on Shepherd’s side.

Cade had explained that he had been an orphan that needed a purpose and Shepherd had manipulated that. Yet, Cade had seen the light when he started to find out more about stage two and so that’s when he began telling Nas things. He said he had wanted Nas or the agency to stop Shepherd from the start though he had stayed in position because he had thought that he would be more valuable on the inside. So Weller had demanded to know why if Cade was telling the truth did he try to kill his team.

So Cade told them that he hadn’t been trying to kill the whole team. He said he had merely wanted to kill Jane because she was Shepherd’s Trojan Horse and he didn’t want her to cause any untold damage. Though Cade had also gone to say that he had wanted Oscar dead because Oscar had killed Markos who he had loved and had been his family, but Weller still hadn’t felt right about trusting Cade because he said Cade shouldn’t be forgiven for trying to kill Jane and he had would pass on giving Cade immunity if Nas and Jane hadn’t told him that he was being stubborn.

The women had realized that they couldn’t pass up an opportunity to be one step ahead of Shepherd and so they had ultimately convinced Weller to relent. They had talked him into giving Cade what he wanted in exchange for the information on Shepherd. But when the team went to catch, she had surprisingly beaten them. Shepherd had somehow known that they were coming and she had killed the guy she had been meeting with. So Weller and Jane had thought that Cade had been lying to them though he said he couldn’t have.

Cade had been in their custody all morning and so he told them he couldn’t have tipped anyone off seeing as it was impossible. Though Cade did have a theory that no one liked. He thought that Weller’s team was responsible for the leak and had said it wouldn’t be the first time that someone had gotten pass their surveillance. So, of course, Weller had gotten up in arms and had said his team was above reproach however Patterson had carefully thought about what Cade said and she didn’t think he was too far off the mark.

Patterson has been having migraines since she was tortured and she had thought that it was part of her recovery. However, she had gotten an x-ray of her mouth because she remembered how hard Shepherd had clocked her and the x-ray showed that Shepherd had implanted a listening bug into her tooth. So Cade had been right. There was a leak and unfortunately it had been Patterson, but Patterson later figured out how they could use the device against Shepherd. She had gone to a secure location where the device couldn’t be transmitted and she had come up with a plan.

Patterson had suggested that they feed false information to Shepherd about Cade and how Cade was helping Roman to remember. So Weller signed off it and they had put the plan in motion however it hadn’t been Shepherd that showed up at the safe house. She had apparently been on a boat in the middle of nowhere and so Borden had wanted to handle the Cade problem himself. But neither he nor his team had known it was a trap until it was too late. They had all gotten caught by the feds and they had all chosen to commit suicide rather than offer up anything.

That includes Borden. Borden had gotten caught by Patterson and the last thing he had said to her before he detonated a grenade was that he hadn’t meant for any of this to happen. However, Patterson had said that she was fine afterwards. She said she hadn’t felt anything and hadn’t wanted to further discuss the issue with Jane yet Patterson had later denied any drugs when they removed the transmitter. She had claimed that she was allergic to everything and had just wanted the device taken out of her.

Yet, Patterson hadn’t been ok and neither was Reade. Reade had just barely passed a random drug test at work, but he hadn’t wanted to ask for time off or tell Weller that he needed time off. So Tasha had decided to tell Weller herself because she knew that Reade needed help and that hadn’t been the only thing that happened. Someone had also broken into Jane’s apartment just as she and Oliver were trying to move pass their differences and they had gotten the drop on Jane before she even knew it.