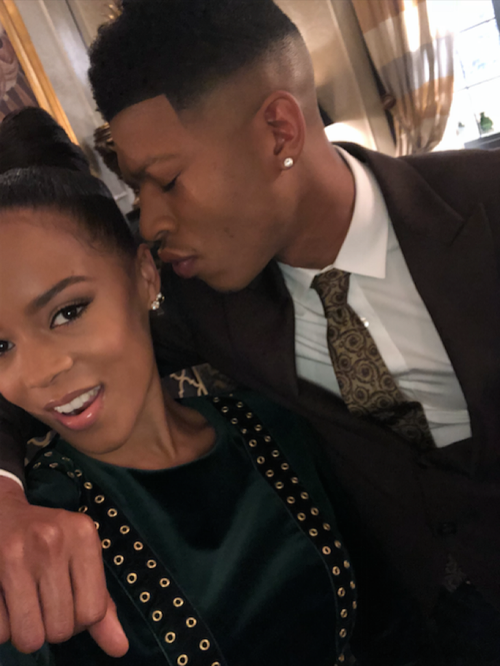 Tonight on FOX their blockbuster drama Empire airs with an all-new Wednesday, November 8, 2017, episode and we have your Empire recap below. On tonight’s Empire season 4 episode 5 “The Fool,” as per the FOX synopsis, “When the secret about Lucious’ memory is exposed, Cookie attempts to convince the board that he is fine by inviting the press to watch him produce the first 20 for 20 album. Eddie Barker jumps in to help Lucious get back in his groove and make music. Just as Andre’s feelings for Detective Pamela Rose intensify, she reveals information that’s been uncovered regarding the explosion.”

Cookie, Hakeem, and Tiana speak to Thirsty about Anika demanding custody of Bella. Cookie gets a call. She turns on TMZ. There are reports of Lucious and his memory loss. Meanwhile, Claudia and Lucious are talking. Claudia tells him that she has overstepped the lines. He is her patient. She has been inappropriate. Cookie arrives. She needs Lucious at Empire pronto.

They arrive at Empire for a conference. At the start of the meeting, Lucious tells everyone that he doesn’t need to answer questions about his health. Cookie offers to have the press follow him for 24 hours on the heels of a new album dropping. Would that make everyone feel better, she asks. They all agree.

Cookie, Lucious, Claudia and the others meet to discuss how they are going to handle Lucious and the press. Cookie wants Becky to maneuver the studio while Lucious is in there.

In the studio, Lucious listens to an artist’s record her tracks. He feels a sense of familiarity, slightly recalling that he has been there before. Within minutes he begins to regain his talents and coach the singer so that she sounds better. Everyone is happy to hear his contributions, calling him a genius.

Shine invites Cookie, Lucious, and the press in to see him perform in the studio. Shine performs his rap. Lucious tells him that he just sounds angry. He needs to work on his material. Lucious gets up to leave.

Cookie deals with Thirsty outside the studio. He gives her update on Hakeem and more. Eddie shows up. Everyone is excited. They all head into the studio.

Cookie offers to have Tiana and Hakeem sing. Hakeem isn’t there yet. Tiana sings first. Lucious listens and begins to recollect more and more, especially his love for music.

Hakeem comes to see Angelo’s mother. She isn’t there. Angelo tells Hakeem that Bella will be calling him daddy soon. Hakeem pushes Angelo into the wall against a picture. Angelo threatens to see him in court.

Andre finds Shine outside. He throws him against the wall. He wants to know if Shine has been talking to the cops. Shine says he hasn’t. Andre tells him that he is sick of hiding. If Shine wants to tell his family what they did he can.

Hakeem pulls up outside Empire. Hakeem tells Tiana that he is taking Bella to Cuba. He cannot risk losing her. He wants her to come with them. She needs to wrap up things in the studio and then she will meet him at the airport.

Lucious leaves the studio to get something to eat. Eddie wraps up things with V in the studio and tells the reporters they are all done.

Lucious goes to see Claudia. She is playing his song. She has painted for him so that he can create on a canvas the colors he sees when he hears the music. She smiles as he works. Cookie shows up. She wants to know what is going on. Claudia explains that Lucious was listening to music until she shut it off while he paints. Now he can hear it in his head while he works. Cookie watches for a bit. He isn’t listening to music, he is writing it.

Jamal sings in the studio while Eddie listens on the other side of the glass, dancing. Cookie meets with the shareholders again. She finally admits that Lucious suffered from a TBI, but he is healing. They still aren’t happy. Cookie pulls Eddie in. She asks him to serve as her advisor. Everyone is happy.

Cookie runs to find Hakeem before he tries to leave to Cuba. She tells him that they don’t run. She will help him through this. They will beat this.

Meanwhile, Lucious continues to paint with Claudia. He has a breakthrough. In the morning they wake. Lucious knows who he is. He isn’t Dwight. He tells Claudia he remembers her. Cookie is his muse. Cookie arrives. Lucious tells Claudia she can leave now. His people will send her a check for her services. She tries to talk to him but he dismisses her.