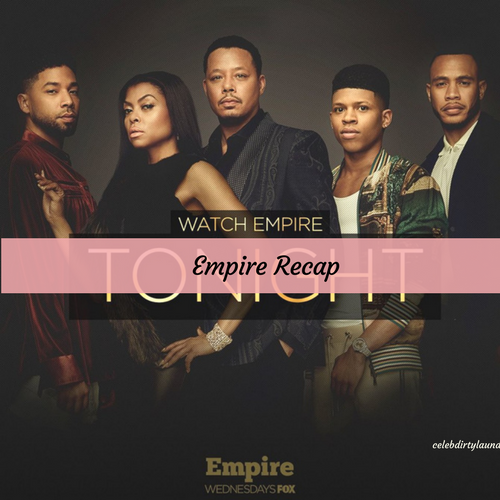 Tonight on FOX their blockbuster drama Empire airs with an all-new Wednesday, March 29, 2017, episode and we have your Empire recap below. On tonight’s Empire season 3 episode 11 “Play On” as per the FOX synopsis, “Cookie (Taraji P. Henson) tries to move forward with Angelo, (Taye Diggs) while struggling with guilt over her run-in with Lucious. (Terrence Howard) Elsewhere, Leah seeks out Tariq’s help in taking down Anika; and Jamal and Tory team up in the studio.”

Tonight begins with Cookie Lyon (Taraji P. Henson) returning home after smashing Lucious’ (Terrence Howard) prized possessions. She is wondering what she has done getting into the shower; meanwhile, Empire staff is cleaning up the glass and blood.

Cookie sits in her living room with her sister, Candace (Vivica A. Fox) who says Cookie kissed Lucious because she is addicted to him; Cookie admits that he was her first and only for over 20 years. She reminisces back to when her daddy kicked her out and Lucious put her in a motel room, and its the same night they made love for the first time.

Candace tells her she does not need to tell Angelo DuBois (Taye Diggs), she only went a little “Cookie Crazy” and nothing happened. She swears that Cookie’s future will not be ruined again to the likes of that Lucifer Lyon.

Anika (Grace Byers) and Lucious arrive at work, she asks what happened and he says they are still going through security footage. She kisses him and he meets with his lawyer, Thirsty Rawlings (Andre Royo) who introduces his mother, Leah Walker (Leslie Uggams) to her new security detail. Leah gets cheeky and Lucious tells her to behave.

Lucious is assured the security footage has been erased. He tells Thirsty that with Cookie and their son, Jamal (Jussie Smollett) dropping an album soon, he cannot be distracted from Inferno at all.

Becky (Gabourey Sidibe), Tiana (Serayah) and Hakeem Lyon (Bryshere Y. Gray) are busy with dancer auditions for the video for her next single. He shares his enthusiasm about her debut.

He suggests after this they could go to his dad’s and hang out with his daughter, Bella; Tiana says she isn’t doing that, Bella already has a mother. Leah arrives asking how Bella’s future step mother is; Hakeem says he may need her help there. While her body guard is busy, checking out the dancers, she slips out the door.

At the studio, Jamal continues to work with Tory Ash (Rumer Willis), they joke about life and talk about music legends. Meanwhile, Andre (Trai Byers) and Nessa (Sierra Aylina McClain) begin looking for a place to live, when they are interrupted by Shine Johnson (Xzibit), who brings in all his business associates for Andre to meet; Nessa looks very concerned. Andre says Shine is the one who beat Lucious at his own game and he needs to learn how.

Freda Gatz(Bre-Z) is making a drop while Andre introduces Andre to Danger who runs all the strip clubs around, any hip-hip move south east of the market, he is their guy. Danger wants nothing to do with Andre, and spits on the floor when he tries to shake his hand.

Angelo finally returns home, she brings him to the couch after they hug, because she has something to tell him. He is excited to get back in the political ring until he sees a bruise on her arm; she tells him its nothing. He picks her up and brings her to the bedroom, saying no one is going to interrupt them.

Cookie comes to Lucious’ office, calling for him. He responds that he is in the bathroom, but when the door opens Anika and Lucious come out adjusting their clothes. She asks if they should talk about what happened last night? She just wants to make sure he isn’t going to say anything about her turning into the Tasmanian Devil the previous night.

She admits that she doesn’t know what got into them last night; Lucious says she loves him, she will always love him but she isn’t ready to deal with that truth. He says he is moving forward, demanding to know when Jamal will be done the album. He says he won’t say anything.

Anika comes to see Becky about what is currently happening with their artists, when she gives her an update, Anika says that she is excited to work with her and even though she wanted the position Anika got, she was only Lucious’ assistant a few months ago and wasn’t ready for it, but she bets in a couple years Becky will be in her position. She tells Tiana that Becky is in charge, and has her full and total support.

Tory and Jamal begin to argue about the songs they are creating. She just asks him to shut his mouth and listen. She plays some heavy metal, saying its like musical heroine; Cookie comes in asking, “you still like drugs, Crackhead?” She shows her the door, but Jamal says that it was a joke.

Cookie and Tory agree, that they need to mess things up. They seem to find it. Cookie reminds him that his father is not to hear anything they are creating. She leaves saying, “Play that funky music white girl!”

Leah meets with Tariq (Morocco Omari), informing him that Lucious gave Anika a job, instead of tossing her. She tells him he has to do something about her. He brings her inside for some tea.

Jamal and Tory are creating some great music, a different vibe than his previous albums. Jamal asks the producer to not wipe the hard drive as he might want to tweak it. Tariq stops Anika in the street, saying he is going after Cookie instead of her husband.

When she tries to walk away, he serves her a subpoena and when Lucious finds out, there are going to be problems. He tells her to go home and act like nothing is wrong and tomorrow he will pick up her and her daughter, Bella to put them in witness protection.

Lucious arrives at the studio to find out what the idiots are up to. He hits play and listens to Jamal’s new songs. He turns on record and begins to play the piano; Jamal returns with Cookie and confronts his father about it is his time in the studio.

Cookie flashes back saying to Jamal that she knows this look, Lucious isn’t listening to anyone when he creates music. She remembers the moment she told him she was pregnant, and says when he gets like this all he can hear is the music.

Jamal says the song is dope and the king doesn’t need to prove who he is, he walks out of the studio. Tory hangs back, but when she decides to leave, he says he really liked her stuff.

Andre is with Shine at their studio, they stop laying beats and talk about Raphael Greene. He has a spot on the strip in Las Vegas and is looking to book some legit talent, Andre says he wants in.

Shine tells Andre that he knows about him having bipolar disorder and warns him if he ever puts his hands on Nessa, there will be consequences. Greene only wants to meet with Lucious, so Andre tells him that Greene has to meet him before Lucious would ever agree to see him.

He leans forward and tells Shine that he needs to keep Lucious alive long enough to put this deal together. He leaves saying he looks forward to meeting Raphael.

Anika is standing with the baby, Bella, saying she is doing this for her and she loves her. Hakeem’s limo arrives, and she tries to hand him Bella; he says call Juanita. Anika is insistent that he take care of her because he is her father, and she needs him to keep her safe and for once in his life, she needs him to step up.

Porsha (Ta’Rhonda Jones) pulls Cookie aside, telling her the suspicious men at the entrance are looking for her. She calls Angelo and tells him to come get her right now. Angelo informs her that she was right, they are there for violating her parole for associating with a known felon.

He is trying to figure out why they are coming after her now. He tells his driver to stop, and he is going to teach Lucious a lesson; he needs to know when to fall back, with his corny ass hairdo.

Jamal invites Derek “D” Major (Tobias Truvillion) over and tells him he is going with another producer for his new album. He backs off from D kissing him, saying there is no “us” because they hooked up a bunch of times, and he is still not out. D kisses him as he tells him he needs to recover and D isn’t part of that.

Tiana is furious that Hakeem brought the baby to her dress rehearsal. He says she needs to understand that Bella is his responsibility and she needs to be cool with that part of his life too. She kisses her saying she is beautiful; Hakeem tells her to hold Bella close so she can feel her heartbeat.

Angelo and Cookie come to Lucious’ house; Angelo stands up to him and says its not a social call, that he has Cookie and Lucious doesn’t. He demands to know why her parole was violated. He swears he knows nothing about it and offers to find out who did do it.

Angelo grabs his arm and Lucious gets angry; Cookie jumps in between them. Angelo’s phone begins to ring, she tells him to take it. Lucious says this is all Tariq.

Angelo finishes his call and he tells Lucious that he had to scratch his way to power, where he was born with his. Angelo threatens him, saying if he were to come after him, he’d feel pain he never experienced before. Anika is on a bus heading out of town.

Jamal and Lucious are walking to the studio, when Lucious asks him why he gets mad at him for such little things. He shows Jamal that his album needs more space and he now has a church studio. They are joking around when he hears the Devil’s chords and Tory comes on the stage; Jamal leaves very angry.
At home, Jamal is upset and frustrated that he trusted Tory, he felt they were vibing so well together.

During a nice dinner, Candace believes its time her sister had a proper wedding, causing her to reflect on her wedding to Lucious. Lucious tells her all he will ever need is her and him and their baby. Cookie swears she didn’t set this up and he says after he becomes mayor, they can revisit the subject.

Andre Lyon meets with Raphael Green, he drags over his wife, Guiliana. He asks if she knew Andre was Lucious’ son; she confirms that is him but she didn’t know he was coming there. He backhands her in the face. Andre says he doesn’t like him hitting his woman.

He tells his wife he will deal with her later; when he turns around she shoots him. Danger attempts to shoot her, but Shine kills him instead. She offers to still do business if they are interested. Andre is still interested too since they have a place in Vegas. He shakes hands with Guiliana.