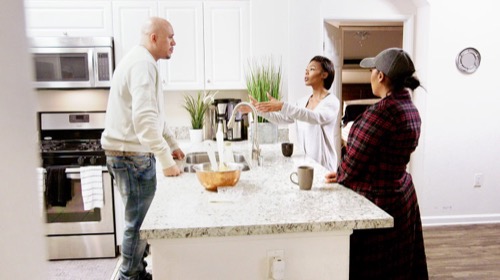 Tonight on VH1’s hit series Love & Hip Hop Hollywood returns with an all-new Monday, August 14, 2017, episode and we have your Love & Hip Hop Hollywood recap below for you.  On tonight’s season 4 episode 4, “Got Swag?,” as per the VH1 synopsis, “Masika hires Misster Ray to plan an event, only to get caught in the crossfire; concerns mount over Teairra’s self-destructive behavior; A1 considers a collaboration with Keyshia Cole; and Brooke and Booby hatch a plan to teach Marcus a lesson.”

This week on Love and Hip Hop Hollywood Masika meets up with her friend Ray to help plan her party for her new line. They are going over the guest list and Masika is including Moniece. Teairra, and Zell reluctantly. Ray tells her “Since he wants to have meet ups let’s invite him and I’ll handle him.” Masika says “Ok, but if one lip gloss goes flying I’m blaming you.”

Teairra’s friends meet up with Cisco’s friends to discuss her drinking issue. Moniece asks him “Are you in or are you out? Will you bounce if she needs help?” Cisco says “No. I will be there if she needs help.” Moniece says “ Will you be there when we have the conversation about rehab?” Cisco is a bit hesitant. He says “Maybe I should talk to her about it. She may not want me to be there during this dark period in her life.”  Moniece tells Cisco “This conversation will happen with or without you because we are worried about Teairra.” Cisco tells Moniece that he’ll be there.

Brooke meets up with Booby to tell him what happened with Marcus. She tells him “Marcus was dating his paralegal and she was telling everyone that he was getting a divorce so that the two of them could be together.” Booby says “I knew he didn’t appreciate what he had!”     He then tells her “I want you to come work on a track with me.” Brooke is impressed by the things Booby is saying to her. She tells him “Working on a track with you would be great, but I don’t think Marcus would like it.” Booby laughs and tells her “I would love to be the man to teach him to appreciate what he has.” The two embrace.

Cisco is really worried about Teairra. He asks her “What’s going on?” She tells him “Nothing.” He says “It feels different from when we were in New York.” She says “I have been single for a long time.” Cisco says “But you wanted this.” Teairra says “I do want this. I love you.” Cisco tells her “I have been to rehab for both alcohol and prescription pills.” They continue talking and eventually, Cisco calms her down and tells her “I’m here for you and I want you to know that just because I’m talking to you doesn’t mean I’m mad at you.

Marcus is trying to make things up to Brooke by setting up a romantic night to fix things. He tells her “The most important thing is that I love you and I want you.” Brooke says “I believe that you believe what you’re saying.” Marcus thinks he is all in the clear. Brooke then tells him “If I were wearing panties you would be the last person I would take them off for.” Marcus is shocked to hear this. Brooke then tells him “I’m going to the studio with Booby tonight.” Marcus is even more shocked to hear this. Brooke tells him “Enjoy the pool and have a nice night.” She then leaves Marcus at the house holding the roses he’d bought for her.

Marcus meets up with A1 and Solo and tells them about what happens with Brooke. A1 tells him “In her eyes you started it by playing the game.” A1 tells Marcus “I have a meeting with Keyshia Cole and Lyrica is on this whole trip that I can’t work with other females.” Marcus tells him “You can’t let Lyrica tell you who to work with. She is gonna have you broke.”  Solo also reveals the drama between Alexis and his baby momma on social media. He says “My baby momma is a gangsta. This is also the first time I have ever gone public with a female.”

Keyshia is preparing for her listening party by going to see Zell to get herself styled for the party. He tells her “I need to do a little reset in my life.” Keyshia asks “What’s going on?” Zell tells her about the situation between Masika and Alexis and how he unwittingly got involved. He tells her “I was surprised to get an invite to her party after all of the messiness.” Keyshia asks “Are you going to go?”  Zell says “Yeah, I’m going to hop on that olive branch and see where it leads.”

Alexis is on a photo shoot with Nikki when Solo’s baby’s mom shows up. It all breaks down as Alexis and the woman start screaming at each other. Nikki is quite stunned and has no idea who the woman is. Finally, security removes the woman. Nikki tells Alexis “You need to talk to Solo.” Alexis says “After this they are both dead to me!”

Keiysha is meeting up with her A&R Erica and A1 to talk about working on her record. A1 is excited about the meeting. A1 says “I like to work at night.” As the meeting continues they talk about the music and how the two can work together and see what can be done. Keyshia is very impressed. She tells him “We’ve been working very hard to get this record at 100%”  Erica asks “What’s your schedule looking like?” He says “For Keyshia Cole? All clear.”

Cisco decides to take Teairra to get acupuncture to help her with her drinking. She says “My problem isn’t with drinking. It’s with the people around me not being supportive of me. Having Cisco here really helps me feel much better.”

The party for Moniece’s new cosmetics line is in full swing. Everyone is having a good time. When Zell arrives Moniece tells him “I’m going to text my real friends.” Zell is pissed when he hears this. After hearing this Zell decides to act out. He lays out on one of the tables. Ray says “I don’t know where the playground is because the children are here!” This sets off a chain reaction. The fight is on between the two men! Masika is pissed. There is a lot of shouting and hollering. Both men have to be escorted out of the party by security.