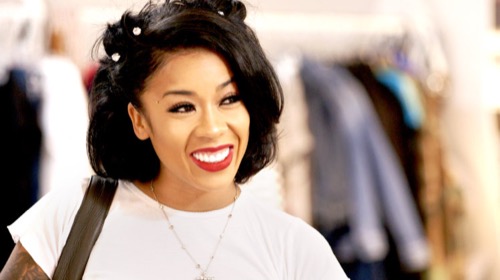 Tonight on VH1’s hit series Love & Hip Hop Hollywood returns with an all-new Monday, September 25, 2017, episode and we have your Love & Hip Hop Hollywood recap below for you.  On tonight’s season 4 episode 11, “Friends With Benefits,” as per the VH1 synopsis, “Masika plots her revenge against Zell; Hazel brings out Brooke’s angry side; Alexis pushes Moniece and A.D. to the breaking point; Nikki and Safaree join Chanel and her new love interest on a double-date; Booby tells Keyshia the truth about Brooke.”

This week on Love and Hip Hop Hollywood, Brooke and Booby are at his house in the Pacific Palisades. Brooke wants to know what Booby’s deal with Hazel is. She tells him “This whole deal with Hazel E is the most annoying thing in my life.” Booby tells her “Just do you and focus on your situation.” Booby invites her to stay the night. Brooke tells him “This is beautiful, but I do have to get back to the kids so not tonight.” Booby then says “Well how about I take you to Catalina this weekend?” Brooke is quitec receptive to this idea.

Alexis and Hazel are hanging out at a spa. Hazel tells Alexis about her mom meeting her boyfriend. She says “Rose is on hold because my mom is not feeling him.” Alexis invites Hazel to go out to a club with her and Zell. She tells Hazel “It’s a gay club though.” Hazel is okay with that. She then tells Alexis “Booby and I met up after his performance and Brokie Valentine wanted to confront me. This is my city. I have books and music out here and she is constantly broke.” Both women laugh.

Later that night Hazel and Alexis meet up with AD and Zell at the club. AD tells Zell “Moniece and I are not clicking right now. Things are so bad at home that we don’t even have sex anymore.”  When Alexis and Hazel show up the party really gets started.At first AD is really shy and tries to avoid Alexis, but then  she really gets into having fun and the four of them hit the dance floor and have a great time together. AD does not seem worried about how Moniece is going to react to her having fun with her arch nemesis.

Chanel meets up with Nikki to thank her for her help in handling the situation with Hazel. While they are talking Solo shows up and Nikki confronts him about the situation with his baby’s momma. Solo says “I had no idea that was coming either.” Nikki asks him “Are ya’ll  cool?” Solo says “Yeah we’re good.” Nikki invites him to her next event. The three of them continue talking and there is a definite vibe between Solo and Chanel.

Keyshia and Booby meet up to do some shopping for their son. Keyshia asks him “So what’s up?” Booby asks her “You mean what’s up with my love life?” Keyshia affirms that she is talking about his love life. Booby tells her about his situation with Brooke. He says “I want a real relationship and we are having trouble getting there.” He then asks her about her blind date. Keyshia doesn’t even want to go there…

Moniece meets up with Masika to discuss everything that is going on. Masika tells Moniece about the confrontation with Lyrica and Alexis Sky in the club. She says “I ended up face down ass up when Zell decided to go after Misster Ray.” Moniece pours out her own woes. She tells Masika “AD didn’t come home last night after we’d had another one of our fights. After I was safely tucked into bed my phone started going off like crazy. It was Tiffany sending me a video of AD with her hands all over Alexis. It’s causing me to wonder if Tiffany was right and AD already has one foot out the door.” Masike tells her “You need to let her go. I have learned that when someone shows you who you are you need to believe them.”

Brooke meets up with Hazel to try and squash the issues between them. When Hazel sits down Brooke says “Order anything you want, it’s on me.” Hazel tells her ‘Where I’m from we don’t throw things. We throw these hands!!” Suddenly Hazel springs up and tries to punch Brooke in the face. Brooke responds with a few good swings of her own before security separates them. Hazel tells Brooke “You’re just mad because you’re not natural like me.” Brooke tells her “Nobody wants to look like you!” Security has to drag the ladies from the restaurant.

Chanel and Solo are out on a date at a bowling alley. They are having a great time together. They are double dating with Nikki and Safaree. Chanel and Solo are getting to know each other. He tells her “I wrote songs for A1.” Chanel tells him about the encounter that she had with A1 in the club when he dissed her. Safaree and Nikki wander over and he asks “Are you two in love yet?” They both laugh.

Moniece goes to confront AD about her behavior in the club. AD tells her “I don’t even want to be at home anymore. When you met me I was in the club poppin bottles. You knew that.” Moniece tells her “I have never so disrespectful to you as to be in the club freakin on another girl. It seems like you don’t even want to be in this relationship anymore. “ AD is really frustrated. She tells Moniece “Maybe I don’t. Maybe Tiffany was right and you were just using me and now I’ve lost my friend because I chose you over her.  Moniece tells her “If you move out I told you that would be the end of this relationship.” AD is fed up. She says “Fine. So be it.” Moniece gets up and leave.

Marcus is talking to James about Brooke when she walks in the door. She comes over and says “if you don’t mind I would like to talk to Mr. Black alone.” Marcus says “No. We are having a conversation.”James leaves. Brooke says “I want to apologize for the way that i handled things.” Marcus is really angry. He tells her “I held you up as my queen. My number one and you dismissed me. You sent me away.” Brooke tells him “ I don’t want to be your number one, I want to be your only one!” Marcus tells her “I loved you, my mother loves you, my daughter loves you and then I hear from Bridget that you are out with Booby?” Brooke is stunned to hear that Bridget told Marcus about her and Booby.

Zell is working with his new client when Masika walks in creating drama. The fight is on instantly. Masika tells him “You’re doing things for attention and I was a real friend to you. I woke up to you being a snake.” Zell is furious that Masika is talking to him about loyalty. He tells her “Remember who was there when you were sleeping on my couch!” He walks out and tells her “I’m done with this. I’m leaving.”..