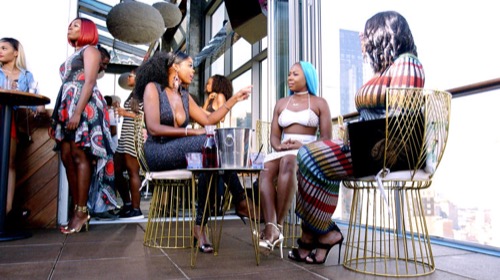 Tonight on VH1’s hit series Love & Hip Hop returns with an all-new Monday, October 30, 2017, episode and we have your Love & Hip Hop recap below for you.  On tonight’s season 8 episode 1, “Unity,” as per the VH1 synopsis, “In the Season 8 premiere, Remy Ma hosts a Unity party to celebrate her success, but Bianca can’t let go of a beef from her past; Safaree is back in a New York state of mind; Anais wishes to return to the spotlight even if it interferes with her marriage; Judy causes problems for Yandy and Mendeecees; and Rapper Brittney Taylor links up with Rich Dollaz.”

Love and Hip Hop is back in its hometown of New York for and it looks like there will be high drama as the old crew is joined by some new, but familiar, faces. What’s in store this season for our favorite crew in New York this season? Let’s find out as the journey begins tonight.

This week on the season premiere of Love and Hip Hop New York Remy Ma is arriving back in the city after a hectic tour. Remy meets up with Self at a networking party to try and unite the ladies of the Hip Hop game. She talks to Mo and Bianca about her idea. She tells them “There is always someone trying to drag you down when you’re successful.” Yandy tells her “The last time I saw Bianca I had to drag her out of a club from fighting this girl Bri.” Remy tells her “You don’t want to go down that road. It doesn’t lead anywhere positive.” Both Mo and Bianca agree.

Self walks over and introduces his new artist Dream Doll and Safaree shows up as well. They all want to know what he is doing back in New York Safaree says “This is where it all started for me and I need to come back here.

Yandy comes over to talk to Remy and catch up. She tells Remy all about her new business venture. She also says “I’m holding down home the best I can. I know my husband is sad because he doesn’t get to see his other children as much as he gets to see mine.” While the ladies are talking Yandy gets a phone call from Mendecees. After accepting the charges she tells him “You’ll have to call me back later.” When she hangs up Remy looks shocked that she didn’t take the call from her husband. Yandy tells her “I get three calls a day and we talk all day every day.”

Rich learns that he has type 2 diabetes and he is worried that he could die or lose a limb. He says “knowing I could die made me really take stock of things and I realize that I had to stop creeping and get back to the music.”

Anais is working to make her way back to the music scene. She is working with her manager Navarro, but her ambition is creating huge issues with her husband Rueben. Navarro tells her “It was a great performance tonight.”

Rich is back in the studio listening to a new artist who needs management. Rich says “You know how I feel about managing new artists. It’s drama. What’s her drama?’ He tells her “Bri has beef with Bianca. It has been going on for years.” As the two men are talking Bri walks into the room. Rich tells her “You have the look and the sound, but you don’t get along with Bianca.” Bri tells him “I’m not trying to deal with her. I’m doing this for my grandmother.” After hearing her story Rich decides to take her on.

While Yandy is on a photo shoot Mendecees calls her and the two have a heated argument. She tells him “I’m sorry I didn’t take your call, but I was hanging out with the girls.” Mendecees gets very upset and asks her “So hanging out with the girls is more important than what I have to say? I had to go get my mother to handle it because you were busy.” Yandy is exasperated with her husband. She tells him “I’m out here making money.” Mendecees tells her “I don’t wanna hear none of that.” Then he hangs up.

Safaree is out to dinner with his family. He tells his mom “In LA all they want you to do is take them out to dinner.” His mom tells him “You need to find a nice girl.” Safaree says “I’m gonna let you pick my dates from now on.” His mom tells him “I am going to give you one more chance, but you need to find a woman who is going to love and support you.”

Anais is having trouble at home. Her husband Rueben is not happy that she is trying to revive her music career. He tells her “I don’t like the color of your hair.” Anais gets angry and she tells him “You don’t like anything! You complain about everything.” Rueben says “You need to be home at a decent hour with me and your children.” Anais is not hearing it. The argument continues until Rueben asks her “Do you want a divorce?” Anais tells him “I don’t know. I have been considering my freedom.”

Remy Ma wins the award for Best Female Rap Artist. She and Pap are so happy and excited to celebrate her victory. Remy thanks Pap and all of the people at the correctional facility. After the event is over Pap and Remy are talking. She tells him “I want to get to work on my new album.” Pap has other ideas. He tells her “We need to focus on the In Vitro procedure we are about to go through.” Remy thinks she can handle both. She tells her husband “ You know that I can handle doing multiple things.”

Rich is making his reentry into the music by introducing Bri at an industry event. What neither one of them know is that Bianca is at the same event. When Rich discovers that Bianca is there he decides to try and have the two women make peace. When Bri comes back to the table she is not happy to see Bianca there. She asks her “Do you want to talk?” Bianca agrees and the two women sit down at the table. Brie asks her “Are you still trying to be like ne?” This sets Bianca off and she lunges at Bri and has to be dragged away from the table by security. Rich is not happy about the altercation. He tells Bri “I didn’t expect it to be like that.” Bri says “What did you expect from a bum B?”

Yandy is working on her photo shoot when Judy shows up. Judy sees Yandy rubbing oil on the model. “Yandy asks her “What are you doing here?” Judy says “Memdecees sent me to check up on you and make sure you were really working.” Yandy is incredulous that her husband would send his mother to spy on her. She tells Judy “We’re working here.” Judy doesn’t believe her. She is fuming. She asks “Why do you have to touch him to work with him?” The argument continues and Judy tries to smack her client. Yandy tells her “You need to go back and talk to your son and work out ya’lls issues.” She also tells Judy I need you to stop creating trouble where there is none.” Judy doesn’t believe her.