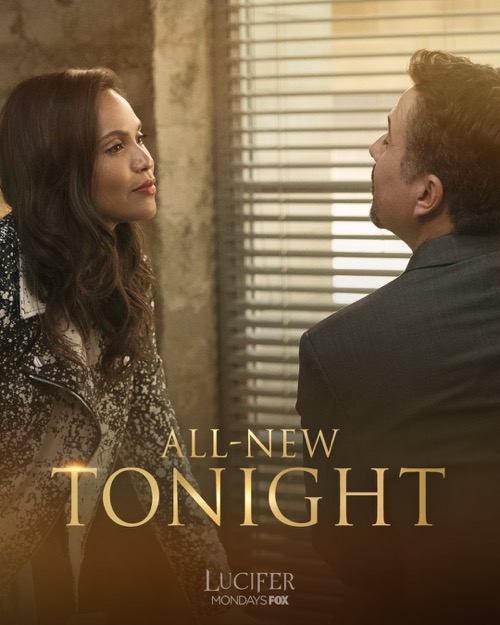 Tonight on FOX their drama Lucifer airs with an all new Monday, October 16, season 3 episode 3 called, “Mr. and Mrs. Mazikeen Smith,” and we have your weekly Lucifer recap below. On tonight’s Lucifer episode as per the FOX synopsis, “After talking to Lucifer and Linda, Maze realizes that she is looking for more out of life and decides to head to Canada for a tricky case. Chloe however, becomes concerned when she feels that Maze is being deceived by a scheming conman. Upon further investigation, Lucifer and Chloe make a stunning realization when they find that their target may be much closer than they thought.”

Maze was bored! She had become a bounty hunter because she thought it would be exciting however she’s been doing it for a while now and it just doesn’t give her the same thrill as before. Maze would find out about a bad guy and would either go get him or have the idiot come to her. But Lucifer had had a suggestion. He told her that she should follow her heart’s desire and go after the most dangerous human she could find. So Maze decided to look into some of the Organized Crime Division’s files and she came across Ben Rivers. Rivers was a wanted man and no one has even gotten close to catching him.

But Maze had liked the challenge. She found out Rivers had once killed two people in broad daylight to prove that he could and that more than anything grabbed her interest. So maze decided to go to a small town in Canada. That’s where Rivers was last seen and she had a better chance of finding him if she started her investigation from there yet Maze wasn’t exactly prepared for Canada. The country was cold and she didn’t have a single piece of clothing built for the climate because she was used to simply making leather work for her.

So a demon like Maze had sort of taken Canada by storm. She shoved a teenager’s head into a snow pile because he threw a snowball at her and she also stole his winter coat. But her real prey hadn’t been where she expected and so Maze had had to travel. She visited various cities looking for Rivers and she was making it very easy to track her. Chloe had been worried about Maze and what Maze could get up to if no one was paying attention. So, Chloe started to track Maze by the random case files that kept popping up. She would spot an assault charge here and a wild bear attack there so Chloe thought she should do something.

Chloe tried talking to Lucifer and, when she realized he was no help, she then called Rivers’s lawyer. Athena Burns had claimed she lost contact with Rivers when he went on the run though Chloe knew that was a lie because tracking Maze had helped her figure out that wherever Rivers travelled that there would be a corresponding phone call to Athena’s office from that location. So Chloe tripped Athena up and had demanded Athena tell her where he was. But Athena refused to say anything. She said that the police would never catch him and so Lucifer and Chloe decided to mess with Athena.

They told her that if she didn’t tell them where he was that there was a chance their good friend the bounty hunter was going to rip into him. But Athena had been terrified at the idea and so Lucifer had used his “gift” to get Athena talking. The lawyer had apparently fallen in love with her client and so she’s been helping him. Athena has been sending him money to keep afloat and she’s been doing everything in her power to stop the police from actually finding Rivers. So Athena had it bad and Chloe had wanted to know why Athena had crossed that line, but it turns out Athena repeated a lot of what others have said before.

They all said that Rivers could charm you into anything and that once he’s in your head that there was no getting him out. But Lucifer had thought that a mere exaggeration. He said Maze would be find because she was a killing machine however Chloe had still remained worried and had called Maze. Maze it seems had found Rivers and then he had used his legendary charm on her to get away. So Chloe thought Maze was in trouble while Lucifer still wasn’t getting it. He saw Maze one type of way and couldn’t believe she would let a guy charm her out of her senses. And so he thought Maze was just playing a game with Rivers.

Rivers had put up a challenge and so Lucifer thought Maze had gotten caught up in the hunt. But Maze had met her match. She had liked Rivers and she managed to hide that from Lucifer whenever he contacted her. Lucifer had later given her River’s address after Athena eventually coughed up to the police and he thought that Maze would go there to end things by either killing Rivers or bringing him badly banged up. So Maze had surprised everyone when she listened to Rivers long enough not to kill him because he did have something to say. Rivers said that he had been set up. He claimed that he had turned down that job and hadn’t killed the two teenagers.

Rivers said he didn’t kill children. But he also mentioned his boss hadn’t liked that answer. Rivers said that he used to work for Lt. Tomas Herrera and that Herrera set him up for the murders when he refused to follow orders. So Maze had thought Rivers was just telling her story to escape the blame yet she soon found out that she led some of River’s old bosses right to him and that the assassins were willing to kill them both. And so Maze was thinking about what Rivers said while Chloe was developing some of her own suspicions. She talked to Herrera and the way he went on about the case didn’t match up with what she expected.

Chloe decided to ask Dan to check on Maze and she also had an enlightening conversation with Lucifer afterwards. He had facetimed with Maze and she had been helping an injured Rivers, but that wasn’t the part Lucifer was concerned about. He had seen the way Maze brushed aside Rivers’s hair and how she fluffed his pillow and he had known that someone broke his demon. Maze would never have treated anyone so tenderly and so Lucifer had to convince himself how unworthy Rivers was of Maze. But talking to Chloe didn’t help. Chloe had the witness from Rivers’s case come in and the guy hadn’t seen anything.

The eyewitness kept on trying to tell her what he thought she wanted to hear and so she had made him tell her what really happened. But Rivers had been telling the truth all along. Herrera had gotten to the eyewitness and had feed him the information. So Chloe dealt with Herrera’s arrest while Maze worked with Dan on keeping him alive from even more assassins. The two used their individual skills to take down the men and they had saved Rivers’s life, but Rivers wasn’t going to return to the states. He said that Herrera wasn’t in it alone and that he would have to keep on running. And so he asked Maze to go with him.

Maze had left an impression on Rivers and he thought that they were the same. But Maze couldn’t go with him. She had made a life for her herself back in LA and so she had kissed Rivers goodbye though she hadn’t taken his warning seriously. He said that whoever was after him would go after her and Maze figured she didn’t need to be worried because she was a demon. So when Maze had gotten back home and was enjoying being around her family, someone else out there was putting her picture in the same file as Rivers.