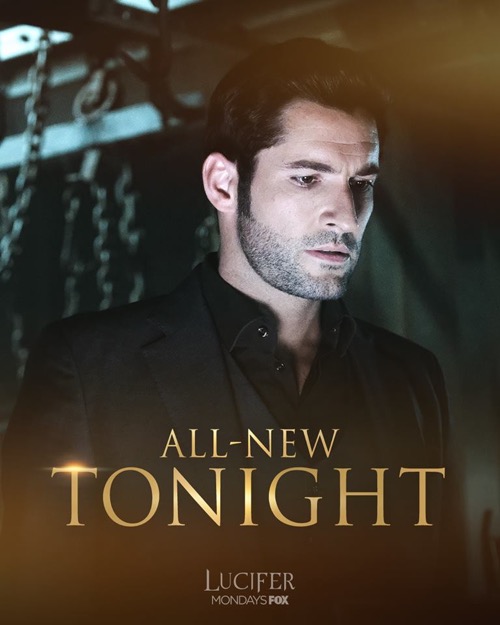 Tonight on FOX their drama Lucifer airs with an all-new Monday, December 4, season 3 episode 9 called, “The Sinnerman,” and we have your weekly Lucifer recap below. On tonight’s Lucifer episode as per the FOX synopsis, “Lucifer is worried when he realizes that recipients of his favors start to turn up dead. After he and Chloe investigate, they are finally brought face-to-face with the Sinnerman. Meanwhile, Detective Pierce returns to work after taking a bullet; Charlotte finds a new career; and Amenadiel has a new love interest.”

A young guy comes to see Lucifer at the club. He heard Lucifer grants people favors. Lucifer agrees to hear what he has to say. He introduces himself as Joey.

Lucifer is sitting down with Linda, talking about his powers with desire. She wants to know everything there is to know.

Chloe shows up at the precinct and walks in on the lieutenant. He is putting on his shirt in his office. She blushes. She would like to ask for a personal day. He tells her he will take it under advisement. She is annoyed. She leaves and meets up with Lucifer on the scene of a murder. Lucifer is surprised to see the murdered person is Joey. He confesses to Ella and Chloe that he met the young man and he asked him to do a favor for him. Ella points out that Joey died from gunshot wounds and his legs were broken post-mortem.

Amenadiel and Linda are laughing over her talk with Lucifer. Maz shows up. She missed Linda and seems surprised to see her talking to Amenadiel. She didn’t know they were friends. After Maz leaves, Amenadiel and Linda talk about it. They don’t think it is strange they are friends. Linda compliments him, he compliments her in turn. They kiss. Linda tells him this is a bad idea, but they kiss again, getting carried away on the couch.

Charlotte arrives at the precinct. She is now a prosecutor, working on their side. Chloe, Lucifer and Dan all seem taken aback. Ella details all of the expensive clothes Joey was wearing. Lucifer confesses that he introduced Joey to Frankie the Knife. Charlotte would like to be there when they speak to him.

Lucifer, Chloe and Charlotte meet with Frankie. He pretends to not know Joey. Lucifer looks into his eyes and asks him what he really wants. Frankie wants to find the killer and make them pay. Dan comes in. There is another body.

Lucifer and Chloe arrive at the murder of a woman, another person Lucifer did a favor for. She is hanging from the chandelier by her braid. Lucifer thinks someone is sending him a message.

Ella is on the scene. The victim died from gunshots to the chest. Lucifer thinks this has something to do with the Sinnerman. Chloe humors him. She doesn’t believe in this Sinnerman. The lieutenant arrives. He knows all about the Sinnerman and believes Lucifer. Chloe is upset. Obviously Lucifer and the lieutenant have talked about him. Lucifer takes off. He is going to deal with this. At home, he makes some phone calls. Maz shows up. He is happy to see her but he has a lot going on.

Ella has the Sinnerman’s DNA. Chloe is blown away. She cannot believe he is real. She looks out the window to see the lieutenant moving a table. She is mesmerized by his muscles. Ella snaps her back to reality. On her way out, Chloe bumps into the lieutenant. He offers to go with her to search out her lead. She gets frazzled and turns him down. She fumbles last minute for an excuse and tells him she wants to take Charlotte.

It is Sinnerman. He taught Lucifer. He has get him good. Lucifer cannot get out of the room. Sinnerman is not disclosing anything. Lucifer just wants to know why he is doing this. He tells Lucifer he will find out in time.

Maz comes to see Lucifer. She followed him. She is mad. She has a bone to pick with him. She opens the door. When he isn’t apologetic, she slams the door, locks it and walks away! She doesn’t leave for long, turning around to yell at Lucifer through the door. She is mad about Linda and Amenadiel. After they talk, Maz lets him out.

The lieutenant and Chloe are on a stake out. She wants to know why he cares about this case so much. He confesses that the Sinnerman killed his brother. Chloe shares the details of her father’s murder. It is all too painful. Chloe spots someone. She thinks they have their man. Lucifer calls and tells Chloe what happened and what the Sinnerman looks like. That’s him. Chloe and the lieutenant jump out of the car to run after him. They follow him into a restaurant. They spot him. A gun fight ensues. Chloe shoots and chases him. The Sinnerman runs out of the building. The lieutenant gets him at gun point. He wants to pull the trigger but Chloe touches his arm. She wants to help him. He regains control of himself and handcuffs him. Lucifer shows up. He wants to talk to see Sinnerman. Chloe tells him there will be plenty of time.

Maz shows up at Linda’s. Linda is acting weird. Maz confesses to Linda she was upset to see her and Amenadiel together. They talk. Linda reassures nothing is going on.

Charlotte is in the bathroom crying. Dan hears her and comes in. He asks her if she is all right. She shares that she is not fine. She stinks at her new role. Dan consoles her. She realizes she is in the men’s room. They laugh.

An officer leaves the Sinnerman alone in the interrogation room. Lucifer goes in. He demands the Sinnerman turn and look into his eyes. It is too late. The Sinnerman stabbed his own eyes out. He laughs while Lucifer is angry that he might never know why.