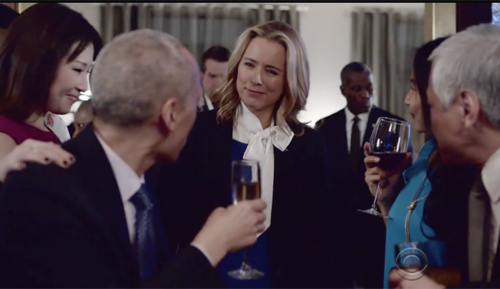 Tonight on CBS Madam Secretary airs with an all new Sunday, January 15, 2017, season 3 episode 12 called, “The Detour” and we have your Madam Secretary recap below. On tonight’s Madam Secretary episode, as per the CBS synopsis, “A bumpy aid trip to Africa is experienced by Elizabeth (Tea Leoni) and her staff when they are surprised to discover that China has arrived there first with their own development plan to offer the continent. Meanwhile, Henry is asked by the FBI to help look into a Christian cult member who may be involved in the bombing of an Illinois coffee shop.”

Tonight’s episode of Madam Secretary kicks off in Virginia, the FBI is raiding a house in the middle of nowhere – it’s rigged with bombs and there is an explosion, taking down several FBI agents. Rex Mayfield runs out of his house, shooting a gun and screaming about a Prophecy. Eventually, they manage to tackle him and take him in to custody.
In her office, Elizabeth is meeting with her team and discussing their upcoming trip to West Africa to establish partnerships with Nigeria and Senegal to get electricity to their villages and help develop their economies.

Daisy shocks everyone in the room and announces she thinks the trip is a bad idea. Congress only gave them a third of the funding that they asked for. She points out that it is their first trip under Dalton’s new administration, and everyone is going to be watching them, there is a good chance they could fail.

Henry is at home alone with the kids and having dinner. He gets a phone call from Deputy Sanchez with the FBI, she tells Henry that they arrested Mayfield and they think he is responsible for building the bomb that killed innocent people in the coffee shop in Illinois. She tells him she will be at his house in five minutes and they have something important to discuss.

Sanchez picks Henry up and tells him that he sold the bomb through the dark web to Isis. The FBI wants to work with Henry because Mayfield is a former member of the Christian cult Covenant of John. Apparently, Henry helped take down the Covenant of John cult many years ago. There’s more bad news. When the FBI raided Mayfield’s house they found evidence that he just sold an even bigger bomb – but they have no idea to who or where it will be set off.

Elizabeth McCord is in Senegal with her team giving a speech about America’s work in Africa – one of their initiatives is encouraging education and employment for women, and they are starting an all girl school.

Daisy’s predictions seem to be coming true, Elizabeth gets bad news after her speech. Apparently, President Diome has decided to pull out of his deal with America on the solar fields, and is partnering with the Chinese because they offered him better terms and are setting up an oil base in Africa.

Elizabeth meets with Diome and tries to convince him to back out of their deal with China, but Diome isn’t trying to hear her.

Elizabeth is livid that China undercut their deal and is trying to prove that they are a bigger power player in Africa than America is. Elizabeth and her team jet off to Nigeria to try and get there before Prime Minister Chen does.
And, their trip goes from bad to worse. While they are in the air, the lane loses one of its engines and they have to make an emergency landing in Togo. While the pilot is trying to get the plane down safely, Elizabeth tries to comfort a frantic Daisy.

Elizabeth and her team land at the Togo airport – and they are thrilled to have them and the Togo leader can’t wait to give her a tour of the city and their new telecommunications center. They can only get one plane to Nigeria, but there are only four seats available – Daisy is going to get stuck in Togo while Elizabeth takes half of her team to Nigeria, they have to fly coach though.

Meanwhile, back in DC Nadine and Matt have been running in circles meeting with different members of the Air Force and trying to get a secure plan to Togo to pick up Daisy and the rest of the team. In Togo, Daisy is facing just as many issues – there is not a single hotel in town, and all of the press that she has with her are basically sleeping on the streets for the night.

Henry is back in the US working with the FBI on the Rex Mayfield case. He meets with a woman who is in the doomsday cult with Rex. She is trying to get her life back on track – but Rex has been trying to contact her. She offers some insight on Rex and Isis, and thinks it is absurd that Rex would join the Islams, he just loves bombs and wants to “blow up the world.”

Elizabeth and Blake arrive in Nigeria and Prime Minister Chen beat them there too and stole their Wind Farm deal. China is making a mockery of the United States. Elizabeth finds Chen at a local event and confronts him. Chen snarks that the US isn’t so innocent. Chen thinks that Elizabeth “accidently” crash-landed in Togo to try to strike a deal since Togo just discovered a natural phosphate jackpot.

Now that Elizabeth is aware of a possible phosphate deal in Togo, she and Blake decide to fly back to Togo and meet with the President and salvage what is left of their trip.

Henry heads back to the interrogation room with Rex Mayfield, he determines that Rex has definitely not converted to Muslim. But, he thinks he is the Father of the Apocalypse and is encouraging a war between Isis and the West to end the world.

Prime Minister Chen arrives in Togo right behind Elizabeth McCord. He runs in to Elizabeth at the airport and warns her that China is gunning for Togo’s mineral rights and the US doesn’t stand a chance cutting a deal with them.

Elizabeth totally plays Prime Minister Chen, she has no plans of cutting a deal with Togo over the phosphates. But, by pretending she is interested, China makes the deal with Togo since America doesn’t have the funds. But, Elizabeth had the Togo President force China to commit to sustainable investments and helping fund female education.

Elizabeth heads home, even though she helped the people of Togo get what they deserved from China, she’s not feeling very victorious. Henry gives her a pep-talk, and then fills her in on his case with Rex Mayfield.

Meanwhile, the FBI tracks down militia members and former members of Rex’s cult and questions them, in hopes of locating the missing bomb. Little do they know, they are much closer than they think. After leaving a man named Hobbes’ house – he makes a phone call and says the FBI was snooping around and it is time to set off the bomb. There’s going to be another bombing …