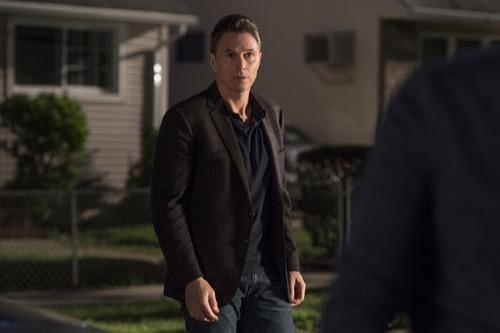 Tonight on CBS Madam Secretary airs with an all new Sunday, October 23, 2016, season 3 episode 3 called, “South China Sea” and we have your Madam Secretary recap below. On tonight’s President Dalton (Keith Carradine) remembers his time serving in Vietnam during a trade visit to the country.

Did you watch last week’s episode where with Algeria on the brink of a civil war, Elizabeth delicately negotiated a regime change, but her plans went awry when Roy Curtis (Dakin Matthews), the trusted U.S. Ambassador to Algeria, died unexpectedly? If you missed it, we have a full and detailed recap right here for you.

On tonight’s Madam Secretary Season 3 episode 3, “Elizabeth (Tea Leoni) finds herself in a stalemate with the Chinese foreign minister as she lobbies for the release of environmental activists who were arrested for spying in China; Henry (Tim Daly) urges the FBI to investigate one of Elizabeth’s former students, who he suspects is his family’s cyberstalker”

Tonight’s episode of Madam Secretary kicks off on a coral reef in the middle of the night. A passionate woman named Becca Mason from an eco-friendly group snuck on to the reef in China with her camera crew to upload a video.

China apparently took over the coral reef and is paving it and turning it in to a military base, destroying the sea life. While they are filming, the Chinese military arrives and arrests them for trespassing.

At the McCord house, Henry and Elizabeth are arguing over their family’s stalker. Henry is apparently upset because Liz didn’t tell the FBI about a student that was stalking her years ago named Ray Merchant. Liz argues that Ray was brilliant and Bi-Polar and she doubts he is responsible for what they are dealing with now.

The next day Elizabeth heads to the office, she’s briefed on an upcoming summit with Vietnam – and how Becca Mason’s arrest on Chinese territory will affect it. Liz says that the coral reef issue doesn’t have anything to do with her summit.

Daisy and Nadine are putting together a statement trying to support China taking over the reef. Jay points out that China is just being greedy and they are going to cargo fees from all of the ships passing through.

Elizabeth video chats with the Chinese minister to discuss the Becca Mason issue. Liz points out that no country is even acknowledging their new annex to their country, so technically it’s not trespassing. Prime Minister Ming says he won’t be releasing Becca and her people, and they are trying them as spies.
Henry heads to the FBI to fill them in on Ray Merchant.

He admits that Ray hasn’t actually contacted Liz, but he constantly is ranting about her on social media and her public policies. He even went as far as to call Liz a criminal. Henry argues that Ray has means and motive, but the FBI basically brushes off his theory on Ray.

Elizabeth meets with President Dalton – he wants her to call off her summit until the Becca Mason situation is taken care of. Liz doesn’t like the way that China is handing the activists on the coral, she thinks they are using the issue as a way to make the other countries acknowledge the territory that they are claiming in the middle of the ocean.

Liz wants to go to the Vietnam Summit, and she wants Dalton to go with her – just to send a message with China that they are not going to play ball. Russell thinks it is a great idea, and it will be helpful in his campaign as an independent runner.

Elizabeth and Dalton head to Vietnam for the summit and their trip is a success. Liz makes it clear to the Vietnamese leaders that they are on the same team, and don’t want China to become any more powerful than they already are.

Later that night at the hotel, Dalton opens up to Liz about his time in the Vietnamese war, and he gets emotional as he recalls almost shooting a woman holding a baby on accident.

The Chinese Prime Minister Ming Chen arrives at the hotel and demands to speak to Elizabeth – he’s in a huff over the US’s new deal with Vietnam. Elizabeth tries to tug at Ming’s heartstrings and reminds him that the activists and Becca Mason are innocent and they need to be released. Ming doesn’t want to hear it, he says that they will go to trial for espionage soon.

Back in the US, Henry is up late and the lights in the house begin flickering, then the TV turns on, soon the house’s alarm goes off. The kids race downstairs to see what is going on and the guards outside rush inside with their guns drawn – but no one is in the house. It seems like everything in the house has gone haywire, even the ice maker on the fridge is spitting ice cubes out on the floor.

It turns out that someone hacked the house’s alarm system and anything technology-related in the home. Henry is furious – he rants at the FBI that it is time for them to start doing their jobs. Liz arrives back in the US and learns that a journalist is trying to run a story on a security breach at their house. Daisy says that she is trying to get them to drop the story.

Nadine has bad news for Elizabeth, apparently China is being very petty. They are flying their fighter jets ridiculously close to American ships, and apparently they are also taking back the Pandas that they donated to the American Smithsonian.

Liz heads in to her office, Jay and Ray Murphy are waiting for her. Murphy is the leader of the Ocean Relief Foundation, the place where Becca Mason was working. Ray is furious because someone hacked his organization’s servers and deleted years of files and work.

Murphy thinks that the US hacked their servers, and they deleted their information because America is business partners with China and wants to keep the reef quiet.

Elizabeth has someone from cyber security look at the Ocean Relief Foundation’s hack job and confirms that it looks like China’s work. Cyber Security reveals that Becca uploaded videos to Ocean Relief’s server before she was captured, and whatever was on the video the Chinese erased because they didn’t want any one to see it. They are working hard to try and recover the videos.

Russell is FURIOUS when he learns that China is taking back the pandas from the national zoo. Apparently he watches the panda’s live feed on his computer all day. He tells Elizabeth’s team to get on it ASAP and save the pandas.

Ronnie Baker from the cyber team arrives at Liz’s office with the videos of Becca Mason. Elizabeth watches the videos and realizes that Becca’s team captured some military equipment in the background.

She takes the video to one of the army captains and learns that it’s a missile launch pad, taking over the reef had nothing to do with trade or cargo – China is getting missiles in to position, and they are clearly willing to do anything to keep it quiet.

Elizabeth gets Prime Minister Ming on the phone – she lets him know that the US knows all about the missile launch pads, and the US never would have approved that. Liz threatens to tell China’s neighbors about the missile launch pads, if they don’t cooperate and release Becca Mason and her team – she also adds that there is no way that they are giving back the Pandas.

Elizabeth thinks her chat with China went well, but a few hours later, one of China’s jets flies too low and crashes in to an American ship – 3 American soldiers are dead. Obviously, Dalton and his team want to make a move on China.

Liz argues they need to play it safe, most likely Ming’s orders hadn’t gotten down to the army yet and they weren’t even aware of the fact that they had buried the hatchet with the US and were working on terms of an agreement.

Henry decides to take things in to his own hands and has his friend Jose look in to Ray Merchant – the FBI finds out that Henry is getting involved in his investigation. The FBI agent pays Henry a visit and tells him to back off, they looked in to Ray and there is no way that he is responsible.

President Dalton holds a press conference, he announces that the US will not be engaging in war with China, and their thoughts and prayers go out to the soldiers that were killed in the incident. A few hours later, China releases Becca Mason and her team. It looks like every thing worked out in the long run.

Liz heads home after a long day at work – she lectures Henry about getting involved in the FBI’s investigation in to their stalker. Henry knows he screwed up, but he is sick of sitting around and waiting for the stalker to make their next move. He’s scared for their kids.

“I don’t like you going to a country that’s preparing for a war.” –Henry #MadamSecretary pic.twitter.com/dfVCzEeSL2