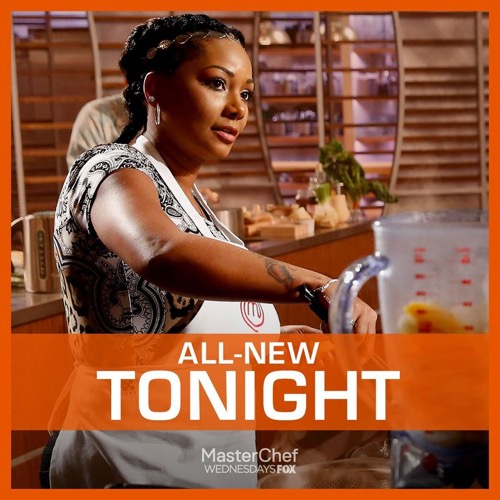 Tonight on FOX Masterchef returns with an all new Wednesday, August 2, Season 8 episode 10 called, “The MasterChef Returns,”  and we’ve got your MasterChef recap down below! On tonight’s MasterChef Season 8 episode 10 as per the FOX synopsis, “Reigning champion Shaun O’Neale returns and chooses ingredients from his cookbook to be part of the mystery-box challenge. The winner will receive an advantage moving forward, while the other chefs to battle in a coconut-theme elimination challenge.”

MasterChef begins tonight with Chef Gordon Ramsay, Chef Christina Tosi and Chef Aaron Sanchez greeting the top 13 homecooks. Chef Ramsay welcomes America’s MasterChef Season 7 reigning champion Shaun O’Neale. He says he has been cooking all over the world and been on the MasterChef cruise but the most exciting thing he has done is release his very own cookbook “My Modern American Table”.

Christina says its time for the next Mystery Box challenge, Shaun counts to 3 and reveals some of his favorite ingredients from his cookbook, including the protein that won it all for him: Venison Tenderloin. Shaun will be cooking alongside all of them, he heads to his station and they are given 60 minutes to make a spectacular dish using the ingredients Shaun selected plus their staple pantry box.

Shaun is called up first. He has made spice rubbed Venison with parsnip-garlic puree, chimichurri and pear puree. Everyone is very impressed calling him an artist and chef master. Christina says there are 3 dishes they really want to check further that impressed them and she calls Caitlin first.

Caitlin’s dish is pan-seared venison loin with butternut squash and parsnip puree and blackberry sauce. Christina says the cook on the venison is a beautiful mid-rare, she loved what she did with the Brussel sprouts, great complexity, the puree is luscious and deep but would look more stunning on a white plate. Shaun says its looks beautiful and tastes amazing, perfect cook on the meat but the puree could have been smoother. He says its a great dish.

Aaron calls Yachecia forward, who is thrilled to be in the top 3 again. She made seared venison with butternut squash and parsnip puree with a blackberry sauce and Brussel sprout slaw. He loves the color, the coating and the crust of the venison, but the puree is confused on what it is but says the slaw is what makes the dish memorable. Shaun says the venison is delicious, the sauce is just sweet enough and the slaw is absolutely amazing; he would only work on the finesse.

Gordon says the final dish they want to look at is from someone who went bold and asks Cate to step forward. She made a spice rubbed venison with celery root puree, caramelized shallots, glazed carrots with parsnip chips and blackberry sauce. Visually looks like art and one of the best tasting dishes of the night, the venison is like butter and its a dish Chef Ramsay would put in a restaurant of his. Shaun says it tastes a lot like his finale dish, the venison is cooked great, loves the carrot and the sauce is delicious. He says the only thing he would do different is make the puree smoother.

The judges return and say all three of them made them very proud with 3 restaurant quality dishes. Shaun is given the honors of announcing the winner and he congratulates Cate. Everyone thanks Shaun for being there as he returns to the bright light of Las Vegas.

Cate is safe from elimination and the entire competition is being placed into her hands. She doesn’t get to choose the ingredient but she gets to decide which dish each homecook will be making. Chef Gordon Ramsay lifts a glowing dish and reveals they will be cooking with the almighty coconut. Tonight they will all have to make a dish starring the beautiful coconut.

Chef Aaron Sanchez says they will have to make either a sweet or savory dish but that decision will be made by Cate and the homecook who fails this challenge will be going home. Cate thoroughly enjoys trying to sabotage everyone of her top competitors, while giving others exactly what they want. She is sent to the balcony for the competition to begin.

Everyone scurries through the pantry and everything is coconut; Chef Aaron gives them just one hour to create one incredible coconut dish, Chef Ramsay starts the count down. As the homecooks begin creating, Jeff begins to get stressed as he is not a baker. His cupcakes aren’t rising and he begins to panic, the same with making cannolis last week, he choked! Reba has never cooked with coconut, the only thing she’s ever had with coconut was a drink served in a coconut.

Christina comes to talk to Jeff, telling him its no problem, he needs to talk it out. He has just over 10 minutes and tells her his plan and she tells him to go. Dino jokes that he looks good in pink and he knows his desserts so Cate did not make a fool of him. Christina is nervous about Jeff as either this will be the greatest come back or he could be going home tonight.

Dino is up first, he made a coconut cream puff with earl grey, chocolate, coconut cream and rum. Chef Ramsay says its looks like is it surrounded with his grandmother’s ashes. He takes a bite and says the dish sums up him. Its weirdly delicious, light creamy texture and restaurant quality. He said he would only change hollowing out the cream puff. Christina tastes it and says its delicious, smooth and creamy and he clearly let his imagination run wild and everyone out there should be scared.

Jeff made a deconstructed cupcakes with candied almond-raspberry crumble. Chef Ramsay says he is sick of the word “deconstructed” as its just a word to cover up an actual mess. He tastes the food and says the mix is cooked but tastes dreadful and the garnish is confusing and is his worst performance. Jeff says he is not done and his journey isn’t over with this dish and Ramsay says he doesn’t think he will have another chance.

Eboni comes up confident with her dish. She made Lobster and Shrimp Curry with coconut-lemongrass rice and fried plantains. Chef Aaron tries it and says the curry is dynamite, the lobster is perfect, the rice is delicious and the plantains are textbook but it needs more herbs to wake up the dish. Christina says overall its a strong effort.

Newton presents coconut crusted snapper with sticky rice, coconut-lime beurre blanc and avocado salsa. Chef Ramsay says it looks like he walked up to a $5 buffet. He is confused that Newton is taking him all over the place.

Yachecia brings up coconut lime tart with chocolate-coconut crust and coconut meringues. Aaron loves it, saying it looks professional but the baked meringues don’t make a big impact on her dish. People should fear her with both savory and sweet.

Caitlin comes up with her dish, she made sweet and savory pork butt over cocnut rice pilaf, mashed sweet potatoes and broccolini. The pork is under cooked and is dreadful, the rice was delicious, the puree tastes good but its the worst dish she cooked.

Reba brings forth her savory dish. She made coconut shrimp with asparagus and coconut sauce. Chef Ramsay says its looks dreadful that looks from a buffet in 1984. The shrimp is over cooked and rubbery and the coating is falling off; the asparagus tastes good but he spits out the sauce saying its too sweet. He isn’t happy with the dish.

Daniel hopes this is his chance to shine now. He made Coconut seafood soup with crab, lobster and snapper and coconut rice. Chef Christina tastes it and asks Daniel is he is kidding her. She says the broth is out of control, he nailed the rice and she wants to know what took him so long. She is impressed and tells him he did a nice job.

Cate is called back down and Christina announces there were two outstanding dishes from Daniel and Dino. The bad news is they need to say goodbye to at least 1 homecook. Caitlin, Jeff, Reba and Newton are all called forward, everyone single one of them performed horribly tonight. Caitlin and Newton are told to return to their stations.

Jeff and Reba are told only one will squeeze into the top 12. Chef Ramsay says the home cook leaving tonight is Reba. Jeff hugs Reba and Ramsay says he is sorry to see her leave, there is so much respect for her in the room. She has really given everyone in the room her work ethic, that if they want something in life to get off their butts and work for it. He tells her they will miss her as all the home cooks have tears in their eyes. She tells all the home cooks to never forget who they are and anything is possible. Eboni cries and tells her she will miss her.