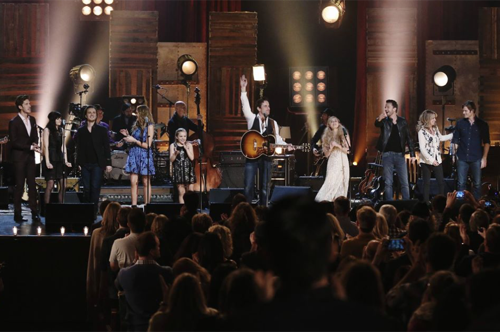 Tonight on CMT Nashville starring Hayden Panettiere returns with an all new Thursday, January 5, 2017, season 5 episode 2 called, “Back in Baby’s Arms.” and we have your weekly Nashville recap below for you. On tonight’s Nashville episode, as per the CMT synopsis, “Rayna (Connie Britton) asks Deacon (Charles Esten) about making a concept album together; and Scarlett  (Clare Bowen) struggles to trust Gunnar. (Sam Palladio)”

The Nashville Season 5 premiere Part 2 kicks off with Scarlett and Gunnar in bed together. Gunnar’s phones has been going off all morning, Scarlett grabs it and realizes that it is Autumn blowing up his phone. Scarlett snarks to Gunnar that he can go back to Autumn whenever he wants.

Gunnar gets up out of bed and reassures Scarlett that autumn may have been texting him, but he hasn’t been answering her. Gunnar tells Scarlett that they “are a thing now” and he wants to leave the past in the past, he convinces her to get back in bed with him.

Rayna returns home from her road trip and Deacon is thrilled to see her, even though she is a day early. The girls are out for the night, it’s just Rayna and Deacon.

Will is out to dinner with Kevin, the waiter surprises him with a piece of birthday cake. A famous clothing designer named Jakob fine stops by their table and flirts with Will right in front of Kevin, he invites Will to one of his private trunk shows.

Rayna feels like a whole new woman after her trip. She tells Deacon that she has a plan, she wants Deacon to write a record with her about their love story – just the two of them.

The next day Rayna heads to the office and meets with Scarlett and Gunnar to discuss their album. She’s working hard on getting it released, Rayna says that she wants to start promoting their single “All Of Me” and Gunnar is thrilled, Scarlett on the other hand, doesn’t seem to be too happy about Rayna’s song choice.

Scarlett heads home and listens to “All Of Me” on repeat. In the chorus Gunnar sings about a girl’s “Golden Eyes.” Scarlett has blue eyes …Will Lexington plays a gig at a

Will Lexington plays a gig at a sold-out bar, the audience is full of young guys who are throwing themselves at Will. Kevin definitely notices. Afterward, Kevin and Will discuss Jakob Fine’s trunk show. Kevin encourages Will to go, he says that he trusts him.

Rayna fills Bucky in on her plan to do an album with Deacon about their love story. Bucky thinks it is a horrible idea but Rayna won’t take no for an answer. On her way home, Rayna gets a phone call from tech guru Zach Wells. He says that he will be in Nashville in a few weeks and is interested in the country music business and wants to meet up with her.

When Rayna gets home, Deacon has bad news for her, he’s decided he doesn’t want to do the album with her about their love story. Deacon just got out of a really dark place, and he isn’t ready to relive it all for an album. Rayna convinces him to “think about it,” but it doesn’t look promising.

Deacon pays Scarlett a visit. Scarlett confesses that her relationship with Gunnar is rocky – she thinks she is going to screw things up because she is waiting for the other shoe to drop. Scarlett lectures Deacon about doing the album with Rayna, she thinks that he is foolish if he turns down the opportunity. Juliette’s recovery is not going smoothly. She may be getting better physically, but she is concerned she will be crippled the rest of her life. She rants at Avery that she is useless and can’t even take care of her own daughter. Juliette announces that she is going to find the woman who saved her the night of the plane crash and thank her in person.

Juliette’s recovery is not going smoothly. She may be getting better physically, but she is concerned she will be crippled the rest of her life. She rants at Avery that she is useless and can’t even take care of her own daughter. Juliette announces that she is going to find the woman who saved her the night of the plane crash and thank her in person.

Later that night, Deacon still hasn’t given Rayna an answer about the album. She hounds him to make a decision.

Avery stops by Gunnar’s house to get some of his stuff since he is staying at Juliette’s to help her with the baby. After Avery leaves, Scarlett corners Gunnar and demands to know who the song “All of Me” is really about. She scoffs that Zoey has “golden eyes,” not her. Gunnar thinks she is being ridiculous, it’s just a song, he storms off.

At the office, Bucky introduces Rayna to their new social media manager, a nerdy kid named Randall who is borderline obsessed with Rayna.

Deacon pops up at the office, he tells Rayna he has a gig, Avery is producing a show for a girl named Ashley Willerman. Rayna is upset that Deacon is working with Avery, she wanted him to work on an album with her. Deacon argues that it is just for a few weeks, and it doesn’t mean that he has ruled out their joint album.

Will shows up at Jakob’s private trunk show at a mansion. Jakob takes him upstairs to one of the bedrooms to show him some of his men’s suits. He shamelessly flirts with Will, and tries to kiss him. Will pulls away, and says that he is seeing someone and shuts Jakob down.

That night, Scarlett is sitting up in the livingroom in the dark. Gunnar tries to get her to come back to bed. Scarlett is still upset about the song about the “Golden eyes.” Scarlett accuses Gunnar of hooking up with girls like Zoey and Autumn just to hurt her feelings. She screams that singing that song makes her want to “slap the living hell out of him.”

Deacon apparently has caved, Rayna finds him in the livingroom with his guitar, he’s writing a song for their album. Deacon snaps that he is only doing it because Rayna forced him in to it, and got mad at him when he said he wasn’t in to it. Deacon explains to Rayna that it’s her world and he is just living in it, and it’s not easy that he never gets to make any of the decisions. They argue, and Rayna storms off.

Will heads to Gunnar’s for a late night snack. Will is upset about his run-in with Jakob, he’s not sure if he should tell his boyfriend about the almost kiss. Gunnar warns him to just keep it to himself.

Scarlett heads out to breakfast with Deacon to get advice about her fight with Gunnar. Scarlett confesses that she doesn’t want to be “mean like her momma” and punish Gunnar for the past. Deacon reassures Scarlett that it is just a fight and they need to get over it and move on.

Juliette is sitting outside of a church – she meets the pastor and describes the woman that saved her the night of the plane crash, she’s a member of the congregation. Juliette wants her number, she learns the girl’s name is Hallie. The pastor says that Hallie wants her privacy, but he promises to give Hallie Juliette’s phone number in case she wants to reach out.

After her talk with Deacon, Scarlett makes amends with Gunnar and they head to the radio station to perform their new song “All of Me” live.

When Rayna gets home, there’s a huge vase of flowers waiting for her.

Will surprises Kevin with a new suit, he reassures him that nothing happened with Jakob. Kevin is thrilled that Will wants to be a one man guy. Will unexpectedly blurts out that he thinks he and Kevin should move in together.

Rayna tracks Deacon down – she explains that their relationship is the most important thing in the world to her. She can’t imagine doing anything without him, and apologizes if he felt like she was pressuring him in to the album. Deacon surprises Rayna with a song that he has been working on about their relationship for their album.

Rayna thanks Deacon for the flowers – but he’s confused, because he didn’t send her any flowers.
Tonight’s episode ends with someone sitting in a car and watching Rayna from across the street…Rayna has a stalker.