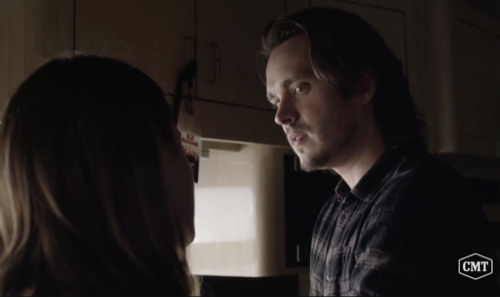 Tonight on CMT Nashville starring Hayden Panettiere returns with an all new Thursday, August 3, 2017, season 5 episode 21 called, “Farther On” and we have your weekly Nashville recap below for you. On tonight’s Nashville episode, as per the CMT synopsis, “Juliette shoots a mascara commercial but takes issue with the direction; Deacon gets invited to play the Opry, but hesitates; Avery and Gunnar embrace life on the road.”

It’s early morning and Deacon is being text repeatedly. He’s tired and runs down and Steve wants to know if he will play the Opry. Meanwhile, Alyssa is getting Maddie in a dress for her Mascara 24 commercial. The company’s execs show up to give her flowers. They would love to see her at their party tonight. She reluctantly agrees.

Avery just got off stage. He’s signing autographs and dealing with angry Juliette on the phone who is making tea. The baby might be sick and Juliette could catch it. She needs to be in the studio soon to record.

Maddie and Daphne are hanging out while Maddie complains that she is tired. Deacon comes home. Maddie asks him if he wants to go to the party. He’s tired and he has more work to do. He tells them that he is going to play the Opry.

Maddie is at her party. She is tired. Alyssa gets pulled aside. The CEO doesn’t see a connection between Maddie’s song and his company’s mascara. They cheer for Maddie to sing, but Alyssa tells them she needs to go home. Alyssa gets up on stage instead. She has a surprisingly great voice and the crowd is happy. Maddie watches with a smile from the door before slipping out.

Jessie and Deacon are talking. She can’t believe he is playing the Opry. He isn’t excited. He is overwhelmed and has so much going on. He doesn’t know why he keeps going with the studio. Is it for the girls? The artists? He just wishes he could talk to Rayna again.

Avery is fighting with Juliette on the phone again while he is on the tour bus. He’s begging her not to do something. His female bandmate hears. When he gets off the phone he is irritated. She isn’t after talking to her significant other. He wishes he didn’t have to deal with J’s problems. It’s in his job description. Fun is in female bandmate’s description. Avery seems jealous.

Maddie continues to try and shoot her commercial. The director keeps yelling cut and making her try again. When she finally gets it, her hair was in her face. The director yells, throwing his script at the ground. Alyssa interrupts. Maddie needs a break. Alyssa gets pulled aside. The execs want Maddie to change her lyrics. Alyssa will see what she can do.

Deacon is rehearsing for the Opry. Zach calls him angry. Maddie had a meltdown on set and they sent her home. Zach needs him to deal with this asap. Deacon arrives home to see Maddie crying in her room. She pleads, “Don’t make me do this.” He tells her it isn’t him. She explains that this song came from the bottom of her heart. She can’t change it.

Deacon shows up at the studio to meet with Zach and Alyssa. Deacon tells them she doesn’t want to change the song. They tell him he has no choice. Maddie doesn’t either. It’s in the contract. Deacon blames Zach. When he did his pitch, he didn’t point this out. Zach tells Deacon if he can’t get Maddie in line he is done with the studio.

Avery is on stage in Houston. His bandmate watches from backstage. She sees Avery’s phone light up. It’s Juliette. She flips the phone over. Avery gets off stage and ignores the next call from Juliette. Gunnar, Avery and his bandmate head outside to grab a drink. She lectures Avery and Gunnar on tryong to solve every problem their girlfriends have. She looks at Avery and tells him if he needs anything she will be at the bar.

Deacon meets with Scarlett, Will, Maddie, Gunnar and the others to talk about the contract and Maddie’s song. Deacon wants to get their input. They all think changing her lyrics isn’t fair. They wouldn’t want to change their songs. Deacon explains that Highway 65 could go under if Zach walks. They tell Deacon it’s his decision.

Deacon is headed out. He tells the girls goodbye. Before he leaves, Maddie catches him. She is torn. She doesn’t want him to do anything to ruin her mother’s dream.

Jessie finds Deacon. She tells him to get in the car. She drives them to a field. She tells him to get out and go walk through the trails. Take an hour for himself. He gets out after they argue. She locks the door. He takes off. He hangs out near the pond and takes a nap. He wakes up to Jessie sitting on a rock. They head to the car and get in. Deacon thanks her. He explains that people ask him if he is okay when what their really thinking is – when is he going to move on with his life. “He can’t,” he tells Jessie. She explains to him that Rayne would not want him to live like this, to waste the one life he has.

Deacon meets with Zach. He tells him that their done with the branding. He needs to do what he needs to do. Deacon gets up and leaves.

Avery and Juliette talk on the phone. She tells him she is lucky to have him. They patch things up, both smiling as they hang up. On the tour bus, Avery’s bandmate offers him a less complicated deal. He thanks her and awkwardly backs away.

The girls walk Deacon to the Opry stage. He comes out with his guitar and talks about missing Rayna. He dedicates his song to her and begins to sing Without You. He performs his last song to a standing crowd. Zach and Alyssa watch from the side and are both humbled. Deacon gets off stage smiling and hugs the girls before hugging Jessie. Daphne looks upset when she sees them embrace.